Adam Smith's reply to Mr. Ganderson, on the PanicFest as a cult 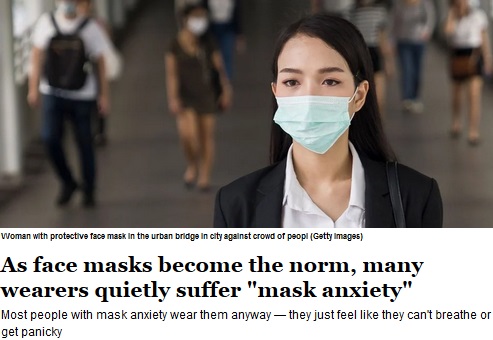 No, I wouldn't call it anxiety, in my case. I'd call it being fed up!


I thought this was another good long comment that deserved to be read by other readers who may not click to read comments. It's also from the thread under this post.

Note that the ideas about this PanicFest resembling, or BEING, a cult phenomena were originated by Mr. E.H. Hail in various of his many posts on the subject on his Hail to You blog.

I hope this letter finds you well,

I'm sorry to hear that New England is doubling down on panicfest. It seems the true believers and the panickers want to amplify the insanity, forever. I can only imagine how depressing and troubling it must be for a sane gentleman like yourself to witness this in your daily interactions. I am watching from afar, well isolated from the nonsense, and I too find it deeply troubling.

[Mr. Smith has a link here to a Lew Rockwell article called "What are we going to say to the Children?" by Mark Sircus.]

For example, one effect of panicfest that I find horribly troubling (as per the above link*) is that adults aged 25-44 saw the largest increase in “excess” deaths from previous years, a 26.5% jump. It has been suggested that the shocking increase in deaths among this cohort is attributable primarily to deaths of despair or deaths linked to the so called “lockdown” measures. According to the CDC, 100,947 excess deaths were not linked to the most sinister of viruses.

I believe, as does Mr. Hail, that Covid, peace be upon It, is a state sponsored religious cult. I do not believe this is an organic occurrence. I believe we are witnessing a global mass hypnosis, traumatic mind control event. This is why, as you say, "They are impervious to evidence...", and they will remain so. Their amygdalas have been hijacked, their rational minds have been bypassed and their behavior is being controlled by the manipulation of their subconscious minds. They are receptive to continued suggestions by the constant messaging, and other cues. I'm sure you've heard the radio, watched the TV, read the news, seen the signs, heard the background noise played in the stores...

"Social Distancing", "Virtual Learning", "Testing", "Stay Home, Stay Safe", "Cases!", "New Normal", "Pandemic", "Reopening", "Protect your family from the coronavirus with a flu vaccine", "Lockdown", "Believe the science", “SaveLives!”, “We must defeat this virus before we can fix the economy”, “Listen to the guidance”, “Stop the Spread”... These are not the best examples of the way the hypnosis words are used, but I'm sure you get the idea. The messaging and cues are ubiquitous.

Everything is laced with these buzz words and clichés promoting panic. The face diapering is a powerful symbol to the believers and those who have been entranced that they should remain in fear. Most dangerously, they believe anyone who is not in the cult is a threat who must be dealt with as such. It's instructive that they refer to us "corona deniers" in such denigrating terms.

I am unfortunately not surprised by these troubling developments. As a ponerologist I often view events and human behavior through what I call the Milgram/Asch lens. The vast majority of people will do exactly as they are told (including horribly evil acts) when told to do so by people perceived to be in positions of “authority” (Stanley Milgram) and most people do not have the courage to believe their own eyes if it means deviating from the collective opinion of strangers or peers (Solomon Asch). I also believe that primary psychopathy is not limited to a mere 1% of the population. In my opinion about 6% or 7% of the population have what I call primary psychopathy while another ~10% have what I call secondary psychopathy.** With this in mind it seems ominously easy to engineer such a mass hypnosis event provided you have control of some powerful institutions and an apparatus by which to disseminate your official propaganda. At the same time, all dissent must be ridiculed, censored, or beaten out of the wrongthinkers (when necessary). (Looking at you New Zealand.)

I agree with you when you say “I think what's happening is that there are largely two camps”...

In the Milgram and Asch experiments there are a small portion of the people who do not follow orders and those who will believe their own lying eyes. There are some people who are less susceptible to hypnosis. Most people are what I would call “authoritarian followers” while some smaller number of us are libertarians. I think these are primarily the two different camps.

Unfortunately, I do not know how to fix the sizable problem at hand. Like other recovering members of any dangerous cult, these people will have to be unhypnotized and deprogrammed. When the dominant part of a society is in the cult... well... interesting times are upon us...

Fortunately, we are not alone. There are pockets of resistance springing up. Many people are growing weary of the restrictions and the obedience training. This insanity cannot continue forever. Please try not to worry and please do not let these troubling developments scare you. Worry and fear are usually not helpful, and can often impair our judgment.

Perhaps there are ways we can reach some of our hypnotized brethren? It will likely have to happen just one person at a time as we do not have control of the all powerful electronic hypnotist.

Though I wish we did.

I hope you have a great day Mr. Ganderson.
And I hope you feel better soon.

* I've no idea how accurate these numbers truly are, as there are so many fraudulent numbers flying around these days. I didn't have time to fact check this. Sorry if it is not entirely accurate.

** Primary psychopaths are the real nasty evil manipulators that truly have no conscience. The secondary psychopaths are those other folks who do have a conscience, but are more concerned with climbing the hierarchy. They will do horribly evil things when told to or if it will advance their career or sometimes just for kicks. They will rationalize away their evil behaviors. Together they make up about 16% of the population. Many of them end up in prison, or do not have the power to harm people on a large scale, but many high functioning psychopaths and sociopaths become powerful people with the power and capacity to inflict immense destruction. They are over represented in positions of power.

I've got plenty of blogging of my own on stupidity to come. This apple device just sent me a nasty message on the election. Nothing's over yet, just because the Associated Press says it is. I'll have more on that, but I've got another post cooked up about a "learning unit" I had to semi-endure recently. That'll be later today.

I rode through town the other day and saw a college student walking, by himself, wearing a face diaper. Makes no sense to me and it looks silly. Also, walmart put the mask sign back up in celebration of President Harris' impending coronation.

Ponos, Moros, Megaera, and Alecto are great names for computers Robert, a little dark perhaps, but I like them.

I think you guys found this page...

I wonder if any of the other 1302 websites hosted on that server had trouble connecting the other night.(?)

Mr. MBlanc, I agree with you about people being hardwired for religion and the incredibility of Christianity. They say it takes mythology to hold a society together, and America's foundational mythologies have been unraveling for some time now. ChineseFluPanic does not serve society well as a foundational mythology. It doesn't unite our people like Columbus, George Washington's wooden teeth and the moon landing once did. Unfortunately, America will remain deeply divided under Multiculturalism, SJWism and 1619ism. If we are ever to be reunited we need better mythology.

Gee, I would have gone for George, Andrew, Shirley, and Pepsi.
Robert
PS: Yes, Mr. Moderator, that was indeed the problem. Thank you!

Re: Mr Smith and ponerology. One time the group I was working with got some money for new computers. They delegated me to do the work, so I got to name them. Big mistake. Ponos, Moros, Megaera, and Alecto, are the names I remember.
MBlanc46
PS People are looking for religion. Tens of millions of us have abandoned Christianity since WWII. We simply did not find it credible. But humans are religious creatures. They seek an underlying pattern in the universe. If they don’t find it in the faith of their fathers, they’ll look for it elsewhere. They’re finding it all over the place. Eastern religions were big for awhile. New Ageism, which to me is no more credible than Christianity. Political and politicized beliefs are taken up with religious fervor. Environmentalism is a prime example. Feminism is often pursued with religious enthusiasm. Most of SJWism is substitute religion, so far as I can tell. Chinese flu panic might be considered a sect of SJWism.
Moderator
PS: Robert, that may be "caching" in your memory for that browser and that exact URL from the problem 2 days back. That message is what I was getting then, but I'm guessing when you typed it in without ".index.php" (or came from a link) without the ".index.php" it had been fixed.

Can you try a different browser or device? It's will likely show again anyway, after a while, even if you don't.

Thanks for pointing it out, though.
Robert
PS: Sir, something is still off with your site. (Or, perhaps, it is on my end; since others seem to be getting through OK.)

If I go to https://www.peakstupidity.com/index.php
everything works fine.

But https://www.peakstupidity.com
gives me a message about 'Future home of something quite cool'

Perhaps a permissions problem with the home directory?

P.S. Mr. FRATELLI, I agree, but with a little luck the Covid will now go away. The evil orange miasma has been exorcised.
But, who am I kidding? We are proper fucked.
FRATELLI
PS Biden won. We re fucked.
Ganderson
PS Thanks Mr. Smith. Hard as it is I’ll try to keep my chin up. News today from our dystopian commonwealth is that we are required to wear face diapers while playing golf. Outside. Stupidity nowhere near peak