Corporate liars, learning units, and violence in the workplace 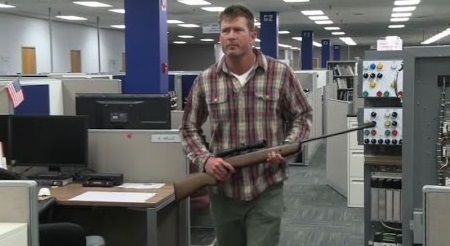 It was time the other day to get started on some recurrent learning for my job, done on-line, of course. That was the case for this stuff even way before the Kung Flu. OK, it is mostly stuff that I do need to review, and I take it seriously.

About the only thing I usually don't like about this deal is the 3rd-party "learning" software itself, which can get buggy sometimes. I can't always count on not having to start a 10-minute lesson over, just occasionally. Secondly, at the beginning and end of a these units software takes you through 5 clicks, as in "click here", now "click here", wait for an arrow, "wait 5 second" click it, "tap anywhere on the screen". Hey, you're a computer program, dammit! If you know what you need me to do, then YOU fucking do it! I thought computers were good for that repetitive stuff... I dunno...

I will stop the rant about the Artificial Stupidity to get to the different point of this post. The first "learning" unit I got to this time was a new one. It was some corporate mumbo-jumbo (wish I could remember the name, but it's thankfully not on my virtual to-do list anymore!) about workplace threats and that. I'm not really in their world on corporate crap, and once I started the unit up, I realized I am REALLY not in their world at all.

See, every one of the bad guys in this lesson on how to see bad deeds done (dirt cheap) in the workplace was a white guy. It wasn't just the one obligatory police-sketch-artist drawing of mustached mean-ass looking possibly white guy. There's plausible deniability there, as, well, he could be partly black, hard to tell, and maybe even one of those immigrant mass murderers - do Moslems wear hoodies? (Maybe they do up in Dearbornistan - gets damn chilly up there.) No, but there were color photos of white guys, ONLY, who I'm pretty sure work at the company and had their mean faces and gestures on and up for the lesson. First, I hope they are hourly employees and made a few bucks at it, but secondly, I thought we were a diverse workplace environment, dammit! I keep hearing and reading that. There was absolutely no diversity in this 45-minute lesson. This was not my diverse attacker. This was not my beautiful workplace. It's these same old pale males again. Same as it ever was!

Keep in mind as you read this that it wasn't as though I was paying great attention to this lesson in "run, hide, or fight". Haha, the one fight" slide (do we still call them "slides"?) I saw had a lady with her laptop raised over her head. I mean she was ready to fight. That was no modern thin-ass, chicklet-keyboard style unit. I mean, it could have been a 17 lb. Lenovo 610S, so watch the hell out, workplace violence perpetrators! That thing is bulletproof. I don't know what happened as the sound wouldn't work for the last 2/3 of the lesson.

No, but the thing is, I know bullshit when I load it up, and even before I saw all the bogus white security-alarm-commercial white men, I was ready to blow this thing off best I could. I was in luck with 2 things. This particular long lesson (45 minutes, as I wrote above) did not have slides that require the user to click "CONTINUE" buttons. I'd have been screwed, as I needed to take a dump and subsequently a shower. After that, it was time for breakfast while perusing Steve Sailer post comments. Also, it didn't have a long test at the end, or I'd have had to make 5 or 10 runs at it.

I got out of the shower, and the damn tablet screen was dark. What a waste of 20 minutes of my life that I'll never get back! (Maybe if I get attacked later and beat all hell out of the guy with this tablet, I'll be more than even, though ...) I had the sound way, way down so I could barely tell if it cut off, meaning I'm supposed to to something, and I guess it got sick of waiting for me to shave.

After starting it over, I kept the tablet close so I could monitor it and touch the screen once in a while to keep learning while I read Sailer comments on another device and ate my fruit and a few carbs. That's when I occasionally noticed the plethora of white male attackers and the other stupidity. I'm very glad it didn't ask me any hard questions, involving race, immigrant mass murder syndrome (True or False), and the like. I actually aced the thing, all 3 of the random questions that, luckily, didn't time out on me.

It was very nice, BTW, to get back to the regular lessons on actual physical semi-technical stuff that I really do need to know. What a relief!

I really don't appreciate being blatantly lied to, whether I get paid for it or not. There probably are some young and naive people who really go for the narrative that was contained in that long presentation. The corporate people put it out to cover their asses, but corporations are places of great virtual signaling now too. I noted on this unit that there was some mass murder incident at a Waffle House. (The sound was either way down or not working, so I just saw some brief wording.) Yes, you can find white guys doing these deeds and cherry pick those incidents. I suppose in the Waffle House attack, some people really did get scattered, smothered, and covered. There were no lies of commission, just lies of omission. Any kind of black, Hispanic, or immigrant mass murder event was just not to be mentioned.

I'll let VDare cover the Immigrant Mass Murder Syndrome more comprehensively than we have*, but how about that Fed-Ex flight 705 attack 26 years ago? Is the cockpit of a DC-10 not a workplace? I'd heard of that incident for 20 years before I found out that it was a disgruntled black pilot (he'd lied about his flight time so was in trouble) that tried to kill the pilots and flight engineer with hammers and a spear gun and crash the bird. He almost did too. However, after one big struggle involving severe aircraft maneuvers all 3 of the flight crewmembers survived but were hurt so seriously they could never fly commercially again.

There was no mention of Fed-Ex Flight 705 in this unit. I would have really liked to learn something from that. Alas, #StoryTooBlack

* It was in Canada, not America, but the reader may want to enjoy our post Immigrants doing the Cannibalization that Americans JUST WON'T DO.

Moderator
PS: Mr. Blanc, there's a LOT to be said for working on your own, away from any corporate environment. I've worked for places with as many as > 100,000 employees and about 10 other sizes down to 4 and then just me. Smaller is almost always better, if pay and job security are not your be-all-to-end-alls.

I'm of the opinion that when it comes down to it, it's the lawyers and bureaucrats who are a big contributing factor in these still-rare workplace shoot-ups. They have made it hard or impossible for employers to make common sense decisions about firing people. The HR ladies just make things worse - they are like the modern elementary school principles at the playground.
MBlanc46
PS One of the benefits of being a freelancer and working in the back bedroom is that the only threat of workplace violence is myself, and I’m rarely violent toward myself. I had enough time in the regular world of work, however, to understand how some guys—it is always guys, although not only white guys—finally just get fed up, snap, and shoot the place up. I’ve never been high enough up in the pecking order to be in the meals and entertainment brigade, but I did put in a couple of years as purchasing agent for a small construction company, and there were lunches or bottles of booze (no hookers or coke) from the vendors at Christmas time. This was forty years ago, and there was no idea that those gifts weren’t quite appropriate.
Moderator
PS: Mr. Alarmist, I was never in the enviable position to be offered hookers and blow. (I would have passed on the blow and doubled up on the hookers.).

I think we did have some videos or "learning units" a few times that involved expenses and what the client or we were allowed to pay for, etc. However, that is not the world I'm in, so they cut that one out this time, but subbed in this idiotic workplace aggression stuff. I wish I could remember the exact term they used, but it's gone, yea!

No, I think the hot babes are perfectly OK, as long as men don't in any way get excited or interested in them. Them's the rules of the workplace.

I wonder if these compliance/aggression video producers hire the same casting company that supplies actors for the burglar alarm commercials. The latter are what I did a search on first to find a good image for the post, but then I found this nice "guy with the rifle who mistakenly came in on a Sunday" image.
The Alarmist
PS:

This must have been produced by the same outfit that supplied online compliance training to my firm. All the bad guys were white ... no surprise there. The surprise was that they declared a poor older woman bookkeepers as an accomplice to the fraud even though the fact pattern said nothing about her involvement or awareness.

The funny part for me, which I flagged to the babe heading HR, was the page with three silhouettes, two of whom were male, and the third was a very shapely female in short skirt and spiked heels striking a surprisingly provocative pose. How did that get past.

The thing I had to flag to the head of compliance was a test case that I said was acceptable, but the trainers declared taking a gift of €25 was in violation of policy. I knew that to be BS because our Board had the original policy re-written to allow gifts to be commensurate with social station and environment, which worked to my advantage as well. As I pointed out to Compliance guy, €25 might be a meaningful amount for the back office clerical, but it is barely an appetiser for front-office types on a legitimate business lunch.

BTW, am I the only one in the world to notice the world economy has gone down the bowl since the compliance types started cracking down on M&E? Ah, I do miss the days of being offered hookers and blow. Now I guess I should be happy to be offered a sandwich.