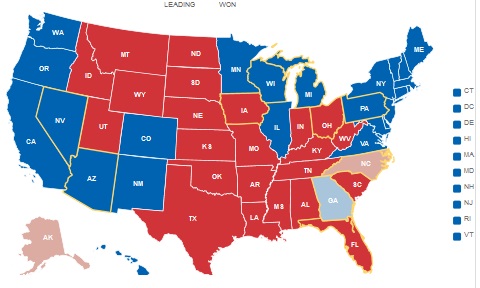 Not only the methods of cheating in the '20 election were myriad, but the various methods of determining that cheating was done are many too. I'll have to post on that later, at least linking to one web-page I've read that describes all the goings on. Pink to light blue, to red. That's the only way it ever seems to go. That's pretty curious.

They say it's over. I mean there's a map and all, on the Fox News site. The Associated Press declared Joe Biden, with his vice-slut Kamela the winner of this Presidential election.

They up and DECLARED it, like Michael Scott here:

(Please watch the whole The Office clip here, if you just want to laugh in general.)

Yeah? Since when does the Associated Press, or ANY media organization decide a national US election? The US Constitution says otherwise. I wish more Americans knew this. Other than the 2000 Florida brewhaha, the elections in my and maybe every single living Americans' lifetimes have been decided with enough votes in enough States to make the electoral vote count clear enough. We figured it the big news media wrapped it up, then it was a done deal. The cheating was never large enough, or at least blatant enough, to have made the difference. At least that's how it's looked, up till now.

This time the States with the very close results really need to stand up. I'm not saying they will, as States have given up their power to the Feds, sometimes voluntarily and sometimes involuntarily, steadily over the years. Likely most State legislators think deciding school closings and the state budget are their biggest powers. Nobody has the guts to stand up to anything Federal, but this time it's really the Big Media, kind of a branch of the Feral Gov't, that they'd be standing up to. That's also scary to them.

Trump can't do this alone.

Since the song may be in your head, here's Hank Williams:

Hank Williams wrote and recorded Your Cheatin' Heart in 1952. It was released in 1953, after he had died.

Mblanc46
PS Folks have been saying for some time that “we can’t vote our way out of this”. If there are any lessons to be learned from this election, it’s that we can’t vote our way out of this. While there might be tactical reasons for voting for this or that Repub, strategically, the Repubs are not our friends. They are as tightly tied into Globohomo as the Dems are, although with slightly different emphasis (more globo, less homo). We can no longer hope to change things from the top down. All of our actions should be directed toward building, from the ground up, structures and networks with which we can defend our communities from Leviathan.
Moderator
PS: I agree, Alarmist. I am near a State (I hate to get too specific) in which there may a good reason for a recount, re-do, whatever, and maybe I'll have a chance to get involved just the littlest bit, if possible.
The Alarmist
PS:

This can only be fixed in the State legislatures in December, but Repubes probably don’t have the stones to do it. You can bet your behind the Demonrats wouldn’t hesitate if the shoe was on the other foot.

People in PA, MI, GA, and NC need to make it perfectly clear to their Repube legislators that they will not get any votes for their re-election to the legislature if they let the Dem fraud go unchecked.