The topic of the book that I'm reviewing here is not particularly timely or relevant to any other stupidity going on, but I just read it, so I'll be danged if I won't write a short review on it.

A good thing about this review of David Goldman's book A Father's Love, written in '11, is that I'm not writing this one 2 months after reading it, or even a few YEARS later, as I've done. It's been just 2 days. I even have it on me, in case I need to look anything up, but this will be pretty general.

I think it was an unz.com commenter, as usual, who mentioned this nonfiction book about a 4 y/o boy's abduction by his mother and the father's (David Goldman's) great efforts to get him back. Just so you know, there's nothing to be "spoiled" by my mentioning the ending of the story. This is close to one of those feel-good books Okra or whoever's on daytime TV now might push, so we know the ending from the get-go. Even the book jacket mentions Mr. Goldman getting his son back.* Sean Goldman, 4 years old when he was kidnapped, in 2004, is now a young adult, and has been on TV with his Dad, talking about the subject of the type of crime he, and his father, were victims of.

OK, so this is not to be read for the suspense. It's supposed to make one feel good about Mr. Goldman's perseverance. There's no doubt about that, but really it's not a good read though. Because the author goes into so much detail on the legal and political struggle and shenanigans, which are enough to bring the blood pressure up 25 points, it's just a frustrating story, and I ended up skimming a bit to get to any happy parts. That takes a long while!

Without going into that much detail, let's get to the story. David Goldman, a model and fishing charter boat Captain, had a happy marriage to a Brazilian women named Bruno. They had met in Italy as he was doing his modeling work, he imported her to his nice part of New Jersey (near the shore, Bruce Springsteen territory), then got married in December of 1999, and they had a boy named Sean in May of 2000**. Here is one of the B&W photos in the insert section, this one being of the happy family, soon before the bad news: 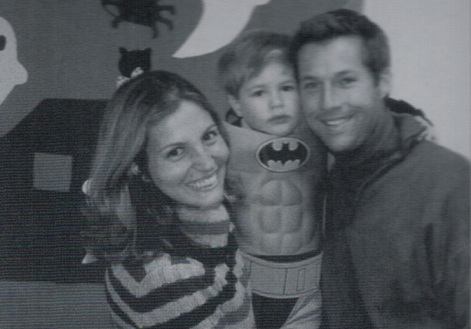 Yeah, well, upon one of the normal-seeming vacations out of Newark, NJ to Brazil (they traveled a lot), wife Bruna and her parents, who were rich Brazilians who spent time in both countries, decided they were simply going to stay in Brazil, with son Sean but not his Dad. This was no spur-of-the-moment decision, though, as Bruna and her parents, who were heavily involved, had this planned out. David was by far the last to know what was going on. He received a phone call that changed his life. (There, do I sound like Okra, or a Yahoo headline, yet?)

There was a rich and powerful Brazilian guy involved from early on in this break-up, or perhaps before (that's not clear). It turns out that her problem with her husband, best as he could ever determine it. was just that Mr. Goldman, part-time model, co-owner of a fishing charter operation, loving Dad, and provider of a nice house on a beautiful spread of land in a New Jersey Whitopia, was just not rich enough for her.

Does this sound familiar? It should, if you enjoy humor and have read Peak Stupidity's one (so far) embedded Telenovelas are Hell video***. Yeah, David was not rich enough for Bruna, but it was bigger than that. Her new man, one Joao Paulo Lins e Silva, was a rich and powerful Brazilian guy who I guess wanted the new complete instant family. This is where it gets downright funny for a bit. Mr. Goldman's ex-wife Bruna's brother is only mentioned in only one paragraph, on the page right after the one that got me thinking "hey, this is starting to sound like a freaking telenovela." I about LOLed when I read "Bruna's brother had attended the famous Lee Strasberg Theatre and Film Institute in New York and had made some minor appearances in Brazilian telenovelas". Haha, so THAT'S how it is in their family!

This was a hell of a thing for a father, as, though, at least David had been informed in that unexpected phone call, trying to even see his son was no easy matter, and it took years to even get to do that, much less bring him home. As I wrote earlier, much of the book is about the legal battles being fought against a powerful family in a country in which the rule-of-law is not set up for the little guy. There had already been the "Hague Convention" to try to help parents in this international parent abduction business, so that, and all sorts of law. lawyers, and legal battles are discussed. It's just too much, but Mr. Goldman wanted to tell the whole story.

Something like 60-odd kids had been kidnapped by Brazilian parents, and 3,000 or so throughout the world, with mostly the Moms as the kidnappers, as of the time of the book's being written. That's not really a big number at all in the scheme of things, but a terrible ordeal, over, in this case, 4-5 years, for any parent. Mr. Goldman is a tougher man than me, in being able to take the continual postponements, blocking of his lawyer's moves, and political and legal abuse, without having eventually beat the living shit out of some Brazilian lawyer or judge and spending the rest of his life in a hole there. That took real toughness and love for this boy.

One of the biggest things that helped out David Goldman in getting his son back is that Bruna died in childbirth down there in Brazil having Mr. e Silva's daughter. That was a big break in the case (that's the way I'd see it, after all that), as the only real parent was David Goldman. Still, this went on and on...

After so many efforts of Mr. Goldman and his lawyers, and Congressman, his case, as can be seen if one duckduckgo's it, became big news story finally. That didn't do it for a long time either, but even the big politicians got involved. (That explains the Hildabeast's being on the book jacket, and I'll give her one non-antiChrist vote for that one.) Any parent without all this help may never have gotten his child back.

Well, this one kind of went on a while, so I'll just bring up one more point. This book was mostly just about David Goldman's (eventual) high-profile case, and a little bit about other international cases. However, this stuff happens plenty within the US. I know personally of a guy whose wife absconded with his daughter with no word of whereabout or even who did the kidnapping for days and then months before he could even see his child. It is indeed better to deal within a legal system that is not quite so crooked, for now, but let me put it this way, as far as how things go here: Were it the guy I know who'd done that, he'd have been in jail for kidnapping for some years. He'd never, ever have custody of his daughter again, even if the ex-wife went off the deep end crazy. No, but for kidnappings by mothers, there is some kind of get-out-of-jail-retain-custody-anyway-for-free passes around.

Well, I read the book, I wrote the post, what more can I say, besides, this book is not that great entertainment. I'd only recommend it if you care about the political/legal angle, or maybe you are ready to import a foreign bride yourself. Be careful out there!

PS: Maybe there'll be a movie out someday. I'd go see that.

* Speaking of the jacket, it does, however, have a recommendation by one "Hilary Clinton, Secretary of State". That was quite troubling.

** Interestingly, the engagement date is given non-specifically as just "1999". I guess this could be called a shotgun wedding, but it didn't sound like either had to be poked in the back with the 12 guage.

*** It was only 11 days ago, but then we've been busy here. The clip we showed was of a Mexican telenovela, but there are Brazilian ones too. There will be more of those "Telenovelas are Hell" to come. As far as Latin American videos go, it's a tough call between hot bikini weather girl Flavia and the humorous takes on the telenovelas (Latin-style, extreme soap opera). Our friends down south are known for big tits and big drama. I've seen it myself.

Adam Smith
PS: Thanks for the reminder Mr. Moderator...

It's a good time to order garden supplies for next year...

Deer love red okra as much as I do...
Maybe this will help?

☮
Moderator
PS: I agree that your comment describes well what has slowly happened over a century. The feminism got serious 1/2 a century ago. Is that related to the state of things, with the washers/driers, refrigerators, ubiquitous autos, and so forth having gotten well established by then.

It's not like it's some big plan, I guess. The divorce laws are the most shameful.

You are right about the not-very-far-sighted men, too, Mr. Blanc. Some in the manosphere (I'm not really in this sphere, but I sympathize) call the "White Nights". They can see only just past the end of their, uhhh, lances.
Mblanc46
PS Hypergamy is a real thing, chaps. It destabilizes relationships, it destabilizes societies. Our ancestors, living much more on the margin than we do, sought social stability, so they created social structures that limited the consequences of hypergamy. They made divorce difficult and shameful. Once she married you, she was stuck with you. Of course, the opposite was true, as well. The fact that male labor was necessary for female survival reinforced those structures. But as society progressed technologically and organizationally, women got the idea that they could live without male labor. Or, at least, without the labor of an individual male to whom they were legally bound. They lobbied to loosen the regulations that prevented them from dumping an unwanted husband. And taking his kids (if desired) and a good chunk of his stuff. Many not-very-far-sighted men joined women in this lobbying. And things are only going to get worse as the Left gets a stranglehold on the federal government, and many state governments. Be very, very careful, gentlemen.