Bohemian Rhapsody - The Movie ... and the song 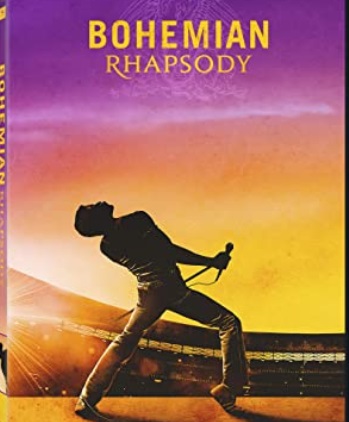 The movie makers, not very original these days, must have found out that making movies of the lives of 1970s artists is paydirt, as there have been s a slew of them out. Peak Stupidity reviewed Linda Ronstadt: The Sound of My Voice and also Rocketman about Elton John.

I want to compare the 2018 movie about the band Queen called Bohemian Rhapsody, which I saw recently, to the Elton John Rocketman movie. (The Linda Ronstadt one was more of a documentary.)

I'll state right here that the Queen movie is much better than the Elton John movie. The multiple flaws that I didn't appreciate in Rocketman were not a problem in Bohemian Rhapsody:

1) You want to hear some of the music, of course. In this movie, the songs did not make the movie into a musical, a genre that I never liked, with only a few movie exceptions. In this movie the songs were played either in the background, or with the actors doing a concert scene, or they were from music videos done at the time.

2) Unlike the Elton John movie, this Queen movie was not all gay, gay, gaiety. There was some gay kissing, but none of the gay sex that was in the Elton John movie. This was a big relief. I had thought that there must be some incentive for the studios to keep that in-your-face gay narrative going, by sticking it into (no pun intended) the movies with the great 1970s musical artists that many people want to see.

3) Bohemian Rhapsody did not present a story made to have us feeling sorry for the guy, in this case Freddie Mercury, Queen's flamboyant (and gay) lead singer. This was much better than in Rocketman, as Elton John's Dad's disapproval of his son was a big theme. Something similar iwas in this movie, but the Dad supported his son at the very end.

This movie still had some of that VH-1 "Behind the Music" feel to it. Mr. Mercury (and his band) got famous, then he lost himself or something, then he recovered his mojo by the time of the huge "Live Aid" concert at Wembley Stadium, just when he'd found out he had AIDS and was going to die young.

The actor who played lead singer Freddie Mercury sure looked weird, with his unusual arrangement of teeth and the long hair. The idea was to look like the artist, of course, who had extra incisor teeth, not his idea, I'm sure. In the movie, and I guess in real life, Freddie Mercury said that his bigger mouth due to these extra teeth made him a better singer. His real name was some not-easily-pronouncable Parsi name, and the actor looked much more foreign with the long hair than the real Freddie Mercury did. Once he got a haircut, it made all the difference. He looked more normal, while the rest of the band kept their long hair, not a bad idea, since at that time they had moved into the "hair band" era anyway.

Freddie Mercury got much of the attention in the movie as in real life. He did have an impressive voice. However, I maintain that the band Queen would have been nothing special at all if it hadn't been for the lead guitar playing of Brian May*. It may not have been just his playing (I'm not enough of a critic to compare him to Eric Clapton, Jeff Beck, or Jimmy Page), but more the sound out of those amplifiers and the special effects. It reminds me very much of the guitar sound out of Jeff Lynne of ELO (see Mr. Blue Sky, for an example). Whatever it was, on Killer Queen and then the song this movie was named after, those guitar solos are fantastic. The harmony from all the singers, to me best displayed in Fat-Bottomed Girls, was also a big part of their great sound.

I want to mention one scene to comment on a rock band phenomena that I've commented on before. The record company executive in one scene, or I guess that's who he was, had a meeting with the band, as the band had finished the groundbreaking A Night at the Opera album. As the executive noted that he really wanted more of the same formula that Killer Queen and other songs came from, the band stated the usual deal about wanting to be more creative, etc. No doubt, they had been very creative with this new album that had the operatic number that we may all know (damn well should!) Bohemian Rhapsody. It was great stuff, but from what I remember, whenever bands said they were tired of their "old formula", I ended up not being a fan anymore after another album or two. I could bring up many, such as Fleetwood Mac, with their Tusk album, after they had left their old (fantastic) formula behind. The Beach Boys did the same with creative genius Brian Wilson, but than, their latter stuff was not the same, but still good in its own way. Many other bands went downhill fast after this new creative phase started.

Back to Queen and that scene, a big argument ensued, not about the quality of the album itself, but just about which single should be released, Bohemian Rhapsody or You're my Best Friend, a great catchy song. The band insisted on the former, while this executive argued that 6-minute songs didn't get played on (at least AM) radio. It's hard to believe that what happened was the band quitting their big contract over this argument of which single to release. Could they not have released You're my Best Friend first, and then Bohemian Rhapsody after the album sold a bunch of copies?

I'd like to discuss one more detail about this famous song the movie was named after. The movie states at the end that Bohemian Rhapsody had a second run of success after Freddie Mercury died of AIDS in 1991. However, I've been under the impression that is was the famous scene in Wayne's World in which Mike Meyer and Dana Carvey blast the song out in their AMC Pacer, that gave the song new popularity, especially for many who didn't catch the song 1 1/2 decades earlier. I am pretty sure I'm right on this.

Enough about the music, though. I really enjoyed this movie, especialy because it didn't have the blatant in-your-face gay agenda that was in Rocketman.** The story of the band was told well. The band's best songs were in the movie and played right and in a timeline-consistent manner.

Peak Stupidity gives 2 thumbs up for Bohemian Rhapsody, the movie, and the song too:

* Brian May was a graduate Astronomy/Astrophysics student when the band got big. He had to decide between finishing his PhD or sticking with the band. I think he made the right decision, though I read a few years back that he went back and finished his work to get that PhD.

** I'm guessing that the other band members had some input into this movie. I really doubt they wanted this one to have a gay, gay, gaiety theme, as they were a normal bunch of family blokes.

Moderator
PS: That may be true, Dtbb. I was just going by the timeline of the movie, as I do remember when people were talking about this guy dying from AIDS, but I can't remember where I was during that Live Aid show.
Dtbb
PS:From what I've read, Freddy didn't discover he had AIDS til years after Livesid. I really enjoyed this movie but the timline was way outta whack.
Moderator
PS: Mr. Blanc, the problem with Elton John, or at least the music press at the time, is that they made his faggotry into the biggest thing about him. There was a time when nobody knew he was gay, but he was still a big success, writing and playing (with his great 4-man rock band) most of his best stuff.

It was just as with The Indigo Girls, 2 folk singer types from Athens who made some great music in ~ 1990. As soon as the lesbians all found out that the 2 were lesbians, the lesbianism became what the duet was about. That was annoying to someone who doesn't particularly want to be associated with that but just likes the music.

Ha, well thanks for giving it a whirl, as they say, anyway, Mr. Blanc.
MBlanc46
PS I was listening to that piece when Mme B called out from another room, “Is there some reason you’re listening to Queen? Not exactly your type of music”. She is so right.
MBlanc46
PS Having given up on pop music in the early 1970s, I’d never even heard of this Mercury fellow until he checked out not too long ago. One would have to be a hermit or dead to not have heard of Elton John, although I’m sorry that I have done. I don’t think I’d recognize any of his music. I’m not fond of flaming faggotry, which prejudices me against them. If they absolutely must do it, they should keep it to themselves. I do not want to know. Not a big fan of biopics, either. I do remember The Eddie Duchin Story, for some reason. In another area, there’s Fear Strikes Out, about Jimmy Piersall, a fine center-fielder and the best baseball broadcast color man ever. I’ll give the audio a listen.