The voyage of the Mayflower 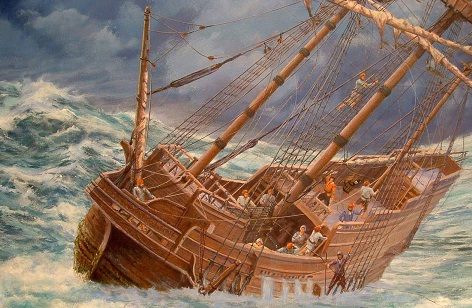 This is the way Peak Stupidity is, I'm afraid. We just cannot seem to keep up with important dates in history. The problem is, as discussed in our October post The Mayflower sets sail, also not written on the right date, is that the political correctness or "wokeness" is simply erasing our history. I mean, you'd have heard of this all over the place were TV and the internet around 100 years ago, on the the 300th anniversary.

Yes, it's been 400 years dammit! I don't watch the TV, but I haven't even seen a Yahoo headline in passing on the 400th anniversary of this voyage that was so important in American history.

The first sight of land off Cape Cod in present-day Massachusetts was November 9th of 1620, and we forgot that date. We'll make a remembrance today then, of the successful voyage. Here are a couple of maps of the rough route, the first a close-up of the departure portion. 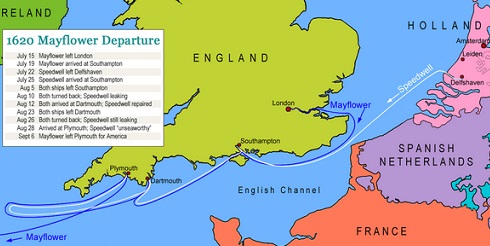 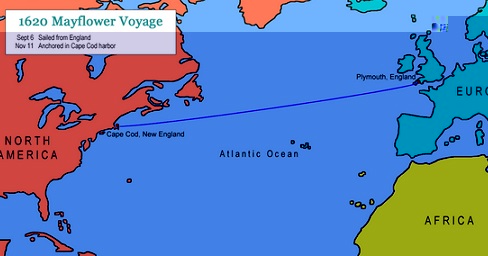 Because they voyage was delayed so long due to the problems with the 2nd ship, the Speedwell (discussed in that previous post), the voyage across the North Atlantic wasn't made in ideal weather conditions. There was one death along the way, but one child was born, named "Oceanus" en route.

By this date 400 years back, the brave group of Pilgrims was still on the ship, anchored off of Cape Cod. The famous Mayflower Compact was drawn up during this period. We'll try to remember that one in a few days.

I'm sure there were days over the last few weeks, 400 years back, when it felt like in the song.

OK, we're gonna repeat some music here. It's almost been 4 years, and we featured both the Beach Boys and Dwight Yoakam versions. Neither wrote this song, as it's an old traditional song. These versions are both excellent though.

OK, we can slow it down and make it country:

PS: I just talked to my elementary school kid about it. No, he hasn't studied anything about the Mayflower's voyage this year (only back in 1st grade). The school is too busy setting up plexiglass for 400 year-old important pieces of American history.
Moderator
PS: Mr. Blanc, no I didn't have November 9th or the sailing date or Plymouth Rock landing date in my head either. That's why I keep missing these things!

However, yeah, there are people who usually commemorate stuff, but I guess they got woke or someone woke them with extreme prejudice.
Moderator
PS: Mr. Smith, re your 2nd comment. I looked at all your pics and your one video.

a) I would say from my boy's description that your first pic link is accurate. There's no top, he said. Just sick anyway.

b) Haha, on the restaurant pic with the girl in the orange dress (the romantic one), one wonders whether these plexiglass cones matter anyway, as much as the young people stay on their phones so much. "Oh, I didn't catch what you said. Just text it to me."

c) Regarding the gym pictures, you've read my post on the bitchy lady 12ft. away, I guess. I see your efforts on the Ron Paul column. There's a guy there, pretty civil about it at least, going on about the virtues of the masks, and someone brought up the gyms or exercise in general. I feel the need to get back on that one. Ron Paul, in addition to Dwight Yoakam is a National Treasure.

d) Holy moley on those "Flaming Lips". Well, I don't know if Mr. Ganderson checked it out, but I will say, "hey, they've got 2 drummers, just like The Dead!" In reality, that scene is about as far away from that of a Dead show as one could get in this universe. (You may have to go to another universe even ...)
Moderator
PS: Mr. Smith, re your 1st comment, those are some damn good lyrics in that Dylan song. I'd never heard 115th Dream before.

Yeah, well "Sloop John B" was on the famous "Pet Sound" album, known as one of the most creative efforts (on the part of Bryan Wilson, that is) in pop music. It was compared to The Beatles' "Sargent Pepper" album. One would think it was a Beach Boys song, but nope.

Yes, Mr. Ganderson, Dwight Yoakam has always been a favorite of mine - I was up on his music back in the early 1990s. I will seek out that Yoakam version of "Truckin'" Thanks.
Ganderson
PS Dwight Yoakam is a national treasure. Ever heard his version of Truckin’? Smokin’!
MBlanc46
PS I do have the date 1620 in my memory, but NOV 09 not so much. I have pretty much abandoned traditional media—no longer read the paper, don’t attend to television or radio news—but I would have expected some notice of the anniversary to have gotten through to me. Our rulers are intent on erasing our history. Sad.
Adam Smith
PS: Why the toilet paper shortage but plenty of plastic?

Please tell me the skool is not doing this...

Or are they just programming children for a world of this...

I don't think the great reset is so great.
I want nothing to do with evil clown world.

I had no idea that Sloop John B was an old traditional West Indies folk song. I suppose I always assumed that Brian Wilson wrote it. Never really thought about it. Thanks.

My favorite song about the Mayflower...

"I asked the captain what his name was and how come he didn't drive a truck, He said his name was Columbus and I just said good luck..."