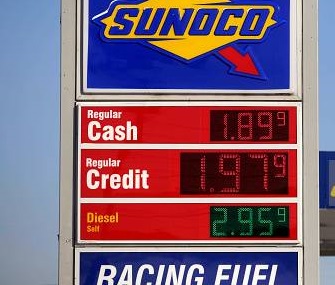 There's a trend in retail business going on right now that, as big-time noticers, the Peak Stupidity staff is right on top of. We noted a year ago, in the post What's the Frequency Price, Kenneth?!*, that credit card charges are being added on to prices on top of the original prices a lot nowadays. Retailers get charged a not-insignificant amount, 2% or something like that, for all these transactions.

Often the charge is a surprise to the customer (it shouldn't be that way), but with gasoline, it's clearly advertised. I've seen differences of from 5¢ to 10¢ per gallon. It's great that gas prices are so low**, but now the difference in price is significant, 6% or so (just got some gas at $1.79/G). Debit cards, or cards used as such, are often treated as cash at these stations, but other times the debit price is in limbo. If you've got to go inside to find out, you may as well pay cash while you're in there.

Right now, lest the reader thing this is another Curmudeonry post, to the contrary, I am pleased with this manner of pricing gas and other retail purchases.

Retailers have to pay for those fees somehow. It's the credit card customers who are causing the charges, so, IMO, damn right they ought to pay for them. The reader may want to peruse Peak Stupidity's case for cash being King, in Chipotle - no credit, no debit, and hold the E. Coli, Cash is King (Part 2), and Cash is King (Part 3).

This charging extra for credit card purchases, unless it is done in a hidden manner, is helping to encourage the use of cash by Americans. It is a hassle to go inside the gas station for a fill-up, since starting in the summer of '08, when gasoline prices peaked, almost all stations became pre-pay. (It's not that long ago, but people forget quickly. If you went back to early 2008, most gas stations outside the ghetto or NY City let you pump the gas and pay afterwards.) I filled up a vehicle at that awesome $1.79, OK $1.799 per gallon, and found out I couldn't get those 11.1 gallons into the tank. That required another trip in. So, what, is it not worth a small extra effort taking 2 minutes max (unless those damn Lotto Players are in there scratching up a shit-storm!) to support cash purchases.

OK, let me explain why it is very important. This book about China I am 2/3 way through with, We Will Be Harmonized, is scaring the living out of me. It looks like the review will be a multi-part one. It will scare the living out of the average Peak Stupidity reader too, I'm guessing. The almost total elimination of the use of cash that has happened in just the last few years (I mean like 3!) is not the only Orwellian stupidity the book discussed, but it's a big part of it. Americans need to make really sure it doesn't happen here.

I've had airport vendors lately tell me I need to pay with a card. Reason # 1, after "out of change"?: COVID-one-niner! Sure that's the ticket. COVID-19, what CAN'T it do (to take away freedom that is)? I see this being pushed over here too, but only to a small degree so far.

You got extra credit card fees for the customer? Go ahead, charge the credit card customers out the ying-yang! Piss them off, hell, maybe even me some days. I'll get over it. I like this trend. What's good for cash is good for America.


* That post involved more than simple CC charges after the price was given. There was also a service fee that was told to me afterward, that added to the price quoted on the phone.

** In real dollars, they are as low as they've been in our readers' lifetimes.

@Mr. Moderator ... You got an allowance? You lucky bas****. I had to get a job ... actually a few. Back in those days I got an hour of flight time for each aircraft I washed at the Cessna Flight Center ... it’s not as easy as you might think to get smashed insects off a plane, even a slow one. My car at the time was a Pontiac something with a V-8, the most memorable thing about it being that you could almost see the fuel gauge dropping when you stepped on the gas pedal. Credit cards were a long way off in my future. I was like one of those ‘70s kids you showed in another post. Despite inflation and Carter and the Oil “Crisis,” those were better times to be a teen than today.
MBlanc46
PS Adam Smith: Mme B and I use charge cards, but pay them off every month. It’s no different than running a tab at the bar or having an account at the local grocer. It’s less credit, more convenience for all concerned. Those who do run up a balance, do pay extra: interest. If a merchant wishes to charge me for the convenience, I’ll either look for another merchant or forego the convenience.
MBlanc46
PS When I first started using credit cards, in the early 1970s, a lot of gas stations charged more per gallon if you used a card. I sought stations that didn’t. Standard (or maybe it was already Amoco) didn’t, so I traded at Standard. In the 1980s, they wanted you to pay at the pump, and the extra charge disappeared. I first noticed its return in southeastern Michigan six or eight years ago. I’ve now seen it in the Chicago area. I like the convenience of paying with a cc at the pump, but if they insist on making me pay for the privilege, I’ll insist on their providing a cashier to take my cash. Bill H: The cheapest that I remember was about $.25 per gallon, but that was well before I started driving. I do remember gas wars at the corner of Main and Ogden when the price got down to $.05. If you filled up at the Bulko on Sunday morning, you got a free Sunday paper. And, of course, dishes, etc. I believe that Mme B’s silverware came from a gas station. Don’t let anyone tell you that those weren’t the good old days.
Moderator
PS: Mr. G, I remember when my weekly allowance was only enough to buy 1.5 G, let me put it that way (without pinning down the year, as is my way here). Oh, and my parents left the car with well under 1/4 of a tank most of the time, as they really didn't have a lot of money, but perhaps that was about keeping us from joyriding. Clever!

During that period of under $1/G, I had a car that was pretty new to me, so I didn't know where empty really was. I found out twice in one day. See the first time, even without the power steering/power brakes, I was able to maneuver into a gas station since I was on a downgrade. However, they wanted $1.25 a gallon. I was not happy with that, so I bought 1 dollar's worth, went to work and then lunch (couldn't have been more than 6-8 miles though), and ran out again on the way home. It's not that the milage was that bad, but the car cut off on an uphill - fuel starvation rather than complete fuel exhaustion.

The 2nd time was when I had to take a walk.
Ganderson
PS I remember being stunned when it went over $.50, and then during the second oil shock in the late 70s when it first reached $1.00. The first crisis, except for the price, wasn’t that awful where I lived- don’t remember gas lines, etc. My wife, who grew up in Jersey tells a different tale.

I seem to recall the nominal price at the pump dipping under $1.00 in the late 90s.
Moderator
PS: Mr. Ganderson, you must have started driving just before the 1st "oil crisis". It had to be a bummer when it shot up to double or more.

That is a weird court ruling, Bill. It's the same thing, practically speaking.

I couldn't agree more, Mr. Smith. Yes, I had that one post about taking a road trip during the early-stage Kung Flu PanicFest. I also had a post about inflation and I gave numbers that show the same 2 1964 dimes that could buy a gallon of gas around the time Bill H. started driving could buy a gallon today (assuming the cashier knew the value of real money, hahahaa).

Now, at $1.69/G in some places I've seen, but an oz of silver taking over 24 of those piece of green paper to buy, and 0.073 (if I remember right) troy oz of silver in a silver dime, ONE silver dime could buy a gallon of gas!

One more thing - for gold I guess a couple of instances of inflation in that form of real money were the time the Spaniards got the native Central/South Americans' gold and then later the California gold rush period.

Credit drives prices up because it devalues the currency.

Artificially low interest rates reward borrowers at the expense of savers and workers.

It is only right that people who use credit pay more for the things we should all be buying with cash*.

Mr. Ganderson, when I started driving gas was about a buck a gallon (1994). Today gas costs about half of what you and I paid when we started driving. As Mr. Moderator said, we enjoy the lowest gas prices in real dollars in our lives. I recall a post here not too long ago about how it's a good time for a roadtrip because gas is cheaper than ever.

*Too bad Americans do not use money instead of currency. Unfortunately much of the world has embraced the cashless society nightmare.

**In 1859, the Comstock Lode was discovered in Nevada and the US silver supply increased significantly within just a few years. Although the increasing amount of silver did not have an immediate impact, it eventually led to oversupply and debasing of the silver price during the 1870s.

☮
Bill H
PS Gas was in the $.20/gal range when I started driving and they gave you a coffee cup, or sometimes you could collect a set of dishes.

There was a time when merchants signed an agreement with credit card processors that included a stipulation that they could not charge extra for customers using a credit card. Merchants began offering a discount for cash when processor fees got too high. Courts ultimately decided that a discount for cash was NOT the same as charging extra for using a card. Weird.
Ganderson
PS Gas was about .35 / gallon when I started driving in 1973. It’s probably cheaper now.
Ganderson
PS. Sweden is very far down the road to a cashless society.