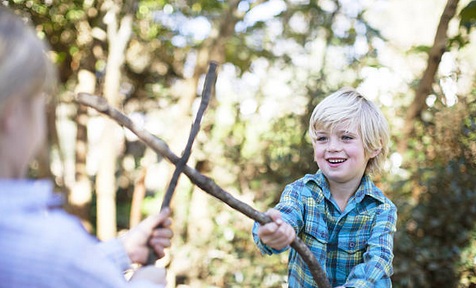 This is a sequel to Escape from Stupidity. There are no Steve McQueen motorcycle chase scenes, just kids playing with big sticks.

After a fairly friendly run-in with the School Resource Officer, aka, cop, last week, we also had another pleasant experience at the park. No, that alone does not make a Peak Stupidity post. It's just that this time, we got even more out of the era of hysteria, if only temporarily, as the 4 kids grabbed some 8-10 ft. long sticks* and had sword fights for half an hour!

It was my boy, 2 kids a bit younger, and a girl from his class who amazingly likes to play with the boys. What was so enjoyable to me was that there were no freaked-out Moms and no scolding. The Mom of one of the boys was gone, entrusting me with her boy, and then the Dad of the two other kids was raking leaves across the street at their house (great location!).

Face masks were the least of anyone's worries. Yeah, one boy got hit in the face, but he told me quickly "I'm alright", as if afraid I was about to tell them to stop. I do believe the school Principal would have had a early-onset heart attack were this happening during recess. She doesn't even allow balls, so that the kids end up throwing shoes at each other!

OK, I've got my safe space now from the Kung Flu stupidity. Thank you all for reading the blog. Posts are lined up for next week.


* They were pieces of some shrubbery that had gotten out of hand, I guess, but with the leaves and other branches stripped off.

Moderator
PS. "Dunno why my handle changed- auto non complete?" Is that something I'm supposed to take care of on my end, with some setting? Cause, I sure haven't, haha.

Fixed up the dupe and the handle. Sorry.
ganderson
PS. Dunno why my handle changed- auto non complete?
ganderson
PS We rarely had snow days in 1960's Minnesota- I remember school being cancelled once when it was -30, but for snow? Nah!

In grade school we used to play tackle tag on the playground when it snowed- it was against the rules, but I never saw any teacher try to stop it.

After a brisk tackle tag contest, our blue "tweederoy" slacks would make an awful racket- they "swooshed" when dry, think Costanza in that episode where he buys the suit, but made a heck of a racket and had a peculiar smell when wet. The nuns pretended not to notice.
Laughter Is Good
PS Local schools realized the folly of raising a generation of soft weak snowflakes unable to cope with reality.
Sticks and stones may break my bones and will you jump off the bridge if all the other children do it were sayings from my youth in the old America.
Local teachers started warning me about the CPUSA takeover in the fifth grade and how I will always love them especially the hot blonde green eyed dreamboat Mrs. M!
Calling the police about cold french fries or some mean mug face pollution that hurt your fweewings makes our external enemies laugh out loud.
Don't give up because preezy of the steezy Stacy Abrams will lead us to Wakanda.
Forward! Yes we can.
Moderator
PS: Cloudbuster, it's fun to watch that. What's the principal going to rule next, no shoes? That'd be quite the dilemma, and the kids would love it anyway. We are kind of warm-blooded in my family, but some of those skinny girls (they grow tall but gain no weight at that age) and the boys too will be running around in shorts and no jacket at 50 and even 45 F all the time.

Mr. Ganderson, yes, i was thinking of just that. I'd never seen a video of the band that young before. I just added the video last minute. What about that guy rowing in the background? I wonder if that's his 15, no, 3 minutes of fame. Sounds like a great show. You were in the right place in the right era!
Ganderson
PS Were The Who the most “English-looking” band ever?

Saw them live at the Minneapolis Auditorium, I believe in the summer of 1970. Great show, they did the entirety of “Tommy”. Really loud, the loudest concert I ever saw. (Heard?)

Cloudbuster
PS "She doesn't even allow balls, so that the kids end up throwing shoes at each other!"

Kids are great at making up games. My daughter's middle school did allow balls, but nonetheless a bunch of the kids made up a game that involved chasing each other around, tackling each other and stealing their shoes. Completely against all the rules, but they got away with it most of the time. Either inattentiveness or sympathy on the part of the teachers. Whatever works.
Moderator
PS: To Mr. Alarmist, sorry, but I left out a word. I was referring to those "In this house we believe ..." SIGNS. I forgot to write "signs". In case they aren't around in England, these are virtual-signaling thankfully-small yard signs. They are about tolerance and "everyone is welcome", but ... don't think you can just bust in the front door and say "hey, I like your sign. Can I stay for a few days till I get my feet on the ground in your nice leafy neighborhood?"
Moderator
PS: Mr. Blanc, that was pretty much what I wrote about in my post called "School Daze" a week ago Friday. We didn't have nearly as many kids as yours, by a long shot, but it was the same story. I think some kid OD'd one time, and the cops came, and maybe one or two other times over the whole time I went to school there.

Besides the custodians, there was no one there who didn't teach class other then just the principal. The school was very highly majority white, very highly.
Mblanc46
PS “School resource officer”? Okay, I do know what it means. But it’s a recent innovation. I went to a high school with about 2,000 kids. It was the postwar baby boom. They’d just added a new wing (the “new building”), but it still wasn’t quite large enough, so they built a temporary structure with two classrooms (Portable Classroom 1 and Portable Classroom 2) out by the main entrance. I suppose that it’s possible that a cop might have set foot on the campus during my four years, but I don’t recall any such incident. The principal, Clarence Johnson, who was principal when my father went there, was more formidable than any cop. Of course, there were only a couple of blacks in the student body. That we need cops in schools is all the evidence that you need that we need a revolution. Or perhaps a Great Reaction.
Moderator
PS: If you chalk up the "In this house we believe..." to social conformity, yeah, it's pretty sane, Alarmist. The people are sane as individuals or in families, but they can get insane as a group.

(When you see every single parent picking up children at the school wearing non-mandated-outside face masks, you tend to note this insanity.)
The Alarmist
PS

No SWAT team showed up? You must live in a reasonably sane neighbourhood.