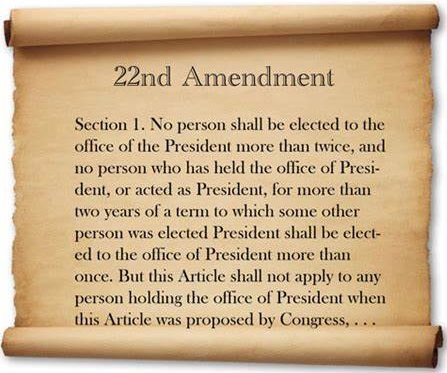 It's been a month exactly since Peak Stupidity's last morning Constitutional, and let me tell you, the Doc's not happy with that at all! Here's Amendment XXII:

This article shall be inoperative unless it shall have been ratified as an amendment to the Constitution by the legislatures of three-fourths of the several States within seven years from the date of its submission to the States by the Congress.

Amendment XXII is the only Amendment to the US Constitution that looks like it was created on behalf of one man. It was neither created to help this man nor to punish him, as in a retroactive Bill of Attainder. No, the 22nd Amendment was made because one President, the Socialist Franklin Delano Roosevelt was not satisfied with "serving" as head of the Executive Branch for only 2 terms (8 years), but well after the fact.

Those of us who got some real non-SJW schooling back in the day know that one thing Americans can be really proud of is the decision of President George Washington, our 1st one, to not run for office for a 3rd term. As the General who had won the War of Independence for the colonists just a generation before, he had the popularity to keep on going, like an elected monarch. By stepping away from office, Mr. Washington showed the new nation what its new government was all about.

I'll write a post on this, as it's half-way written in my head already, but back in President Washington's time, the office really was a position to serve in. After all, these yeoman farmers had lots going on at home, and to move away from the homestead for years, without a King Air or "Essential" Air Service, he'd have had much to worry about and he'd have been leaving his normal life entirely behind. The office didn't involve running an empire back then, so the power trip was not likely the same.

From our sometimes-biased but trusty Constitution Center interpretation page:

Surprisingly, many of the Framers—including Hamilton and Madison—supported a lifetime appointment for presidents selected by Congress and not elected by the people. That would have made the presidency what Virginia’s George Mason called an “elective monarchy,” however, and when this was put to a vote it failed by only six votes to four.

This time, the writers really don't have a whole lot to say about this Amendment. This one could be called just "housekeeping" language, but it's a little more than that.

There were no term limits for any office written into the US Constitution. The idea was truly that those in office were public servants and wouldn't want or need to stay for decades It was simply a convention, not any law, that the the US President would stay in office 2 terms max., until FDR came along. Franklin Roosevelt, a big piece of the New York power structure, was first elected President in 1932*, beating out Republican incumbent Herbert Hoover by 54.5% to 39.5% of the popular votes (472 to 59 EVs).

FDR won another landslide victory over R-Al Landon, with 61% to 31.5% (523 to 8 EVs) in 1936, because, the guy was supposedly getting us out of the Great Depression that whole decade**. We had to keep all that going, I guess. Then, by next Presidential election, in 1940, war was not necessarily imminent, but there were plenty of people who wanted it to be. (I'll leave that part of history to guys like Pat Buchanan and Ron Unz.) Roosevelt won an unprecedented 3rd term in 1940 election by 55% to 45% (I've been rounding to the nearest 1/2%) (449 to 82 EVs). Americans just had to "stay the course" or something. I'm guessing that's the kind of thing they were told.

Of course, by November of 1944, the Commander in Chief had us winning the war in Europe, with still a 6 month stretch of battles to go, and the war in the Pacific was on-going. You can't ditch the guy then, right? I don't agree, of course - the guy's not a General - those guys will still be doing the same job either way. After all, now with wars running for near 20 years, we switch Presidents multiple times, and just continue the "spreading of Democracy".***

Anyway, in 1944, the Presidential election was actually a slight bit closer of a race, with Roosevelt defeating R-Thomas Dewey by 53.5% to 46% (432 to 99 EVs). Look at this Wiki page for lots more detail on all of these.

That's the history, and one can see why some in the Congress and the public (of whom the majority of still voted for the guy for term4!) had had enough. What surprised me just now in looking at the dates, is that this Amendment was not even passed until March of 1947 and not ratified until February of 1951. The action in Congress was during President Harry Trumans' first term, and the ratification was in the middle of his 2nd term. One can see by the 2nd clause, looking like it's directed to help FDR, was written to help Harry Truman instead, who wanted another term that would have gotten him 11 and three-quarters years in office, had he not been beaten in the 1952 early primary in New Hampshire and promptly bailed out. (Of course, he'd have probably lost against Ike anyway - Ike beat D-Adlai Stevenson by 55% to 44% (442 to 89 EVs)). Hey, they tried for you with clause 2 of Section I, Harry, now go home.

It seems that the Congressional voters for the bill, the State legislators that voted for ratification, the writers of the interpretation page, and we at Peak Stupidity are/were all in agreement that Amendment XXII was a good one. That's what, only about 2 now, and really, Amendment XXI was nothing but a repeal of another real dud.

I guess those "public servants" in Congress and the State legislators are more civil than your current era bloggers, such as yours truly. Were I on any of these committees, I would have added a Section 3:

And fuck you, FDR, you Socialist asshole!

PS: That Section 2 of this Amendment is the same language as in 3 others: Amendments XVIII, XX, and XXI all had this language, as did the aborted ERA (hence the abortion of it). That's a good idea for the modern age, when politics is just all pervasive and goes on and on ... They all have the same 7-year limit, as, if we can't decide by then, maybe it's not some brilliant idea after all.

* As a Democrat candidate VP, Roosevelt lost the Election of 1920 to Peak Stupidity's favorite, Mr. Calvin Coolidge. who was the VP running mate of Warren G. Harding. Damn I wish I could have been there nearly a century ago, pulling the lever for my man Silent Cal back in '24!

** It just got worse in 1937 again. I will add, to be fair, that some say that if President Roosevelt hadn't implemented some of the Socialist policies, the US may have had a real time preventing Communists from taking over. I dunno...

*** Think about this: There have been 3 Presidents as Commander-in-Chiefs of the (undeclared) war in Afghanistan, 2 of them for 2 terms!

Ganderson
PS one of my favorite Mencken quotes, re Silent Cal:

In what manner he would have performed himself if the holy angels had shoved the Depression forward a couple of years - this we can only guess, and one man's hazard is as good as another's. My own is that he would have responded to bad times precisely as he responded to good ones - that is, by pulling down the blinds, stretching his legs upon his desk, and snoozing away the lazy afternoons.... He slept more than any other President, whether by day or by night. Nero fiddled, but Coolidge only snored.... Counting out Harding as a cipher only, Dr. Coolidge was preceded by one World Saver and followed by two more. What enlightened American, having to choose between any of them and another Coolidge, would hesitate for an instant? There were no thrills while he reigned, but neither were there any headaches. He had no ideas, and he was not a nuisance.
American Mercury, April 1933.

“He was not a nuisance” I want that on my gravestone.

When one reads the heavily censored history, one cannot help but come away from thinking that FDR was not a socialist, rather he was a hard-core Communist looking for the most expedient while operating within its Constutional order to subvert the US Constitution. He seems to show at many junctures that he was a fan-boy of Stalin, and it is well established that his administration featured a number of Communist sympathisers in high and sensitive positions.
Moderator
PS: Thank you Mr. Blanc, both for the comment and the correction. I will fix it now. Sorry people.
MBlanc46
PS I’m inclined to the view that we have term limits: They’re called elections. Granted, a lot of time time, the electorate elect numbskulls or crooks, but that’s just the nature of folks. What real difference does it make whether one numbskull or crook serves for sixteen years or four numbskulls or crooks serve four years each? What we really need are limits to what government can do. Of course, that’s what the Constitution tries to do. But, the Constitution contains some gaps you could drive a truck through. And, when the folks in government ignore the limits on what they can do, there’s not much that can be done about it, other than watering the tree of liberty with the blood of patriots. That’s the stage we’re at, as far as I can see, but I don’t see much happening on that front, and I don’t really expect much to happen on that front. Re the 1920 election, the winner was Warren Harding, and, if I recall correctly, FDR was running for VP. I’m too lazy to look it up, and, anyway, I have to get back to work.