We at Peak Stupidity don't do too many of these R.i.P. posts, unless it's the occasional Rot In Place for the passing of such scum as Juan McAnmesty. There are 10's of thousands of good people in America that die each and every day. What does some actor of musician mean in comparison?

It takes a lot of toughness to remain one of the two famous black Libertarian pundits in the country, though. Walter Williams is worth an R.I.P. to us. 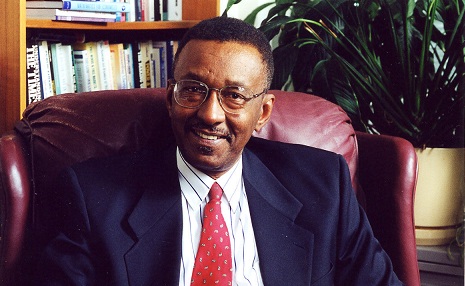 I haven't kept up since the www has been the time-suck of all time-sucks for me, but I used to read Dr. Williams' columns in the newspaper way back. It's possible that his stuff was in the alternative newspaper, the one with the crime stories and News of the Weird column, as Irecollect something like that, and it'd make sense. Hard-core Constitutionalist Libertarianism was not something a respectable newspaper would print regularly, even 30 years ago.

Economist Dr. Thomas Sowell, whom we mentioned four years back, when he retired, is the only other black Libertarian pundit that I know about. There can't be many. (It's too bad I needed the Race/Genetics topic key on this one.) How many black people in general are Libertarians? It can't be more than a % or two. Even if poll questions, as appear very often in unz.com's Audacious Epigone's blog, show a 5% black bar* for "I think government is too big", that's not the reality in the black community. As a whole, and consistently, the black community wants MORE FREE STUFF. Libertarianism doesn't bring home the bacon for them. The State does.

One could search the world over for a hint of a Libertarian style government in a black country. Nada. Is it genetic or cultural? What would we hear from the black leaders if all of them had been students of Walter Williams or Thomas Sowell. As usual, it's some of each. Don't feel bad, black readers, if any. China, full of high-IQ people, we are told, has nary a Libertarian streak anywhere in its 3,500 year history. (See Citizenship in the Nation.)

One thing that even non-Liberty-loving white people appreciated about Walter Williams is that he didn't blame them for the problems of blacks. That's a novel thing, it seems, as discussed in VDare's memoriam of Dr. Williams.

I should have been following Dr. Williams until the day he died. From his site (linked to above) here is just his last "Wisdom of the Month" blurb:

Wisdom of the Month

“No one can read our Constitution without concluding that the people who wrote it wanted their government severely limited; the words “no” and “not” employed in restraint of governmental power occur 24 times in the first seven articles of the Constitution and 22 more times in the Bill of Rights. – Richard M. Ebeling, “The Real Meaning of Thanksgiving” November 2016

“Congress has not unlimited powers to provide for the general welfare, but only those specifically enumerated.” – Thomas Jefferson

I made an effort to shake hands with (and get a free book from) another great Libertarian pundit one time - see "Papiere bitte!" - "Your papers, please!" and memories of Mr. Vin Suprynowicz.** I wish I'd done the same with Walter E. Williams, another great American.

* By not being a graphical-cuck and using appropriate colors, Audacious Epigone makes things easy on the reader of his graphs. One doesn't have to keep looking back and forth to the legend in his pie charts. Not only that, other graph makers will not be consistent anyway, as light blue may be "white people" one time and burnt orange the next.

Rex Little
PS I used to listen to Larry Elder when he had a radio show. I don't think he was a pure libertarian, but then I don't think Williams was or Sowell is, either. All three of them are/were close enough to suit me.
Moderator
PS: Mr. Anon, I was going to mention Larry Elder (then clean forgot), but as a possible Libertarian, as I wasn't sure. I do know he is a social conservative talk radio host in LA(?) who also doesn't blame black people's problems on the white man. You gotta appreciate that.
Mr. Anon
PS RIP indeed. I'm not a libertarian, and tend to find really extreme libertarians a bit off-putting. I don't know how libertarian Mr. Williams was, but I do know that on matters of liberty and limited government he always sounded very reasonable to me.

About 20 years ago, Thomas Sowell, already then in semi-retirement, had scaled his newspaper columns down to a list of passing thoughts - today we'd call them tweets. What was remarkable about them is that even though just a couple of sentences, they contained more wisdom and wit than most full length columns by other op-ed writers.

On the subject of black libertarians, Larry Elder used to be a libertarian, although he seems to identify more with the GOP today. He's an occasional commenter on FOX. They usually bring him on to talk about racial issues, which is actually pretty condescending. He's a smart guy and has interesting opinions on a variety of subjects. I don't know why they don't have him on to talk about other things as well. He's better than a lot of their regular talking heads.
Moderator
PS: Mr. Newman II, these guys were real economists in a "science" full of bullshitters. I didn't know Walter Williams had hosted Rush, but I didn't listen to Rush very much. Thanks for the comment.
Alfred E Newman
PS He guest hosted Rush Limbaugh many times.
An economist up there with F.A. Hayek in the common sense department.
It takes guts to go against the zombie sheep herd and these are the only people who improve the world.
Sowell has a great quote about college being nothing more than expensive isolation from reality.