We Have Been Harmonized - book review - Part 2

After the 1st part of this Peak Stupidity book review of We Have Been Harmonized was basically was a verbal thrashing of author Kai Strittmatter*, we'll get on into the interesting and important material of this book about modern China now.

The first two chapters of this book, entitled New China, New World and The Word are introductory material. Anyone who hasn't been asleep for the last 20 years knows about the tremendous rise of China economically. We can hope not, but I would bet along with most others who are aware of what China is about that whatever happens in China in the near term will influence the future of the world.

Before I go on to the meat of the book, I just noticed again Mr. Strittmatter's stupidity regarding President Trump at the beginning of that 2nd chapter. He was starting out writing about autocratic societies, such as modern China is unfortunately turning out to still be:

Anyone who has lived under emerging dictatorships -- in Turkey, Russia, or China, for instance -- will be only too familiar with deliberate, sytematic, and shameless perversion of facts. Donald Trump shows how you can apply that technique successfully in Western democracies if you are unscrupulous enough. His method is taken straight from the autocrat's handbook, in which lies are first and foremost an instrument of power. Fake News? Alternative Facts?

We WISH President Trump was an autocrat for a while! We'd have had a 1,900 mile-long border wall, the end of (partly Chinese) anchor-baby citizenship, legal immigration limits written into LAW, wars ended in all kinds of places, and so on, if that was the case. "Fake News"? Yeah, possibly Mr. Strittmatter should be wary of the Communists at the NY Times as much as he does of those in China. This was just the first of the author's silly TDS ranting, but let's move on ...

The first part, per my independent review and, as it turned out afterwords, the author's, is about the rule of the Chinese Communist Party. Peak Stupidity, from experience, can tell you that China is not ECONOMICALLY Communist. They learned from the 30 hard years under the butcher Chairman Mao that the economics of Communism don't work. I suppose they could have observed the USSR before their attempt, but you just don't go telling Chairman Mao what he doesn't want to know.

This doesn't mean that the country is not autocratic though. It didn't have to go this way. The author maintains that the opening up of China politically under Chairman Deng hit a high point before the Tiananmen Square massacre of June 1989**. There was plenty of more hope for a different, non-autocratic China after that time too. Peak Stupidity had high hopes for the place not that awful long ago, even 3 years ago - the reader may want to check out our 2 posts Dashed high hopes for China, along with Part 2 for more. Mr. Strittmatter pins the slide into a new Totalitarian regime mostly on the rise of the Chinese Communist Party leader Xi Jingping.


You have lots of freedom in China - just don't call this guy Winnie the Pooh! 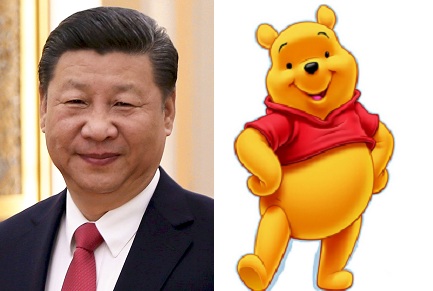 There IS a striking resemblance though. No, no no, I LUV, LUV, LUV the new Chinese President for life, just sayin' ...

Mr. Xi, a CCP apparatchik from the get-go and the son of a "revolutionary" friend of Mao and Deng, Xi Zhongxun, claimed to be a son of the soil. He'd been sent to the Loess Plateau in Shaanxi Province to be one with the people and tell them how to do shit better. Like many American politicians too, it helped the guy in politics to claim to be a man of the people. He became President of the country in 2013 and is head of the CCP.

One thing that I didn't understand before, and that this section of the book drilled home, is that the Chinese Communist Party RUNS the central government. Originating just under a century ago, in 1921, the CCP had its heyday during the Mao period. It kept a lower profile as things opened up after Chairman Deng took over. Kai Strittmatter says that the CCP is now running the place in a more Mao-era style.

It helped the CCP out a lot that President Xi had the Chinese "constitution" changed, with a YES vote from 99.79% of the National Party Congress, to make him President for life. ("Constitution" is in quotes, because anything that can be changed that easily is no constitution at all!) This first big section of We Have Been Harmonized is full of anecdotes, some personal of the author, about the increases in censorship, control of the CCP narrative, including revision of history, and clamping down on dissent. Things have changed much for the worse in the time Mr. Xi has been in power. This is even since your blogger has been to the country 3 years back, though I can't say I could follow much of what was going on politically.

I have an acquaintance who is a member of the CCP, in fact. No, don't worry, she is in China! She's one of those outer, orbit-of-Neptune-outer, party members who joined because in a State-owned company, one can't get raises or get promoted easily without being a member. One thing that members do is toe the Party line, more than your average Chinaman (yes, or woman) must. How far this will go as this President Xi goes full Mao is anyone's guess.

Modern-day China seems nothing like the place was in the Mao era, as, again, economically, China is not run as under Communism. Mr. Xi and the CCP are in good graces with the Chinese people because they've never had it so good materially. If you have a problem with the policies of President Xi, though, it's getting less and less likely you'll be able to speak out about it, much less do something that's not suicidal.

The author even discussed a President Xi "app" that is one of the most downloaded in China. The more speeches or writings of Xi that the user listens to or reads, the more points he gets. It wasn't said what these point earn the loyal Xi-app reader. Perhaps it's some General Tso's chicken. Oh, the app is spyware, BTW, sending back info on what the user has on his piece of iEspionage phone.

The more I read of this first section of the book, the more I wonder if Xi Jingping could be a candidate for AntiChrist. As Peak Stupidity noted in China roves Big Blother rong time, Revelation 12:3 says:

And there appeared another wonder in heaven; and behold a great red dragon, having seven heads and ten horns, and seven crowns upon his heads.

"Red" and "dragons" are Chinese colors and symbols, respectively. So what, the guy looks like lovable Winnie the Pooh? We don't expect the AntiChrist to come out and tell us who he is.

If President of China/CCP Chairman Xi is the AntiChrist, with powers (as to be described in our review of more of this book) that the old-time Red Chinese couldn't dream of, than perhaps Mao Zedong was just his anti-John-the-Baptist. After the sick miserable horror that was the era of Chairman Mao, we should probably dread what's coming. What used to be called the Mandate from Heaven may turn out to be a Mandate from Hell with this guy.

Sure, you say, but as long as they just do their thing over there, such as was unknown deepest yellowest China in the 1960s, I don't care. Well, that's part 3 of the book, with a review coming soon ...


* Rightfully, of course, as this guy is a Globalist, feminist, Kung Flu Panicker with a bad case of Trump Derangement Syndrome.

MBlanc46
PS Rosenberg’s Rule: Everything always gets worse.
Moderator
PS: I couldn't agree more, Mr. Blanc. If you've read Fred Reed's post about China as the gleaming can-do country of the future, you might have seen I had a big discussion with a bunch of revisionists. They would deny all this, but you and I and lots of Americans over 50 y/o have witnessed all this.

This was just the 2nd part of the review out of 4. It gets worse - don't worry.
MBlanc46
PS To a great extent, China is a monster that Western capitalists and their politician flunkies have created. If those who rule us hadn’t been enticed by the huge profits generated by all that cheap Chinese labor, we might not have exported huge portions of our economy to China. We might not have allowed the Chinese to buy up large portions of our country. Apparently, they thought, or hoped, that they could control the beast. Silly rabbits. The beast controls them. With the Bidenreich just a bit more than a month away, Chinese control will be increasing geometrically. Learn Mandarin. Memorize Xi Jinping thought. Perhaps you too can be an apparatchik in the New America.
Moderator
PS: I was under the impression, Robert, that the horns were not on any of his heads, excuse me, xirs heads. I dunno. You do gotta wonder if these were metaphors or just descriptions of physical things that could not be imagined by John who wrote this all down from his visions.

We may find out soon enough.
Robert
PS: OK, this is completely off topic, but it has long bothered me: How do you distribute ten horns among seven heads?