The high point in human history? 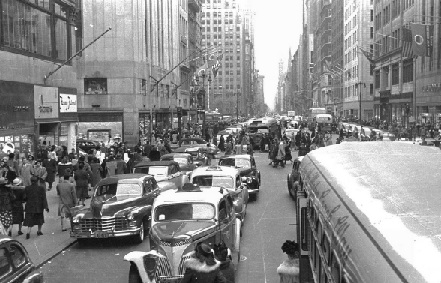 Under Part 2 of our review of the book We Have Been Harmonized, with it's rightful pessimistic view of the future, our regular commenter, MBlanc46 had this to say:

I’ve thought for some time that I had the good fortune to have been born at the high point of human history: Early postwar America. You younger guys will see more deeply into the future than I will, and I envy you that. That said, I’m pretty sure that it’s not a future that I want to see. Sure, it might very well have a lot more bells and whistles than the 1950s, but it won’t have the potential for the development of the human character and personality—I’ll refrain from saying “spirit”—that 1950s and early 1960s America had. Of course, the entire world economy could come crashing down, with consequences too horrible to contemplate. I can’t say which I’d rather see come to pass. Best of luck to you, and especially your children and grandchildren. May they have the strength and wisdom to deal with the hellish conditions that will confront them.

You've got to wonder if it could indeed be the case that a couple of decades of American history, the 1950s and 1960s, could end up being the high point in human history. You'd have never though it then, as that's what those optimistic times do, make you think that things will go on getting better. Is it vice versa now, that these bad times that seemingly deserve nothing but pessimism have us wrongly thinking that things will go on getting worse?

We haven't had enough Beatles on here, come to think of it. That'll get better.

The Darkest Hour is Just Before Dawn is from Emmy Lou's 1980 album Roses in the Snow.


Peak Stupidity thanks all our readers and commenters again. We'll be back with our feminism fisking and much more Kung Flu stupidity, and things not yet thought of next week.

ganderson
PS My goodness she was (still is,I think) beautiful.

https://youtu.be/Jn77ZraSZ8A
Moderator
PS: Thank you all for the great comments. It's nice to see 9 of them regularly, without 1/2 of them being mine!
Dieter Kief
PS - Achmed - you could be onto something rather old and approved here: "Is it vice versa now, that these bad times that seemingly deserve nothing but pessimism have us wrongly thinking that things will go on getting worse?"

Gelassenheit (=relaxability, to create an english approximation)) - that's the secret Hänsel & Gretel are at now, out in the "great north woods" (Dylan again, "Blood on the Tracks" again).

Ion
PS Biden is president. IT s Time for The Gulags.
Mob Rules
PS Be of good cheer. The Sunset Parade with Xi Biden and Commie La will be pure comedy gold.
Your daily laugh will be gut busting as the stupid challenge will get accepted without hesitation and taken to new levels.
Just go out and about on any given day and see how fundamentally destroyed this clown sh1t show really is.
The wizards of smart think resources are infinite or that mommygov can whip up some more land and water with a 3-D printer.
It has reached the point where a dope and video game loving sibling turned to me and said...this society is already destroyed.
Dtbb
PS:Howard Jones. Things can only get better.
The Alarmist
PS

I get puzzled looks from my European colleagues (in several countries) when I remark that Germany circa 1900 was perhaps the peak of Western civilisation.

I, like Mr. Blanc, was fortunate to grow up in America at the peak of its civilisation. I miss that America.
Han Velsing
PS Ever since 1980 fedgov has mostly been in the business of redistribution.
The Great Society is not so great but it did get the CPUSA (dems) some forever voters.
How will they buy votes when it takes a Weimar wheelbarrow of Zimbabwe wallpaper to buy get some bread and milk?
Just look at the soft fruity vehicles we have today and the way people go out in public in pajamas and house slippers well past noon.
You can see the rot and decline if you aren't busy staring at some telescreen or keeping up on the latest twit tweets.
Mr. Anon
PS The Apex of American Civilization was 1968 - 1976. And it was still pretty good about a quarter century on either side. 2001 was when the wheels really started to come off - actually it can be pinpointed to a particular day.

As Steve Sailer likes to say (or maybe he was quoting Yogi Berra): predictions are difficult, especially about the future. But I think it's entirely possible that we are at the beginning of a new dark age - a prolonged period (perhaps centuries) in which things get steadily worse.

Then again, maybe I'm being too optimistic.
ganderson
PS Mr. Blanc is a couple years older than me, but we are, I think, simpatico in our outlooks on life. Something about being Midwestern?

Heresy time: The Beatles made two of the best albums EVER- Rubber Soul, and Revolver. BTW in the US there was a record call Yesterday...and Today, which contained cuts from the above that were not on the North American releases.

The rest of their oeuvre is, not to put too fine a point on it overrated- lots of good stuff, but many songs and albums that, while back in the late 60s we thought were fabulous, have not worn well. I'd point to Sgt Pepper as one of those.
Robert
PS: According to Joe Walsh, the year was 1973, when things 'Couldn't get much higher'.

But, yes, I think Mr. Blanc was correct; even if I am a few years behind him.