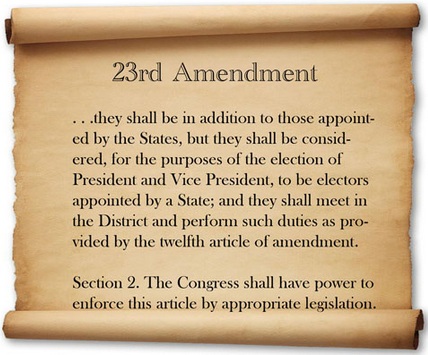 It's been almost 3 weeks since our post on Amendment XXII, as we continue this series to its ultimate demise , errr, finish. Here's the text of Amendment XXIII:

The District* constituting the seat of Government of the United States shall appoint in such manner as Congress may direct:

A number of electors of President and Vice President equal to the whole number of Senators and Representatives in Congress to which the District would be entitled if it were a State, but in no event more than the least populous State; they shall be in addition to those appointed by the States, but they shall be considered, for the purposes of the election of President and Vice President, to be electors appointed by a State; and they shall meet in the District and perform such duties as provided by the twelfth article of amendment.

[My bolding and my asterisk.] I'm surprised the writers didn't put that 7-year ratification time limit on this one, as they had for 3 other of the amendments**. The 23rd Amendment was proposed and ratified during the lifetime of some of our readers, so one might think of it being in the modern day. It was proposed by the 86th Congress, while Dwight Eisenhower was still President (Dick Nixon as VP), just before Kennedy, in June of 1960. It was ratified by the final State to put it into the document in March of 1961. I suppose the idea was simple, so there needn't have been much hard thinking involved.

This was purely political, simply about which party wanted some more electoral votes. That party would have been the Democrat Party, seeing as they had overwhelming numbers in the 86th Congress, that is 282 - 153 in the House of Representin' and 64 - 34 in the Senate. Wow!. This Congress was in session when Hawaii was admitted to the union, a place NEVER known to be any kind of Republican stronghold. That must have just whetted the appetite of the D's, and they were hungry for more electoral votes.

I won't delve into all the politicking involved, but perhaps it would have been a bridge too far to push for representation in the House and Senate from the Federal Shithole District too. There was a limit set on maximum electoral votes, as one can see, based on population of the smallest state. It was great that our Founders stipulated a 3/4 majority of States for ratification, or this type of dealing, changing the Constitution on the fly, cough, President Xi for life, cough, cough, would have been done long before. All it would have taken is a big majority in the Legislative Branch, as the D's had in 1960, for a party to take over completely, were it not for State approval.

Amendment XXIII was proposed and ratified just a couple of years before the Civil Rites era began in earnest. However, upon looking into Washington FS population demographics of the time on this urban.org page I read this little tidbit:

1950 also marked the start of the white exodus to the suburbs. In only two decades, the white population fell by over 300,000; DC became majority-black in the late 1950s.

There's as simple graph on that page (can not put that image in right now, sorry) that shows a very steep decline in white population of that city from 1950 to 1970, and a concurrent very steep increase in black population from 1940 to 1970.

What else would you expect the D-party to do but take advantage of their huge majority in Congress to get another electoral vote or 2 for next time around***? The R contingent in Congress likely had not much say in this, as they were overwhelmed, but one wonders whether many of the State legislators involved in the ratification voting were either too naive or already cucked out enough to not stand up against possible "racism" accusations. This stuff goes back a long ways.

The interpretation page at Peak Stupidity's usual Constitution Center go-to site had just a few more details, but no political angle this time. There is this piece of history, showing that things could have been worse for us, as far as Washington, FS is concerned:

We can give thanks for the ratification time-limit again, as this would have a better chance of being approved today, knowing the cucks that exist in modern American politics.

Does anyone remember the "Domino Theory" that was prominent in discussions of Communism during the Cold War era? The worry was that once one country fall to the Communists, say Korea, and later Vietnam, but it could have been the city of Berlin, Hungary, etc., then that's just that much more power in their hands to use to take over the whole world. No matter what the modern-day unz know-nothing commenters say, yes, "international communism" "national communism", whatever, they wanted the world. One could rightly argue if Korea or Vietnam was worth the wars, but the Domino Theory was no joke.

It would have been really nice if the Conservatives back in the day of the adoption of Amendment XXIII to our Constitution had been able to transfer this idea to the domestic struggle against the left, or the internal Cold War. Hello, Hawaii, or Aloha, I should say, here come a couple of electoral votes for the left, KER-CHING! Hello, Washington, Federal Shithole, there's another, KER-CHING! The more they get, the better the chance to bring in more.

I guess letting in 25 to 30 million illegal aliens is a whole lot easier than the pesky Amendment and Statehood adoption process. The left got a good break with that, along with the greatly increase legal immigration starting in 1965.

Well, they are pretty much there, as the right is beatable just via vote fraud alone. They could still speed things up with the adoption of Puerto Rico though.


* By "District" they mean what some call the "District of Columbia", more recently often called the "Federal Shithole", FS for short ... well, at least by this blog.

*** 3 in a row, numbers XX, XXI, and XXII had the time limit language in their 2nd sections. Why not this time?

MBlanc46
PS They thought that they were giving congresscritters to all the DC Negroes. It’s a bit ironic that the Negroes are being gentrified out of DC. But it’s still Dems, so no harm done.
Moderator
PS: Alarmist, I meant "actual Conservatives in Federal office" (if any!)

You are right though regarding taking it to the streets. I just wrote a comment under Michelle Malkin's latest column on that (the Proud Boys).
The Alarmist
PS

@Moderator said, “The actual conservatives left in this country would be morons to let this happen.”

As if they have any way to actually resist this short of taking to the streets by the millions. The problem with being law-abiding types is they tend to not do that, and as the Proud Boys ruse shows, when they do, it will be Conservatives who are labled terrorists when attacked by AntiFA.
Moderator
PS: Oz, you beat me to this. I wanted to submit what I had and add a bit about the new plans at the end. Yes, they want Puerto Rico. The actual conservatives left in this country would be morons to let this happen.

Thanks for the comment.
Ozymandias in the Wintertime
PS The CCP serf colonies of DC and Puerto Rico will be added and the greatest people to ever walk the face of the earth who fancy themselves as destined to rule over flyover country rube deplorable kulaks will still proclaim themselves as the masters of the universe.
What a golden age of comedy this clown sh1tshow will be.