What's the matter with Sportsball? - Part 1 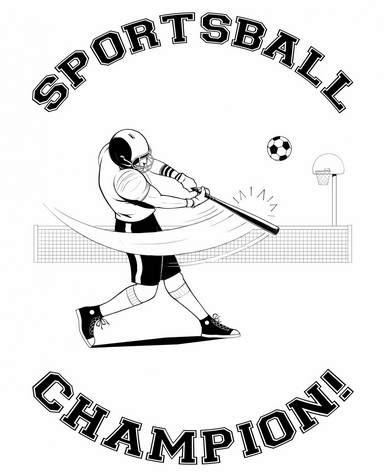 Just from our use of the term "sportsball" here, the astute reader may already figure that we think there is a lot the matter with sportsball. Peak Stupidity commenter Ganderson defended the ubiquitous American obsession* with spectator sports, big and small, in one of his comments under our R.I.P. - Chuck Yeager post.

I appreciate all commenters here (so far!), and this is a minor disagreement I have, if any at all, on the topic. Anyone who follows Peak Stupidity coverage regularly on the myriad types of stupidity going on out there is bound to read something offensive to him. Also, for those who keep up here, I doubt any following of spectator sports as an enjoyable hobby detracts from their understanding of the importance of our miserable political situation too.

That is my first point, and the one with which I replied to our commenter friend. I run into too many people, who even to this day, spend so much more attention to the sportsball games, players, stats, etc., then they do to politics. Well, it may be true that there nothing you can really do regarding politics, but one could say the same for the next NFL game too. Is your fandom going to change the results?

Who cares? It's just a pleasant hobby for people and better entertainment than some of the other crap on TV. I get that. If it's a game that you play yourself, I can't knock your watching the pros for tips.

That said, you may not be interested in politics, but politics is interested in you. (No, I did not make that up, but I really like that one!) America has had such a great run of peace (at home, anyway) and prosperity that people may rightly figure that they don't need to pay attention to politics. That time is over. Any thinking person should see that by this point. I think there is always something one can do to affect change, even if it's only bringing things up to friends and neighbors. However, Americans have had the luxury of not having to worry so much about politics that it is considered rude to rile people by starting in about politics. Talking about sports is so much more polite.

At the same time, because some American men spend so much brain power and emotion on "their team", I've seen guys that would get in drunken fights over insults to their team or idols. Yet, had you just told them that a new law against free speech had been passed or the legislature is instituting more gun control, you'll likely hear "it is what it is" and "you can't fight this stuff". Lots of Americans are spending their time, effort, and mental and emotional energy on the wrong things. In a 2-year-ago post we discussed SportsBall as the Circuses in the "Bread and Circuses", and wondered if this distraction is purposeful.

Another thing I will note here is that as the country has been homogenized by region at least as far as traditional Americans are concerned (for example, the South is not so distinct a cultural region as it was 50 years ago), and Americans are so mobile, what is the point of the "home team" anymore? Those Baltimore Ravens players, are they really long-term residents from Baltimore families who have any connections to the community? Nah, there is no connection and loyalty for most of the players. Hell, there's an ice hockey team in Charlotte, N. Carolina. Did those fellows used to play out on frozen lakes in the winter with some guys you knew from high school? Haha, not hardly, as nobody ice skates in Charlotte, unless it's a one-time novel treat or he isn't really from Charlotte and gets his doughnuts at Dunkin Donuts instead of Krispy Kreme.

As I wrote to Mr. Ganderson, baseball is one piece of American culture that I appreciate myself especially at the Little League or minor league level. It's a pastime, as they say, as much as a sport, and one that I hope stays around at least as long as this country does.

The rest of what I have against "sportsball" is the racial and, as of late, political aspects of this "industry". I'll address those problems in Part 2 tomorrow night ... after the ball game.


* Note that "obsession" is my term, not Mr. Ganderson's. He likes his hockey, and more power to him.

A shot of George Dickel or Basil Hayden goes down just as well.

And, the other nationalities that make up the hockey universe tend toward toward niceness- even the New Yorkers and New Englanders tend to be friendlier than average... as for the Minnesotans...

And Mr Blanc - you’re right about the male bonding- my hockey group on Wednesday nights is as much about hanging out as it is about playing. My wife laments the fact that our three boys and I have a sports bond- lament is probably the wrong word, as she thinks its good, but she doesn’t feel it in the same way.
Moderator
PS: Great conversation here. I wanted to address some of these points in this Part 1, but I'll just tack them onto Part 2 at the beginning or the conclusion. But, first, back to face diaper stupidity - will write at the park.
MBlanc46
PS There’s a lot to be said on this topic. Sport was a significant element in the development of the English working class. It must be the case for the other European countries, as well, but Britain is the case that I know best. Getting Saturday afternoon off to play, or watch, a football or rugby or cricket match was a real advance and a solidarity builder. It wasn’t merely the working class, either. Lines of carriages wandering up to Lord’s from The City as a match became critical is a trope for a reason. Sport functioned in the formation of national consciousness, as well. We don’t call baseball the national pastime for nothing. Sport is also a major avenue for male bonding. It’s a guy thing. I’ve never gotten women having any interest in sport, except, perhaps as a means of cozying up to a guy. Okay, lesbians, but that’s something quite different. For the non-butch, my mother’s attitude is the feminine attitude: Silly men chasing balls around. Television and big money have ruined it. Adopting the Negro versions has had a negative effect, changing the games, and inducing Negrolatry in a lot of white guys. Sport is a significant part of the youth of most guys. Guys who don’t want to lose touch with their youth have a soft spot for sport.
Adam Smith
PS: Good morning everyone...

"the NHLer living next door would come over and help you shovel your driveway!"

I agree with you. It's not the sportsball per se, but the over glorification and the public hype around some of the professional sports. The taxcattle subsidies for billionaires are pretty obnoxious, though not unique to sports. The bad and sometimes criminal behavior of too many professional sportsballers is fairy unpalatable as is the overemphasis of sports in institutions allegedly dedicated to higher learning.

Baseball is a more civilized sport than football. The NFL provides better circuses for the subjects of an authoritarian "government" with imperial ambitions by increasing "irrational attitudes of submission to authority" ala Chomsky.

A jigger of Akvavit sounds nice but I'd be a little surprised if I can find it at the small local liquor store. I'm headed there for a little Christmas Bourbon, so I'll ask. Maybe they'll have some Calvados? (I doubt it.)

Merry Christmas everyone.
Cheers to everyone's good health and wellbeing.
I hope you all have a great day.

☮
Ganderson
PS. I suppose I have to comment here- I think I have time before the UMASS hockey game starts....

I think, Mr. Moderator, you make excellent points, and in my own defense I’ve never engaged in fisticuffs over a match. I guess I enjoy watching excellence- I play golf, and seeing guys do what I mostly can only dream of is , I dunno, interesting to me- same with hockey -my hockey career is a testimony to the notion that “ anything worth doing is worth doing poorly”

That and the fact that hockey players are different from other sportsballers- perhaps because there IS no ball? As I’ve observed many times, if an NFL or NBA player moved in next door to you the prudent thing to do would be put your house on the market; the NHLer living next door would come over and help you shovel your driveway!

I’m guessing that what many in our thing object to is not sportsball per se, but the corruption that goes along with it, whether it be public subsidies, the rampant criminality and general bad behavior of some (many?) sportsballers, And maybe those things are part of the enterprise, and can’t be eliminated; I dunno.
Mr. Moderator, your point about baseball is interesting- the last live game I went to before the madness began was in Cleveland- although we raised our three boys in New England they’ve seen more live baseball in Cleveland, Detroit, and Chicago, as these are convenient stopping off places on our annual trips to MN. Anyway- I bought a ticket behind home plate next to a guy and his high school/college age sons. A wonderful night, nice guy, nice kids. I’d hate to see that go away.

Merry Christmas to all the Peak Stupids- have a jigger of akvavit ( hej tomtegubbe slå i glasen, och låt oss lustiga vara...) watch a good xmas movie - It’s a Wonderful Life, Scrooged, or even Blackadder’s Christmas Carol, tell the maskers and social distancers to SCREW!
Dieter Kief
PS Sports is the realm of winners and losers. And that is not false but - not terribly insightful too. Modern societies would be worth off without sports, and analyses which don't take this thought into account are not very profound. But there is much more in modern life and politics that counts. So - he who looks too close to sports for sure misses a lot that matters. The binary winner/loser logic of sports is especially insufficient in hindsight of the many cases in which there are no clear winners or losers. In other words, the - most likely - most important mode of modern societies, which is the muddling through (trial and error) principle might well be under-exposed in the tool kit of people who are leaning a tad too much towards sports as the - hm - universal metaphor (=door-opener to the chamber of insights) for modern life.
Moderator
PS: Thanks for that graphic, Adam. I may switch that one in and use the one here for the racial angle post.
Adam Smith
PS: Good evening Mr. Moderator...