What's the matter with Sportsball? - Part 2 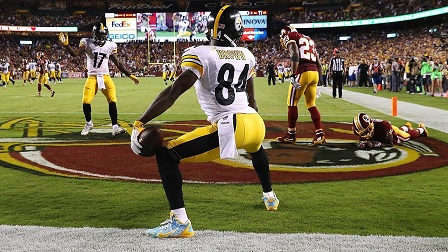 In reply to some of the comments under the previous posts, I want to make it clear that I'm writing about spectator sports too. I understand that if it's a sport you play, you'd want to watch the pros at it also. I understand the idea of learning teamwork and having camaraderie. Most American men who spend so much time on the sportsball spectacle and hype have likely played some in high school and that's about it.

I'm getting a little bit repetitive with respect to that post SportsBall as the Circuses in the "Bread and Circuses", as I'd forgotten I'd covered some of this, so let me just get to the racial stuff that wasn't covered.

These aren't your people, most Americans. Look at the thugs that they've got playing and their unsportsmanlike behavior. I especially mean football and basketball here. What do you have in common with most of the players in the NFL and NBA? How do they represent America? Why should you care about there well being, as you know they don't give a rat's ass about you?

They are glad to take your money, but that's all they care about out of you. What does it say you care about when you wear some jersey with your favorite player's number? (How about a MAGA hat instead?) The purchasing of the merchandise and the TV ratings are supporting guys that are getting unearned glory, while white engineers and scientists are seen as geeks. How does that help our culture? Unfortunately, even if it is only hockey or Communist Kickball you pay for cable to get, you support the whole circus with that money.

It's gotten worse than just that lately. With the leagues' managers and players turning political on us, and not in a good direction, now they are actively saying that hate our kind. I haven't seen any of it, not being any kind of fan, but I do read about some of this on Steve Sailer's blog. They are just rubbing the anti-white agenda in our faces now (for those who watch, so not me). Why would you want to let them?

So, here we have still tens of millions of American White Men who spend more energy, time, and money on this sportsball than they do on anything that may help what's left of the country politically. What are our enemies, mostly domestic, but foreign too, to think of, regarding our will to fight back? I guess they figure Bread & Circuses worked to distract the Romans during their fall, and it's working again here and now.

That's what Peak Stupidity thinks is the matter with sportsball. No doubt men need to learn teamwork and camaraderie. I think there will be new venues for that in the near future.

That pic is a disturbing commentary on modern American life.

My fave would be the bleachers in Wrigley, as I could afford them on my paper-route earnings when visiting my old auntie in Chi Town. Caught a ball there once.
Moderator
PS: Misters Ganderson and Blanc, at the risk of sounding too much like Steve Sailer by replying to every comment about baseball (oh and Hollywood actors), let me say that maybe Comiskey Park is somehow in a more temperate zone than is Wrigley Field (haha).

I mean, this was mid-May, and my friend and I had to keep moving seats every other inning to stay in the sunshine to keep somewhat warm. It wasn't very full, so there were seats to move to. We were ready to pull the old "oh, I guess I need reading glasses. I thought this said 'right behind the 1st base dugout'. Ooops."

Mr. Blanc, a family member quit cold turkey off of MLB after that year. I think it wasn't the WS, but the strike itself. At least I think that was the same year. When he quits, he stays quit.
Ganderson
PS. At the risk of turning our host’s site into a sportsball forum, the second deck boxes at old Comiskey were among the best seats in baseball. Wonderful place to catch a game. I don’t hate the new one as much as many do- but if it only had been build 5 years later it would have been Jacobs or Camden

After my hometown Chicago was my favorite city- mostly gone now, sadly, just like the Twin Towns..

Merry Christmas Mr. Blanc, looking forward to pizza next summer! If we’re not welded into our houses, that is.
MBlanc46
PS Playing when young and fit enough, even if not good enough to make “the team”, and watching and caring about when older. These are part of being male in America and much of the Western world. Wearing a replica of the shirt of some pro by grown men gives me the willies. Good god, man, have you no self-respect? It’s all part of the corporatization of sport and the corporatization of America. When going though things at my mother’s house after she died, I found some old ephemera of mine. Among it was a ticket stub for an upper deck box seat at Comiskey Park in 1980: $6. If memory serves, beer was $2 or $3 and parking maybe $5. A warehouse worker, as I was in those days, could afford to go to a game, and take the kids. Not, anymore, at least so far as I know (I haven’t gone to a game since they knocked down the Baseball Palace of the World and replaced it with a monstrosity). Gave up on the game completely when they canceled the World Series in 1994. Sport itself is good. Sport when taken over by the bankers and the investor class is what everything is when taken over by the bankers and the investor class.
Moderator
PS: Merry Christmas to you, Sir. I will put up a post tomorrow, of course.

Yeah, there were pick-up games for everything. During the last 20 years of helicopter parenting, and now worse* that doesn't happen so much. The best you can do is drop them off at the park, for the older kids one with sports fields or at least lots of room and let them figure it out.

I never quite got the concept of wearing some sportsballer’s jersey ( or sweater, as it’s called in the hockey world) unless, I guess, if it’s your kid on the playing surface. I have a number of hockey sweaters, but they are worn while playing hockey.

Mr. Moderator- you mention people still playing that played in HS- in my day not being good enough to make the team didn’t mean you didn’t play- you went out to the playground, or the local outdoor rinks and played. Less of that now, I think, among both kids and adults. Not a good thing, IMHO.