Collapse of the Service Economy - Part 3

(Continued from part 1 and part 2) 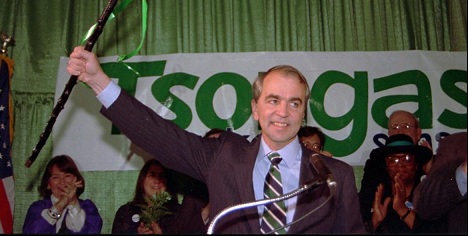 To wrap up a little bit, what I've concluded for myself (may be quite obvious to others) is that an economic entity cannot run a sustainable economy based on nothing but a domestic service industry. Back 25 - 30 years ago, when the idea of this wonderful service economy that America would become (see, no messy factories, no smoke, no grimy hands) was pushed, these economists and politicians thought we could be the service industry for the world, perhaps thinking of the way we'd been the manufacturing economy for much of the 1st world before. A guy at the coffee shop just this morning mentioned ex-President Clinton's Secretary of Labor with his 1991 book The Work of Nations, which extolled the idea (per coffeeshop guy, who is a decent honest, conservative, pro-White, intellectual).

This wasn't about just making each other gourmet burgers and craft beer. Americans still made all the important advances in computer software, computer networking, and had intellectual capital that still beat the rest of the world. We could get the messy, polluting manufacturing out of here and the same people could work in nice clean offices, OK, cubicles now, making spreadsheets, and filing paperwork electronically. Additionally, engineers could do their portion of the production here at home while things got made to our specs in Mexico and, a bit later, China.

Did anyone worry about the idea of these other countries picking up the clerical, computer, and engineering work themselves? I could see no thought about the internet changing everything within a decade, as I don't have that kind of foresight either. (I thought that's what some of these people were paid for though...)

Maybe some of the folks pushing this stuff didn't care either way. The Globalists were going to come out fine on this. I can remember having a discussion with a friend about all the work going on in China back in 1996, and I didn't get it. He did. However, I do know that I was not comfortable with the idea of the US converting to having a service economy.

This was in Winter of 1992. The guy pictured at the top is former Massachusetts congressman/Senator Paul Tsongas. He was one of the many (I recall 5 or so well in the running) running for the D-squad Presidential nomination in that year. I'd already had enough of George H.W. Bush for breaking his "no new taxes" pledge. He'd told us to read his lips even - guess I'm not a good lip reader Also, he'd pandered in Spanish in the previous election, turning me off long before anyway.

Mr. Tsongas was one of the old-time D's, I guess, though I didn't think about this stuff. I just knew that here was one guy in the whole campaign that brought up this stuff about keeping manufacturing here. I volunteered to help in the primary campaign in my State. All I ended up doing, as I recall now, 28 years after, is helping by driving around a NY Times reporter from the nice hotel to the local manufacturing plant where candidate Tsongas would have a press conference.*

I ended up about 6 ft. from Mr. Tsongas as the small press conference went on inside the factory. I even had a question to ask him, probably about this service economy idea which he was there to argue against. It wasn't a lack of courage to speak up, but I just thought that, as a campaign helper, it wasn't part of the deal. I kind of regret that I didn't speak up. The press conference ended well, but that campaign, as anyone could remember or look up, ended pretty soon after. It was the S. Carolina primary which put Bill Clinton, just another Globalist, up to the top of the pack.

By March 19th, Paul Tsongas was out of the campaign. He died in 1997 of the lymphoma that he had beaten off once back in 1983. Then, Ross Perot had come on the scene, also telling us to back off on this outsourcing so we would avoid that "giant sucking sound" into Mexico. During the summer of that year, he may have been "deep stated" as we wondered a few years back. Mr. Perot died just last summer.

Back in the day, there were some serious politicians who cared about Americans. Recently, we've just had the one. (Well, he cares about Americans. Serious? Not so much.) This is not going well.

* OK, now the memory gets pretty good, as I remember I drove the big-media young lady around in my muscle car with the rebel flag front license plate. While we talked a bit about politics, for my amusement I mentioned that, "yeah, and that David Duke fellow may be the guy to vote for too, I dunno." This young white gray lady reporter didn't seem amused in the least!

Yes, I did. My earliest experience was on the Sell-Side, where I learned that nobody on the Sell-Side is a friend to anyone on the Buy-Side, to wit Orange County and P&G. Heavy math is the stuff of derivatives, among other things.I was still polite to my paymasters then.

By the time I hit Europe, I had moved to the Buy-Side, and no longer felt the need to be nice to the Sell-Side pushing their poison at me. Heavy math is still useful for evaluating whether any of that poison might still work for us.
Moderator
PS: I got through your 2nd-noted typo with no problem, Dave. I should be the one apologizing for the lack of an editor here. Thank you for writing in!
Dave
PS More typos on my part.

My apologies to all. I swear that I was not drunk when typing that entry.
Moderator
PS: Dave, thanks for that info. I wonder if that type of bribe was done in addition to threats of some sort. Ross Perot seemed like a straight-up guy who was in it all for the good of the country.
Moderator
PS: Mr. Blanc, "I told you so" does help just the littlest big, I guess ... it's not the same as still having your country, though.

Re just your one part about the term "servicing": For a while, it seemed like gate agents and flight attendants had gotten ahold of that term and run with it. "I am pleased to be able to service you today." "Reaaally?"

Now, were these the flight attendants of the 1970s, then not only would I believe she knew the term, but I'd be all up for that servicing bit. Alas ... I think someone set them straight finally that "serve" and "service" are not quite the same verbs, and as for the latter, I don't think it means what you think it means ...
Moderator
PS: Mr Alarmist, did you end up working in the financial "industry" at all? (That wasn't clear from your comment.) Ron Unz did a similar thing. Maybe because I'm not at all familiar, I just can't see how the really heavy math applies there, but it obviously does. Not in a productive (to society) role it doesn't, of course.

Hopefully, those guys in your ps paragraph were not good friends. People hate being told they really don't know real life and are living in the ivory tower.
Dave
PS Pardon the typos in my last entry.

It was supposed to be Navy Marine Corps Initiative.
Dave
PS I have heard that Ross Perot's company EDS was given a nice, profitable contract as a bribe to get out of the Presidential race.

This sweetheart deal gave all of the Navy's computing functions to EDS (for a handsome price, of course). The Navy paid EDS to replace ALL existing computers, monitors, printers and the like. EDS got to keep all of the old equipment for free to resell or sell for scrap. Again, what a sweetheart of a deal.

The Navy got a substandard system that is a nightmare to this day.

The best government that money can buy! And, in this case, bought with taxpayer money.
MBlanc46
PS Maybe it’s because I come from the actual working class, but, whatever the reason, I could see through the idea that we Americans would all be “middle class” servicing each other (not in THAT way, you nasty boy), whilst the rest of the world did the dirty work. All I got for my prescience is being able to say “I told you so”, whilst I watch the republic that my ancestors built become a Third World hellhole.
The Alarmist
PS

I was fresh out of the military at the end of the ‘80s with an aerospace engineering degree that was more valuable on Wall Street (NASA was a shell of its former self, and the aircraft industry was not very interesting) for the quant and programming skills, and I remember asking one of the “superstar” economists how this evolution from lower tier to higher tier orders of economic activity worked, and the answer was something along the lines that Asians weren’t capable of thinking in ways that allowed them to do the “thinking” jobs higher up the food chain. He didn’t use those exact words, but that was the premise of what all the best and brightest were thinking as justification for outsourcing the smokestack industries.

p.s. Fast forward to 2016, in London the day before the Brexit referendum, I was having lunch with a respected City (of London) economist, who told me he was pretty sure the referendum would fail, to which I replied, “You don’t get outside the M25 much, eh?” The look on his face was priceless. Other great lines I’ve used on these guys and gals include “You don’t do the family shopping, eh?” to the party line that this is little to no inflation, and, when they appear to be really thick, “Do you do any more research beyond reading the official statistics?”