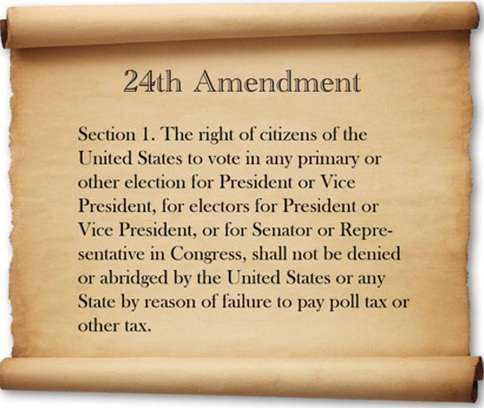 Amendment XXIV was proposed by Congress (as in voted "yea" on) in August of 1962 and ratified by January of '64. It reads as a very minor detail in the big scheme of Federal voting rules and rights, but, as usual, it's got usurpation of States' Rights written all over it. Here is the full text from our usual source, the Constitution Center site "Interactive Constitution" (yeah well, the less interaction, the better from what I've seen in hindsight):

Note first that this restriction on one specific restriction on voting only applies to elections for Federal office. Also, though you'd think the lawyers would have caught this, that bit about "other tax" makes me wonder: If you are 10 years behind on your State income tax, or your county property tax, will they let you vote from jail? Maybe they've got that covered.

This was mid-1962 to early 64, during the early stages of the increasing Civil Rites stupidity that we've all been suffering from ever since. The big legislation hadn't been passed yet. There were people pushing the stuff in the Kennedy administration, and the House and Senate were overwhelmingly Democrat, yet the spark by the usual crowd hadn't ignited in this still conservative government and people yet.

The poll tax, along with literacy tests and such, had been used in Southern States to keep the black vote down. However, as our usually helpful Interpretation Page notes, plenty of poor white people were prevented from voting too. The money we are talking about, even at the time the last States had this tax in the early 1960s, was 1 to 3 bucks, approximately $10 to $30 in today's money. The complaints about it remind me of the current complaints about a State ID (usually driver's license) being required. When you count the time down at the DMV, if you really don't drive, then I'd say the current complaint is about more money (time being money) today, though the principle of having honest voting overrides that argument*.

I don't think the poll tax was any big burden. As I started to note above, the particular interpretation page on that site for Amendment XXIV is not your usually unbiased factual information. Of course, they had to get a black woman, as I guess Amendment XXIV was another "black thing", really poor (or obstinate) white people notwithstanding. There are different writers for these pages, but this time they've got this Deborah Archer who is "Professor Law and Director of the Racial Justice Project at New York University Law School". Yes, [sic] in her freaking bio! The other writer, one Derek Muller, with his bio including that missing "of", is likely there to check her work on the legal stuff and the history**.

It would have been nice to see more discussion without the racial angle, as this is an issue to think about. States' rights aside for a minute, don't we want voters who can make good, informed decisions or with some skin in the game? Maybe a poll tax is not the way to go about this, but then then I see these concerns being a farce when I read about the subsequent (1965) Supreme Court decision to overrule Virginia's provision for an alternate provision for those not wanting to pay that poll tax, after this Constitutional Amendment had been ratified. This was covered in that interpretation page, but I'll take this from the wiki page on the 24th Amendment.

The state of Virginia accommodated the amendment by providing an "escape clause" to the poll tax. In lieu of paying the poll tax, a prospective voter could file paperwork to gain a certificate establishing a place of residence in Virginia. The papers would have to be filed six months in advance of voting, and the voter had to provide a copy of that certificate at the time of voting. This measure was expected to decrease the number of legal voters. In the 1965 Supreme Court decision Harman v. Forssenius, the Court unanimously found such measures unconstitutional. It declared that for federal elections, "the poll tax is abolished absolutely as a prerequisite to voting, and no equivalent or milder substitute may be imposed."

Whaaa? This decision was bullshit. I could see that Virginia was not allowed to have the poll tax, per the new Law of the Land. Fine, but could they have just had the 6-month residency requirement for everyone?***

Our Founders did not want everyone to be able to vote. They also wanted the power to determine who can vote and who can't up to the States. It took how many, let's see, XIV, XV, XIX, 3 so far, and (spoiler alert) 1 more that we haven't discussed, so 4 Amendments to force the States to change their ways. The Feds absolutely do not like this "experiments in democracy" deal that the various States are supposed to be part of. If you don't like the poll tax, quite understandable, then work to change it in your State, rather than running to tattle-tale to Uncle Sam. Failing that, move! OK, that alone would probably be not enough to get 99.9% of Americans to move, so I suppose it's not THAT important compared to things that are better about your State.

We at Peak Stupidity are big State's Rights advocates, OK, mourners, so, again, we are not happy with Amendment XXIV. Note the way it's been used abused since, even just a year or so later.

* As a Libertarian, I'm all about not needing to show any "steeenking ID" to the cops, for example, but then you could just not vote, in that case or get some other type.

** I'm sorry, but ever since Affirmative Action was in place (OK, my whole life), I will just have to assume that AA types are not the brightest in the class or office. Yeah, some are, but how am I gonna know that, with AA in place?

*** It seems like a no-brainer to have just disallowed the poll tax wording period, and taken out the phrasing for the residency requirement to be in lieu, and made it THE requirement. Nope, but that wasn't the real intention here (it was 1965, you understand ...). From this CaseLaw page on Harman v. Forssenius, which one doesn't need a law degree to read, we read from the decision:

Reaching the merits, the District Court held the certificate of residence requirement invalid as an additional "qualification" imposed solely upon federal voters in violation of Art. I, 2, and the Seventeenth Amendment.

2 (a) The poll tax is abolished absolutely as a prerequisite to voting in federal elections, and no equivalent or milder substitute may be imposed. P. 542.

[My bolding] The residency requirement in no way violates Amendment XXIV, but SCOTUS has ruled! So let it be, cough, cough, this is bullshit, cough, written, so let it be done.

I agree with you Mr. Ganderson, unfortunately literacy tests be rayciss...

Perhaps the franchise should be extended to six year olds too.

Proves that lockdowns work, I guess.
MBlanc46
PS I don’t disagree with your point about “states’ rights” (or, even much more local rights), but perhaps the best way to limit the effect of federal election laws is to severely limit the power of the federal government. Of course, that train left the station long ago. So I’m talking about whatever polity we might be able to carve out of the former USA.
Moderator
PS: OK, Ganderson, take off, we've got your take (and agreed), so you can get the puck of here. Enjoy the game.

CB, yeah, well especially at that low amount. I mean, it wasn't like you had to sell your horse and buggy to get the cash to vote.
Cloudbuster
PS In my opinion, the poll tax wasn't nearly a big enough barrier to voting.
Ganderson
PS Tonight: USA- Sweden- World Junior Hockey Tournament - NHL Network.

Nice diversion as the world crashes down on us
Ganderson
PS I’d go back to property requirements. And literacy tests.

Don’t think things could get worse, but they probably will.