Will America be looted by China? - Part 3: Big Biz 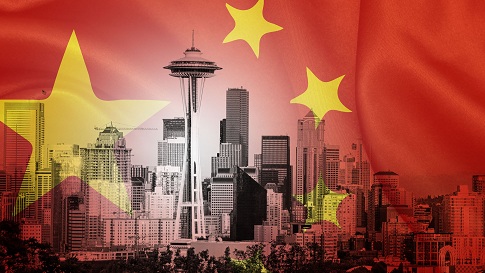 The worry in the 1980s about foreign takeover of American industry was directed at Japan. The Japanese way of doing big business in America, since the 1980s, was opening plants in this country. Americans have been placated with those efforts. "The jobs are here." Yeah, well the decent line and lower/mid- level management jobs are, but the important engineering jobs aren't.

It's been the same with Nissan, Kia/Hyundai out of Korea, Mercedes, BMW,
and VW out of Germany, etc. They've all got auto plants here, almost all in the South for the cheaper labor. The control of the enterprises are foreign though, though it's nothing like looting, of course.

Perhaps the Chinese haven't done any of this because their car manufacturing hasn't been up Western and Japanese (for sure not!) quality standards, and 25 years ago they hardly had an auto industry. Secondly, they don't care about placating Americans and getting along. That is so 2000s. The way things are going, they may be able to just buy one of the big 3 lock, stock, and barrel.

Smithfield Foods, bought by Shuanghui Group, now called WH Group, for $7.1 Billion in '13 remained the 2nd biggest at the time of this > 3 y/o CNBC story, but who knows since then? (Well OK, the internet knows, but I've only done a quick DDG search.) It's the most famous case of the selling off of American industry. From that article we are told:

The deal spurred controversy and concern at the time, but Smithfield has thrived, adding jobs and hitting a sales record in 2014.

No, it's not alright, though. This is all about control. For the sellers of this big American food firm, and the Chinese buyers, yeah, it's about money. For regular Americans it results in essentially working for the Chinese CCP, when it really comes down to it. Once could bring up laws or proposed laws against holding of stock by foreigners, residency requirements for corporate boards, or what-have-you, but the Chinese are in charge. Follow the money.

For anyone in government actually trying to help Americans with regard to foreign influence and the trade imbalance (like President Trump has), face it, it's gonna be tough curtailing exports of pork in a trade war when the Chinese own Smithfield Foods. You'll have the whole State of Virginia against you. If you think that Big Biz is unpatriotic, and it sure is, imagine he case when it's owned by the Chinese. They'll be plenty patriotic .. to China and the CCP, though. 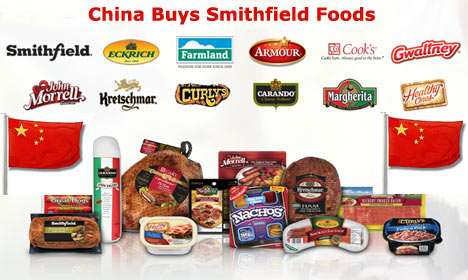 Other names I recognize are GE Appliances - now that's iconic. The manufacturing facilities are still there in Louisville, Kentucky, but those employees work for Qingdao Haier now. It cost these Haier folks $5.4 Billion. You can buy ~ 200 such companies with a cool Trillion bucks. The Motorola mobile phone division has been owned by Chinese Lenovo (who also bought the IMB laptop business) back in '14. That was an ~ $3 Billion purchase.

Then there are the movie theater chains that the CNBC page lists as big purchases by Chinese companies. Haha! That was dumb! Nobody expects the Spanish Kung Inquisition Flu! Oh, and VHS tapes, DVDs, or Netflix ...

A 5 y/o Yahoo (yeah, I know) page lists The Biggest American Companies Now Owned by the Chinese. The biggest purchase, money-wise, was of Starwood Hotels, bought by Anbang Insurance for $14.3 Billion in'16.

There's probably a lot more of this by now, and it doesn't help matters at all that American small business is getting creamed by the Kung Flu PanicFest. What about the big "TECH" guys, like Amazon, Google, etc? Would you bet any serious money that some of them won't be Chinese-owned within 5 years? Not this blogger. I value my money more than ... OK, it'll probably lose so much value that I don't have much to lose anyway.

* It's in quotes because I don't know 1/2 these companies. That's partly due to that I don't give a rat's ass about "League of Legends" and also the movie industry, but I guess it's a sign that they haven't got too far yet.

Since China’s domestic pork industry was mysteriously wiped out by swine flu a couple years back, boosting chinese demand for American pork, it only makes s3nse they’d secure the supply chain as best they can.

@Robert ... your reference to the 20oz. Pint is to the good, old Imperial Pint, which in blighty is still a mandatory measure for service of glasses of cider and draught beer.
Beyond Thunderdome
PS Thanks for the list, I don't eat any of that Frankenfood but it is good to know what to avoid.
The terminal madness of the National Bolshevism is just getting started, plan accordingly.
The Great Reset Leap Forward will be the same stale mountain of skulls on the road to a failed man made utopia as the mammals with pants worship the mammon known as mommygov.
Look for everything to be banned as a soft weak society of overabundance worries about insignificant trivial matters until the external enemies enter the gates.
They won't give a rip about good feelz or I'm offended pearl clutching snowflakes.
Adam Smith
PS: Good morning everyone...

Mr. Moderator, I didn't realize that some Toyotas available here are still made in Japan. The Toyota Land Cruiser and the Lexus LX 570, for example, are still made in Japan. They both seem a little pricey at $85,000-$90,000. (Interestingly you can get a 144 month car loan.*) Apparently the first Lexus built outside of Japan was built in 2003 in Cambridge Ontario. They also started manufacturing the Lexus ES in Kentucky in 2015. Toyota has recently shifted production of the Tacoma to Mexico from Texas.

Mr. Ganderson, thank you for the compliments. It's good to know that the 07 Accord is still a good solid low maintenance car, the kind Honda is known for. Cars from the 60's are fun to work on. No computers or sensors to mess with. Everything is mechanical and there is plenty of room under the hood to work. I have an old 1984 Mercedes 300sd with the 5 cylinder turbo diesel that is a bit like that. No computers, all mechanical. The interior is beat but I do not yet have the heart to part with it as it is otherwise bullet proof. The car is made of real metal. It's heavy but still gets 30 miles per gallon on the highway. That old cast iron motor can easily go another million miles. (It only has 290,000 on the odometer.) Maybe one day I'll find some newer/better seats for it and give it a fresh coat of paint.

Pints in Canada are 20 ounces and you can file a complaint with Measurement Canada if someone sells you a pint that is not a full 19.5 oz.

I hope everyone has a great day.

* https://www.snocope.com/loans-and-credit-cards/auto-loans
(For loans of $40,001 and up, we have 15 year terms with 12 year balloon payments available.)(Crazy)

☮
Moderator
PS: Contrary to that situation, Robert, I've been to a place, part of a small chain of large drinking establishments with a selection of 100 beers or so that gave you a 14 oz. glass when it specifically says "pint" for all the beers on the menu. If you say something, everyone just thinks your a cheap-ass, but I don't know how they got away with this (or still do, maybe).
Robert
PS: Mr. Anderson,

Many years ago I had an English friend who was quite disturbed at the size of a pint of beer in These States. My understanding then was that if you ordered a pint of beer, they could give you whatever they wanted in their kinda pint sized glass. If they advertised a pint, it had to be 16 ounces. But, 20 ounces of beer is definately better.

Did the 20 ounce pint apply to anything other than beer?
ganderson
PS. I will defer to Mr. Smith re automotive matters- pounding in nails and screwing in screws is the outer limit of my mechanical expertise. Although back in the Pleistocene I use to be able to do simple maintenance on my autos- I recall replacing the alternator on my '67 Valiant (slant 6; 3 on the tree!)

That said, my understanding is that pretty much all the Accords in the world are produced in Marysvlle, OH- last summer I traded in my 2007 Accord which had 260k miles on it; very little non-routine maintenence had been done - and I'd bet someone with your abilities, Mr. Smith, could have coaxed another 100k out of the sucker. Great car, and don't think much of an outlier.

I'm sorting out my opinions on trade- I was once a pretty ardent free trader- I've come around to the opinion that free-ish to free trade between and among similar countries is mostly a good deal, but trade with places that do not share your cultural assumptions can be difficult. And generally no free trade in labor, although I could imagine that a free labor market between the US and Canada, say, or of the Scandinavian countries might not be so bad. Heck even the EU might be ok, at least until they stated regulating the size of pint glasses....
Robert
PS: Is that Armour of Armour hotdogs there in that picture? The dog kids love to bite?

Now that is a step too far, sir.

P.S. At least we have the hotdog eating championship back in American hands.
Moderator
PS: Thank you for the correction, Mr. Smith. That was way too hasty of me to assume that based on just my old recollections and the numbers I saw for Korean cars at the dealer. It advertised "American Made", which was an incentive to me, of sorts, but the number manufactured in the plant here was 5% of total sales, as seen on a map they had in the office. However, it wasn't 5% of US sales.

Yes, 70% of Toyotas for the American market are made here. Most of the others aren't made in Japan either, I guess. Mexico, where else, Adam?

My apologies to the readers for misleading you. I took this part out.
Adam Smith
PS: Good afternoon Mr. Moderator...

I wish they did. I'm under the impression that most "Japanese" autos sold in north America are not made in Japan. As far as I know there are zero Toyotas for the American market made in Japan, unless you import one yourself. Most Hondas sold here are made here, the exception being some of the higher end cars and some hybrids. It seems that the Japanese company that sells the most cars actually made in Japan is Nissan, but even most of those are not truly made in Japan anymore.

I've only noticed this because I think cars made in Japan had (have?) some of the highest quality control, rivaled only by those made in Germany. My wife used to have a 1989 Acura Legend. It was made in Japan and it was great. Very comparable to our 1990 BMW E34 when it came to quality. I wish we still had that car.

I worked on a first generation Honda Insight not too long ago and it was made in Japan. It was a 2001 or 2002 model. It was an interesting little car that was somewhat revolutionary for it's time. Truly a piece of automotive history. I did a head gasket on it and now it runs like a top even though it has 345,000 miles on it. Interesting little car. If you ever play with one be careful working with the 168vdc battery pack in the back. (You might want to keep one hand in your pocket or wear rubber gloves).