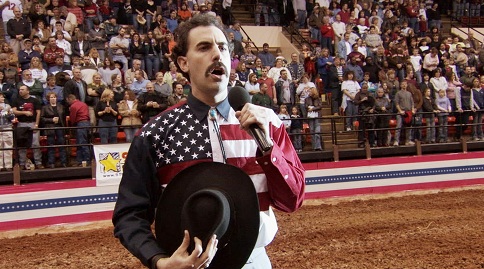 I was quite a bit younger when the movie Borat* starring comedian Sasha Cohen, came out, even when I finally watched it on DVD. At that age, I was a bit too naive to understand what the actor was doing with that movie.

Just the guy with the funny Eastern European accent trying to be an American and asking stupid questions ("Does this car come with chick magnet?") was funny enough for me. Some of the jokes are still funny now. The Americans that character Borat interacted with were helpful and hospitable. To me, it was very much an example of what VDare has often stated, of being anti immigration (at least massive amounts of it) without being anti immigrant.

From watching youtube clips much later, I understand now that Sasha Cohen was using the movie to make fun of Americans and Americans' politics. It helped him that those he interacted with were too trusting, drunk in one case I recall, and asking stupid questions** usually elicits stupid answers. Mr. Cohen took real advantage of trusting people to make Borat funny, and to make Americans look stupid.

Sasha Cohen let Americans speak freely, as they were still used to doing in 2006, and there were no Americans calling for he to not be able to do the same with his movie. Mr. Cohen has apparently changed his mind about free speech: 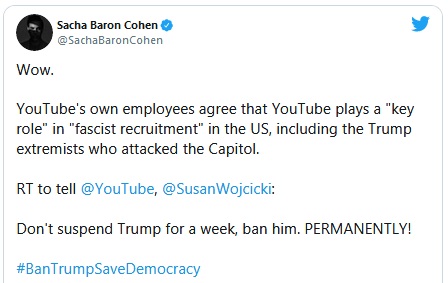 That's how the ctrl-left rolls. Since the 1960s, the left has been pro-free-speech and any other Constitutional rights when it helps them... not get thrown in jail, get off on technicalities when they do, and be able to spout off any manner of inciting anti-American garbage. Conservative Americans may have been quite triggered, had that been a word then, by much of this, but they understand the whole concept of free speech. The ctrl-left only pretends to when it's of help to them.

They don't need this help nowadays, as they have taken over all the institutions of American society. This idiot Borat is part of this new establishment. I wonder how long it will take Conservative patriotic (normally white male) Americans to understand that we are the counter-culture now. We're not going to get any breaks from that old US Constitution though, sorry.

* The full title is Borat: Cultural Learnings of America for Make Benefit Glorious Nation of Kazakhstan. Yeah, that's funny, and there are still some lines from it that I borrow today for this very blog.

** In one of Mr. Steve Sailer's posts on Sasha Cohen, Borat is Back, he has a clip of Cohen, in his character "Ali G", interviewing Donald Trump. It is stupid enough for Mr. Trump to have terminated the "interview" after a minute and a half after being very patient and humoring the guy. "Humoring" was necessary, as I didn't find Ali G one bit humorous.

WJ
PS My favorite memory of Borat is when he tried his act on a person in NYC as a whim. That person beat him like a rug. I wish I could find the link. Probably the early 06 timeframe. Cohen is a punk and if you pay to see his movies you are giving money to a person that hates and mocks you.
Ganderson
PS. OT, And probably more apropos to one of Sailer’s golf posts, but Justin Thomas is getting the two minutes’ hate for calling HIMSELF a faggot- apparently he left a putt short and, as Bob Dylan would say “muttered something underneath his breath”, like say, “ faggot”; and has been dropped by at least Polo, not that the ‘mos are lining up to wear Justin Thomas branded active wear, and is being forced to go to re-education camp. Maybe the camp was ‘his’ decision.

Golfer’s are now on notice that such time honored golf chirps such as “your husband play golf, too?” And. “ you get your putter caught in your skirt? “ are now verboten.
The Alarmist
PS

I saw this with my then Russian girlfriend and a gaggle of her Russian friends. I think they were laughing more at the digs at Khazaks, but Borat did find a few cringe-worthy Americans who also gave them some laughs.
Moderator
PS: Citizen Winston Smith, so our Dear Leader drew a pretty good crowd ...

I'm pleased for our Dear Leader.
Smith, Winston Smith
PS The America you grew up in is over so deal with it.
An Iron Curtain constructed by Big Tech Bolsheviks and their owned toadies in the fedgov leviathan went up yesterday as the most popular preezy of the steezy evarz had a HUGE crowd of 25,000...under orders.
We're all South Africans now.
Mr. Anon
PS SBC is a turd. A big reeking turd.
Adam Smith
PS: Good evening Robert, Mr. Moderator...

People used to be able to get into fist fights without getting charged with assault or battery or such. I'm sure you still can, but don't let the cops get involved. Cops used to break up a fight, or perhaps let people fight it out, but if it was a "fair fight" no one was going to jail. Oh how things have changed.

I don't think any state has a fighting words statute per se. In Georgia and Texas it's covered under "disorderly conduct". It's likely similar elsewhere. Fighting words are a categorical exception, along with obscenity and child pornography, to the first amendment discovered by the courts. Fighting words are, as first defined by the Supreme Court in Chaplinsky v New Hampshire, 315 U.S. 568 (1942), words which "by their very utterance, inflict injury or tend to incite an immediate breach of the peace. It has been well observed that such utterances are no essential part of any exposition of ideas, and are of such slight social value as a step to truth that any benefit that may be derived from them is clearly outweighed by the social interest in order and morality." (You probably knew this.)

I really like some of Sasha Cohen's work. I liked Borat. I saw the sequel, it's alright but not as good. I also like "Who is America". I think Cohen is the worst sort of hypocrite to come out against free speech after building his career on pushing free speech to some limits. Some of his antics have cost people their jobs or prospective employment. One example is the drunken frat boys in the Winnebago. He has no plans on sacrificing his own free speech, just the speech of those he disagrees with and those less powerful than he. He's being disgraceful.

☮
Moderator
PS: Fights aren't what they used to be, Robert. Now, each side starts streaming video with his phone and words ensue. ;-}

I think the solution of a jury deciding what are fighting words in an individual case is reasonable, as provocation can't be always someone's fist or other weapon. (For instance, if a guy has his finger 6" from you eye, that surely is provocation.)

However, I'd hate for that to be policy, as what if the Biden/Cameltoe administration or Congress made up a list of 50,000 fighting words and phrases. I can see them taking a liking to that sort of thing.

I agree that lap dancing doesn't constitute free speech, though if it is legal, she should be able to whisper whatever sweet nothings she wants, errr, gets her the most dollar bills.
Robert
PS: Back in, I think, the mid seventies, when they first tried to make burning the US Flag illegal (even though it was the mandated way to dispose of a flag), it was ruled (correctly) to be a free speech issue. (Lap dancing to be similarly protected is a farce.)

When some protestors got beat up (in I think Indiana) the judge ruled that flag-burning constituted "fighting words" and fined everybody on both sides $25.00.

A good solution to some of these free speech issues, but I don't think any states still have fighting words laws.