The post title is the title of former Congressman Ron Paul's latest weekly edition of his Liberty Report. I thank a friend for sending me a link, though I should be watching this every week for a number of reasons:

2) I can get some more material for this site.

3) It is a breath of truthful fresh air in an atmosphere of lies. It is so relaxing to watch these videos, and I can spare 1/2 hour a week for this guy.

Ron Paul's co-host Dan McAdams doesn't do as much of the talking as Dr. Paul, but he think he does more of the "leg-work", searching for examples to illustrate the points, etc. He had a bunch of comparisons of Lyin' Press narrative output, errr, reporting from just before and just after the Zhou Bai Dien inauguration. This is my favorite, from the smooth, polite .... you're getting sleeeepy ... folks at NPR: 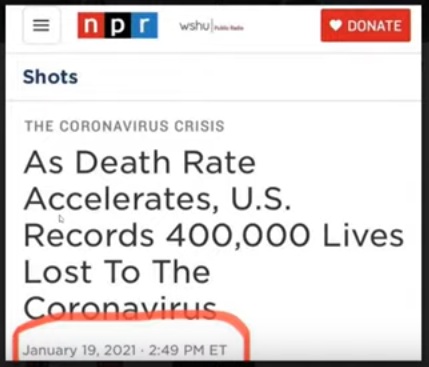 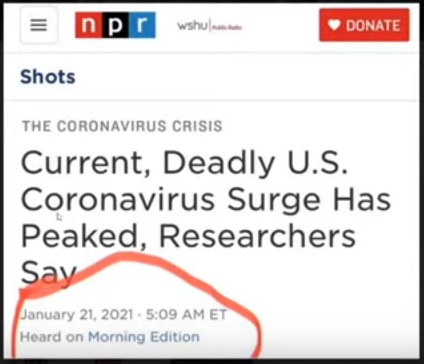 Yeah, the story seems to have changed over a couple of days there around mid/late January*. We used to worry, but it's all over now...

I've said good and bad things about Ron Unz, creator and proprietor of the unz.com site, but of the good, the most important is that Mr. Unz will host the words/videos of guys like Dr. Paul. He had hosted Ron Paul's Liberty Report videos before, but they are not on there now. Because I trust Ron Unz on this sort of thing, this is NOT because he wants to "cancel" the guy. It may be that he's boycotting youtube at this point and will put bitchute videos of the Liberty Report on at some point. Mr. Unz still has Dr. Paul's columns here.


* For you higher math dudes - I mean if you can read our masthead... - when you have an "acceleration", as in an increasing slope, just before a peak, doesn't that mean there's going to be a discontinuity? I hate Illinois Nazis discontinuities! I think the discontinuity was the Bai Dien inauguration.

Moderator
PS: Alarmist, sure these epidemiologists are math whizzes. It's just the garbage they put into the models that are the problem. Otherwise, the math models are perfect, I'm sure.

Mr. Blanc, I've noted your predictions, along with some others on unz with the same thing.. It's a tough call for them. They WANT to ruin the country, but they don't want to be thrown out of office for doing it. What to do, what to do?
MBlanc46
PS The Plague Panic winding down post-JAN 20 was my prediction. They’ve vanquished the Bad Orange Man, and however much some Dem pols would love to dictate our every movement, the Dems at the top must know that they’d better get the economy moving tout de suite, or they might start getting blamed for the damage.
The Alarmist
PS

Mr. Moderator said “... - when you have an "acceleration", as in an increasing slope, just before a peak, doesn't that mean there's going to be a discontinuity?”


You have to think like a theoretical or Oxford epidemiologist and assume the curve will go asymptotic to infinity.