It's not that Peak Stupidity is in the throes of a period of Political Correctness here. Polack jokes have been fun. I didn't really get the "Polacks are stupid" premise to begin with, though, having never really known any Polish people besides one roommate long ago, and he was bright enough. (I don't remember asking him to screw in a light bulb, so I'm not completely sure about him.)

No, our request here for the cessation of these jokes is simply based on embarrassment. Who are Americans and other English speakers to make jokes about any foreigners now, with the stupidity going on that can be made fun of so easily by others? Even Volvo of Sweden, a PC heaven, has seen fit to make fun of the English-speaking readers of their ad, yet leave the Polacks alone:


At least I think this was making fun of us, right? 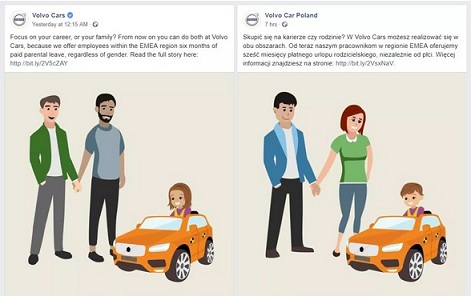 The American/Euro joke in this case was about our Genderbender nonsense, spread far and wide as a most important issue. Note that the English language ad has an interracial gay couple with a daughter, adopted I guess, but who knows, while the Polish ad shows a normal couple (although the guy does look a little too swarthy for a Polack).

This is an ad not for the car itself, but for employment. The virtue signaling in it is likely there to sell cars too though. If they think this ad will help sell cars to any normal Americans, or make them more likely to consider Volvo for employment*, well, no, surely they are joking with us. I don't see a Polish joke in the Polish ad's graphic.


Close-up of the English text:

It's now time for the world to make fun of Americans, I guess. Peak Stupidity will refrain from Polish jokes in the hopes that the Polacks won't notice us and the stupidity here. Wetback, Negro, Wop, Jap, Chink, Kike, and Canuck jokes are still strongly encouraged.


* I suppose even for normal people, if the wife is about to pop out a few kids in the next few years, one could take advantage of this offer. Otherwise, this ad just screams "HR ladies! Ahhhhhh!"

Back in the day, Italian jokes as well as Polish jokes were popular, and here's one that combines the two.

A football game between a team of Italians and a team of Poles was a scoreless tie until the referee blew the whistle for the two minute warning. The Poles thought it was the end of the game and walked off the field.

Three plays later, the Italians scored.
Moderator
PS: Thank you all for the good jokes!

Robert, that snail one didn't work with my kid. I screwed up the delivery. Gotta work on it a bit.
Adam Smith
PS: Pollack jokes, eh?

How about a few jokes, in no particular order...

How do you get a one armed Pollack out of a tree? Wave.

How do you get a Black! man out of a tree? Cut the rope.

Why do American football teams play on artificial turf?
To keep the cheerleaders from grazing.

How many Jews can you fit in a Volkswagen Beetle?
42. Two in the front, two in the back and 38 in the ashtray.

How do we know that Adam and Eve were white?
You ever try to take a rib from a Black! man?

Once upon a time, there was a gentleman who wanted to be a cop. One day he went to see the local sheriff to see if he could get a job as a deputy. The sheriff invited the guy into his office to sit down for an interview. Everything was going well and the two seemed to be hitting it off. After a little while the sheriff takes his gun and slides it across his desk to the gentleman and says “I need you to go me kill six niggers and a rabbit." Slightly confused, the gentleman asks “Why the rabbit?” To which the sheriff replied “I love your attitude, you're hired.”

People keep saying that Americans are stupid, but I disagree. Anyone that builds a city 10 meters below sea level, in a hurricane zone, and fills it with niggers is a fucking genius!

How do you keep the Blacks! out of the watermelon patch in the back yard? Hang a couple in the front yard.

How many environmentalists does it take to change a lightbulb?

One to write the lightbulb a letter requesting that it change. Four to circulate online petitions. One to file a lawsuit demanding it change. One to send the lightbulb lovingkindness™, knowing that this is the only way real change occurs. One to accept the lightbulb precisely the way it is, clear in the knowledge that to not accept another is to do great harm to oneself. One to write a book about how and why the lightbulb needs to change. And finally one to smash the fucking lightbulb, because we all know it's never going to change.

A young Black! man walked into the local welfare office, marched straight up to the counter and said, "Hi, I'm tired of handouts, I want a job."

The man behind the counter replied, "Your timing is amazing. We've just got a listing from a very wealthy man who wants a chauffeur/bodyguard for his nympho daughter. You'll have to drive around in a big white Mercedes, but the suits, shirts, and ties are provided. Because of the long hours of this job, meals will also be provided and you will also be required to escort the young lady on her overseas holidays. The salary package is $200,000 a year."

The nigger said, "Ah c'mon, you're bullshitting me!"
The man behind the counter said, "Well, you started it."

One more note- in the movie District Nine, directed by Afrikaner Neil Blomkamp, the 'hero' as it was was named Van der Merwe.
Ganderson
PS

And then there are the jokes about Van der Merwe the Afrikaner:

Van der Merwe was watching a rugby test between the Springboks and the All Blacks at Loftus Versfeld stadium in Pretoria. In the packed stadium, there was only one empty seat - next to Van der Merwe.

"Who does that seat belong to?" asked his neighbor.
"It's for my wife."
"But why isn't she here?"
"She died."
"So why didn't you give the ticket to one of your friends?"
"They've all gone to the funeral."

And in the upper Midwest, Sven and Ole jokes:

Ole and Lena are driving down the road one day when she sees a baby skunk by the side of the road, next to its dead mama.
"Stop, Ole!" she cries.
Lena jumps out, picks up the baby skunk.
"Ole, what do I do with him?"
Ole says, "well, you could put him under your dress."
"But Ole, what about the smell?"
"Oh, he'll get used to it"
Adam Smith
PS: Good afternoon all...

Mr. Moderator, about those six legs, I think that version of the jokes goes something like...

A: Three black guys trying to catch an elevator.

☮
MBlanc46
PS Polish jokes were big in the Chicago area when I was in junior high, c. 1959. There are a lot of people of Polish descent around here. The last I heard, Chicago is still the second largest Polish-speaking city in the world. After Warsaw. So, it made sense. I don’t know what the average IQ of Poles is, but they aren’t associated with brainy jobs. Your Polish buddy’s father wasn’t an accountant, he was a construction laborer. But the jokes weren’t really about Poles. You could stick in just about any ethnicity. Except maybe Jews or Negroes. Also big for a while in those days were grape jokes. Q What’s purple and weighs two tons? A Moby Grape. Or Q What’s purple and has a soft top? A A convertible grape. I often think that the perfect existence, at least in those days, was being an eleven or twelve year old boy. Your parents supported you, and except for some chores, you didn’t have any responsibilities. And everything was funny.
Moderator
PS: Robert, I was befuddled by the six legs. Otherwise, yes, I did know this one. I like your Irish one too, never heard that before! I'll tell the snail one to my 9 y/o. He'll like that.

Mr. Alarmist, the original tweet I saw was made to show the difference between the English-language ad and the Polish one. I had not known what EMEA is, so I'll put a disclaimer on this post. Thank you. Either way, the Poles aren't getting the same in-your-face wokeness as the English speakers. (I guess Volvo assumes lots of people in the Middle East, Africa, and, of course, Europe, speak English I suppose. Maybe they are just virtue signaling in English only.) Screw 'em. I'm not in the market for a Yuppie-Mobile anyway.
The Alarmist
PS

Well, EMEA is Europe, Middle East and Africa, so I’m not really sure who the tweet is aimed at ... I imagine it won’t win them the goodwill of many Muslim employees.

I won’t give you the setup, because the joke is definitely not PC, but the two-part punchline is ...

Part of my fondness for the elevator joke comes from where I first heard it. I was sitting next to a very large and mean looking black man whom I did not know, at a rather seedy bar late at night. He told me this joke, but did not use the word 'black'.
Robert
PS: First, Mr. Moderator, given your question, I assume you know the answer, but here goes: "Three blacks running for the elevator"

Second, because I always liked a good joke, and most of them are now forbidden in most places:

This one has both religion and nationality:

It takes place during 'the troubles'.

An American business man is on a trip to Ireland, but he finishes
his business early, and decides to tour some of the distilleries.
The third day, night is falling and he approaches an intersection
only to have a masked gunman stop the car. "Be ye Catholic, or be
ye Protestant?" The business man is a bit befuddles by now, so he
can't remember what part of Ireland he is in. What should he say?
Being a quick thinker, he replies "Neither. I'm a Jew." "Sure and
begorrah then, I must be the luckiest Palestinian in Ireland!"

What's brown on the outside and white on the inside and sticky?
(answer after the next joke, because I did not find this one on the interwebs, only stuff about female problems.)

One new years eve, a man hears a knock on the door as midnight
approaches. He goes to the door but sees no one there. Looking
down, he spies a snail on the door-stoop, so he bends down and
throws the snail as hard as he can.

Next new years eve, just about the same time, another knock at
the door. He goes to the door, and the snail shouts, "What did
you do that for?"


Answer: A stick.
Moderator
PS: What DOES have 6 legs and goes hoe de doe, hoe de doe, Robert? (It's some kind of elevator joke?)
Robert
PS: Not a Pollack joke, but:

How many mice does it take to screw in a light bulb?

The version I knew:
https://www.nedmartin.org/v3/amused/lightbulb-mice


OK, I can't resist. Ethnic jokes (and dead baby jokes) were some of my favorites, but we can't tell them now. This one is probably more forbidden then some: