Just Another Serf on the Imperial Workforce 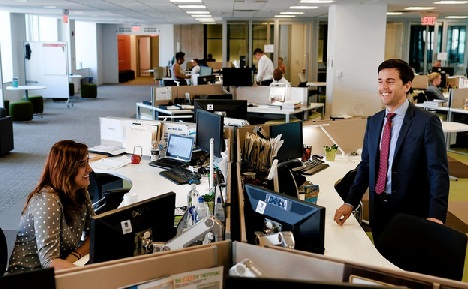 Unz writer (or at least that's one of his outlets) C.J. Hopkins has another great column up, called The (New Normal) War on Domestic Terror. This guy was said by some commenters to be a lefty, at least before the Kung Flu PanicFest woke him up, and he does insist on this "GloboCap" term that irks me a bit. However, he's right on the money here, and he may as well be Ron Paul. People say the ideas of the far left and far right meet around the other side. I don't think so - this guy is just getting a clue is all.

Speaking of getting or already having a clue, a commenter on unz whose comments I've really liked goes by the handle Just another Serf. This comment of his, under the C.J. Hopkins article in question, is a great concise vignette, if you will, of the average low-level Imperial Washington FS cadre that we Conservative Domestic Terrorists are dealing with in the millions.

Here is Just another Serf's comment in its entirety:

I really appreciate Unz and the authors assembled here (not to mention, most of the commenters). It would be rough to have no reliable access to narratives countering this grotesque gaslighting we are being relentlessly subjected to.

Imagine being one of these creatures “employed” in one or another of these federal or media agencies tasked with fighting the war on domestic terrorism. At some level, you know you are involved in a repulsive effort to destroy what are your fellow citizens. But you are living in the enchanted city, even if it’s just a quickly constructed townhouse in a vaguely affluent Maryland or Virginia suburb. Maybe you’ve got some low level clearance to compliment your GS level. You’ve got an electronic badge that will get you into some floors of a few agency buildings. That late model BMW is your pride and joy. You’re paid well enough to indulge in restaurant meals. Although, it’s takeout only these days. As I imagine a majority of these drones are now female, shopping for clothing and dressing for work (which now includes coordinating your masks with your outfit), occupies a large portion of their mental processes.

You’ve never produced a thing of real value in your life. And now your sham career is increasingly about harming those rubes living outside the emerald city. Well, not so much harming them, but grinding them into bloody pulps.

It must be hard facing that everyday, for whatever number of these workers retain a shadow of integrity or a vague memory of a distant America.

Oh, and the picture above comes from an article with the title below, from the Wall Street Journal:

MBlanc46
PS I seriously doubt that they consider us their fellow citizens. To them, we are unspeakably evil, monsters who want to desecrate and destroy everything that they hold dear. They want to grind us into dust. They experience a thrill when they grind us into dust. Then they are rewarded for grinding us into dust.
Dieter Kief
PS I knew there was something wrong and was too impatient. Thanks. I could / should have mentioned both songs, that would have been better all together. - ahh - now it dawns on me: The bloggers are the circlers - that was the thought that I had but - not clear enough to pin it down. - Haha - the productivity of mistakes is wi(l)dely underestimated.
- Thanks Rex Little!
Rex Little
PS Correction for Dieter--wrong Joni Mitchell song. The quote comes from "Big Yellow Taxi", not "Circle Game." (But seeing Circle Game mentioned prompts me to bring it up on YouTube; it's one of my favorite songs.)

Dieter Kief
PS Mr. Moderator - I've been up north in Washington state at the coast once - it made quite an impression on me and did like it!

As far as novels go: The idea is, that they are more dense the reality and thus a way to encounter it in a compressed form.

One of the big differences to blogs for example is: Ideally in novels there are less repetitions. - Just think of the thousands of times bloggers who are productive (and maybe write on a daily basis) repeat themselves. - Blogs are in themselves a lack of form. Novels (I mean: Great novels of course!) beat them in that regard (they lack in a lot of other regards, I admit that - - - isn't it always like that - you can't gain without losing ("we don't know what we've got till it's gone" (Circle Game/ Ms.Mitchell).

This world we're in here is a - tricky place (Goethe said that: The world is stuffed with - öhh - remarkablenesses ("Merkwürdischkeite")!
Adam Smith
PS: Good afternoon everyone...

"It must be hard facing that everyday, for whatever number of these workers retain a shadow of integrity or a vague memory of a distant America."

It seems to me that Just Another Serf is projecting his kindness and honesty onto people who have neither.

Of course, the people of "government" cannot help but harm and destroy.** It's in their nature. It's who they are. It's what they do. Bureaucrats suffer from the curse of Greyface*** and their only purpose is to harm and steal from creative, productive people. Bureaucrats serve no useful purpose. They are parasites. Bureaucrats (and bureaucracy) are a blight on the earth and we would all be better off without them.

* Many postal and parks workers excepted.

** Perhaps the Gnostics were right.(?)

☮
Moderator
PS: Dieter, I haven't read many novels because it seems like there's too much reality to be aware of first. However, I'll write a short review on that Guterson book because, well, I read it. I'll say this: This guy really knows that portion of Washington State well. He named an exact place I've been in there.

If you don't mind things never drying the hell out (except for 3-4 summer months) and gloomy clouds and hardly any daylight for 4 months, but love the tall trees and fresh air, that area is pretty cool.
Dieter Kief
PS Mr. Mod. - let me have a look at private insurance firms and tell you: Bureaucracies. - And we all agree - not always the best, I'd assume. Modern societies develop this kind of - structures, because they obviously need them, so far.

(Not only did you write, that you've read the one of the two great Guterson-novels (the other one is Ed King, just in case that I did not mention it, about Silicon Valley Big Men and - their (fake, somehow...) therapist), you also - looked forward to writing about your thoughts and all. - I found both things interesting, I have to say).
The Alarmist
PS

In the old days, Uncle had difficulty recruiting young talent because the pay was shit. I came out the Air Force with two offers, one in DC with a start in the $20s and one in a bank in NYC in the $70s plus a $10k signing bonus. Doesn’t sound like much now, but in those days that was seious money.

Even now, SES level fed employees top out in the $200s. I used to joke at how my civvy salary was multiples of that of my govt counterparts, and it still is except for those in the party elites’ good graces. They spend a couple years at some upper post in the OCC or SEC or CFTC getting a couple hundred grand, then move to banking where they get $5 million. Then a new administration comes in, taps them for a couple more years, and then bank to the big money on the street. Lather, rinse, repeat.
Moderator
PS: Thanks for the suggestions, Dieter . (I read your suggested novel "Our Lady of the Forest", BTW.)

I have a different view of who should be doing airline security, taxes (whole 'nother subject, Dieter! Don't get me started, haha.), and medical testing, etc. On the MAX, the problem was with bureaucracies both within Boeing and in the FAA.
Dieter Kief
PS Books by Fromm worth reading are: The Art of Loving; The Sane society; To Have or to Be; Anatomy of Human Destructiveness; Fairytales, Myths and Dreams.
You need bureaucracies to steer all kinds of stuff - from taxes to medicine, - airplane security (remember the MAX story?)... I'm a bit lost - this obvious, isn't it, Mr. Moderator?
Moderator
PS: Rex, I think I had a blog post on this (will look later), I was comparing the US Gov't to the Chinese government, telling a guy I was sitting next to on a plane that things were opposite. The Chinese have a history of their smart people - the ones that could read and write - not so damn easy with that language - going into government, while the US has the dumb ones going into government.

That guy mentioned that he worked for the US government after that. OK, the National Park Service - I told him that was "different".

BTW, some of the masks are being used as advertising billboards it seems. I told you readers to invest in cloth face masks a year ago in the Peak Stupidity financial newsletter, oh, and the floor sticker sector.
Moderator
PS: Mr. Kief, I don't know if Mr. Serf means that they aren't needed for their particular bureaucracies to function. Are these bureaucracies necessary for the rest of us, though? Which particular book by Erich Fromm do you recommend?
Rex Little
PS ". . .coordinating your masks with your outfit"--my wife does that for a trip to the grocery store. She just paid $10 for a mask that's no different from the ones the stores hand out for free, except that it's got a flower pattern on it that perfectly matches one of her pairs of pants.

"US Government Struggles to Hire Smart Young People"--not just the US government. My wife's daughter (age 45) works for the county, and she says the millenials they've hired in her office are hopelessly incompetent.
Dieter Kief
PS Erich Fromm - The Sane Society Fromm talked about the fact that it comes at an emotional cost to be a little wheel in corporate America (or the corporate GB etc.). He says just about the same thing. Oh - and Max Weber said it. The sociologist spoke of the "iron cage of obedience", modern societies are made of.

Ehh - what's off in JaS's comment is the idea, that people in modern offices necessarily don't do any service to society. They do, they do. - Cf. - Max Weber. Modernity can't do without bureaucracies because they do add steering power to complex entities (=modern states) which could not exist without them. - It's here as it is always: The sound is a matter of the dosage.