More on the Tubwoman Twenty 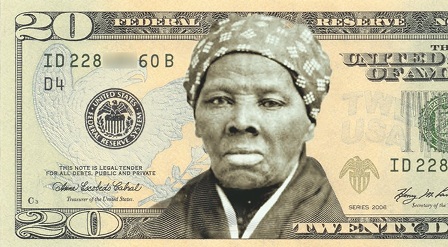 Yesterday Peak Stupidity worried about one aspect of this pending black currency in the post Tubmania and the Cashless Economy. I think that most Americans do not like to fight any of these small battles, so they won't do anything that might cause a scene or a name-calling to try to marginalize these new twenty dollar bills. This change is likely to push the cash-paying hold-outs toward using their plastic cards, so as not to get any of this currency that is embarrassing and degrading to us.

As we discussed in these pages ["in these pages", really? Who TF do you think you are, William Safire?!- Ed] long ago, we at Peak Stupidity have chosen some of these small hills, not to die on, but to not have any beer and chips during the Super Bowl at least. I can tell you right now, that I'll not be changing my method of payment to debit at the store or restaurant registers. What I will do is to use a lot of tens.

Being an Andy Jackson acolyte , I supposed I should be no fan of Alexander Hamilton, a acolyte of this big government and big banking proponent. Still, he beats the living hell out of Harriett Tubman though (no, not literally he didn't. Don't cancel him, please!)* Really, I do not seem to use many tens. The fiver is the new one, and the twenty has become the new five, just in a couple of decades, it seems to me. Benjamins are still a bunch of trouble to use and still cause a little worry about losing a folded up stack of 5 of them or so. I'm not a fan of US Grant either, but those fifties could start coming in handy more. I'll give the lady a fifty for an $18 Big Mac meal - no, I don't live in NY City, but I'm just thinking ahead about 5 years - and just politely say "I need tens, please."

Oh, sure, at some point it will get to the nitty gritty, with some big sassy black lady, looking a lot like the $20 bills herself, going "what's the matter? You got something against this money?!" One could make a lame excuse at that point, or one could just stand up, and yeah, probably not end up going shopping there again. One may be surprised, though, by some support from others, but then again, I don't see much courage on a day-to-day basis.

I've thought about stocking up on Jacksons. I still have plenty of incandescent light bulbs from '10, which are holding up better than I had thought. These bills have a good shelf life, but it'll get weird in about 5 -10 years at most, when most young people won't recognize them. I noticed that when the larger portrait of President Jackson was put on the twenties, it didn't take but 5 years before the older smaller-portrait bills looked antiquated to me, as if they came from breaking into someone's numismatic collection due to a cash flow problem. That's not a long-term solution.

With my great disdain for feminism, one our most destructive forms of stupidity, I was pleased back in the day with the way Susan B. Anthony was marginalized all to hell by us vending machine aficionados. It's one thing that people would request bills over the coins at the bank. That wasn't all because of the feminist on the coin, but also because $1 dollar coins are strange to most Americans (it's been a WHILE). However, when one would put a fiver into the machine for a Coke and get 4 of those coins, he had to dispense with those somehow. By using them in vending machines (right back atcha', slick!) or bringing them to the bank, we put the kibosh on that whole idea of pushing the feminism via currency. I don't know how exactly it went down, but when's the last time you saw one of those abominable dollar Anthony's?

It'll take a lot more courage to do the same for the Tubwomans when the term racist will be thrown at us, rather than just "I keep losing those coins, ya know..." I'm up for it, though. How 'bout y'all?

* Hell, they both lived in the early 19th century, and it was a small country, so maybe he did beat her occasionally.


Robert
PS: Mr. Moderator, when I saw the first picture, I just assumed that it might be a meme thing or whatever it is the cool kids call that stuff. But then, the second picture.

Well, the Intertubes would never lie to me. So, that must be the real deal. Hence my comment.

But I also am too lazy and uninterested to investigate further. Whatever they say today, can change tomorrow.
Moderator
PS: Oops, Robert, never mind that last part. I didn't realize these were the same pics. I do have a different bill picture for the next short post on this.
Moderator
PS: Robert, I think this photo is a joke or meme or whatever. However, I don't know which one is the actual proposed picture and design. I suppose I could find out, but I don't care enough. Perhaps the one from the previous post on the subject (with the Jackson bill above it) is the one proposed (I dunno).
Robert
PS: Aside from all the other issues, that is one ugly photo --- why not use a dignified engraving like all the rest? But, perhaps that is the point. You WILL submit.
Moderator
PS: I see your $480 Coca~Cola, Alarmist and raise you an $1,895 personal sized bottle of Aunt Jemima pancake syrup. Let's see, that's 94 Tubwomans, one Parks, and five Jacksons (the ones with Jesse on them).
MBlanc46
PS This will really stick it right in our faces. FU, Whitey! There will still be a lot a Jacksons in circulation, and I’ll break the damned Negroids as quickly as possible. Use one for a $.50 purchase, etc. So far as the degradation of the currency goes, with the inflation that might well follow the Bidenreich spending spree, twenties might well become the new fivers.
The Alarmist
PS

I’ve lived in a couple countries wher $1 of the local currency was denominated in the thousands. Given the recent increase in the US money supply, one can only wonder how triggered one might be laying out dozens of Tubmans to buy a can of Coke®️.
Rex Little
PS Five of them (half-sisters, actually), but none of them lives here. One is in England, the rest in Thailand where they all were born and raised.

I've never met any of them, but if they're anything like her. . . be careful what you wish for. Long, angry, barely coherent rants aren't nearly as much fun to listen to when you've heard everything in them twenty times before.
Moderator
PS: She got a sister, Rex?
Rex Little
PS It'll be interesting to see what my wife does when the Tubman bills are in general circulation. She's Asian, and her attitude toward blacks makes the commenters over at Unz sound like SJWs. The other day there was a closeup of the Tubman bill on TV, and that set her off on a half-hour tirade.