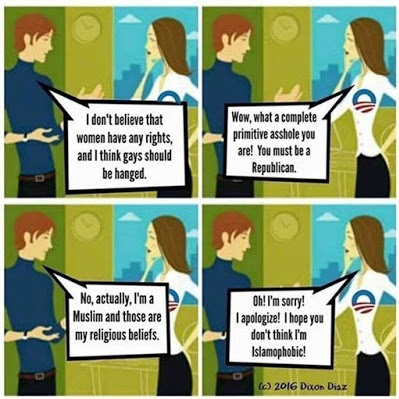 I saw this cartoon about the year it says it was written on the bottom right, '16. A while later, I spent 1/2 hour, maybe more, trying to search for it to put up on Peak Stupidity. It's hard to search for things like this if you don't know some details of the wording. I just had the general idea of what I was looking for in my head. Anyway, I could not find it then. A commenter with the handle Harry Baldwin* embedded the cartoon on unz today, and I am so happy to be reunited with it.

I could write more about the intersectionality bit that Steve Sailer discusses often. I spent too much time with family stuff (nothing wrong with that) and too much commenting on unz (yeah, that's a problem, "Hello, my name is REDACTED, and I am an unz commenter." OK, Step 1 down, 11 more to go) today, so I'll just let the cartoon speak for itself. Nice job, Dixon Diaz!

* Mr. Baldwin suggested that there was probably an element of censorship to my not ever being able to find this cartoon, also.

I’ve decided I’m going to make yellow cloth stars that kind of look like what the MSM use as a Coronavirus picture, with the words “No Vaxx” on them. In Europe, this is the kind of thing for which you can be prosecuted and jailed if they feel you are trivialising the Holocaust. I’m going to print posters showing people wearing them with the caption, “Do you really want to put me in a camp because of my beliefs?”

Some former German judge lady said anti-vaxxers and “COVID-deniers” should be put in camps (yes, she used that term), and in fact, persons who repeatedly violate COVID restrictions are indeed being put in camps.