It's freezin' down in Texas .. 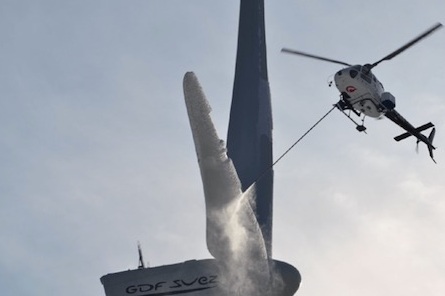 It doesn't matter what blues song I start out with in my head, this one being Stevie Ray Vaughn's Texas Flood, it ends up turning into the 3rd line of Cream's Down to the Crossroads, a classic white version of the famous blues song, and continuing from there.

With a couple of exceptions and a streak of posts about our main squeeze Pippi Longstocking , errr, Greta Thunberg, Peak Stupidity pretty much got off our Global Climate Stupidity topic 2 1/2 years back. It's not that we've changed our minds. There was just not much more to write, and I really though the ctrl-left had left this hobbyhorse behind to pursue other more lucrative stupidities. I'm not so sure about it, though.

The eyes of the country are on Texas (but let's not ignore Louisiana either), as this Global Warming-caused deep freeze has paralyzed the place with cold and power outages. I guess not all the green sources work so well when it's all white out.* We wish the best for the poor Texans freezing their asses and hope there will be the right lessons learned from this hopefully short-term trouble. From the great blues player/singer Stevie Ray Vaughn, lost to us way back in the summer of 1990 in that helicopter crash, and his band Double Trouble here's Texas Flood. This live performance was at the El Mocambo Club in Toronto, Ontario.

* I haven't read that many details, but I was wondering whether the wind turbines froze up while in resting position due to lack of wind, or did they actually freeze up all like this even when in motion? I also wonder whether ice flies off the blades from inertial forces as it does from the outer regions of airplane propellers (the inner portions are heated up electrically, if at all). Let's see ac = ω2r. These things spin at something like 10 - 20 rpm (just calculated from tip speeds and blade length of some typical models). That's ~ 2 rad/s2 (150 ft) = 600 ft/s2. For a small aircraft prop, you've got about 2,500 rpm and a 2 ft radius to the outer edge of the portion that needs de/anti-icing. That's 262 rad/s2 (2ft) = 137,000 ft/s2**! There's no comparison. If the inner portions of aircraft propellers can ice up, then those wind turbine blades could ice up easily at their fastest speeds.

** This inertial acceleration seems so HUGE, but the math is simple. Please let me know if I screwed it up, ASAP.
MBlanc46
PS MOD: My understanding is that they squeezed the liquid out of the Canned Heat, perhaps mixed it with something, then drank it. It was methanol and, therefore, toxic. I recall reading a substantial account of Canned Heat use, but I can’t turn it up.
Moderator
PS: Mr. Blanc, yeah, I guess "math" sounds as stupid to the Brits as "maths" does to us. I'd just never heard it spoken and never read it until fairly recently, since I've been more of a curmudgeon.

Thank you for the background on Tommy (and Robert) Johnson. What do you mean about the Sterno, he sniffed it?
MBlanc46
PS MOD: The association of Robert Johnson’s Cross Road Blues and the selling one’s soul to the Devil for musical proficiency is a recent innovation. I know of no early account that makes that connection. It’s all Hollywood. The Johnson with whom the story is historically associated is Tommy Johnson, of Crystal Springs. He apparently actually told the story of meeting a mysterious stranger at a crossroads at midnight, handing his guitar to the stranger, who tuned it, after which Johnson was a guitar master. Tommy Johnson was a much more popular musician than Robert Johnson, who made successful recordings for Victor in the late 1920s. He was the originator of Big Road Blues and Canned Heat Blues. He apparently was addicted to Canned Heat (Sterno), which hastened his death in 1956, just before the blues revival of the 1960. A lot of rockers covered his songs, but he didn’t have the cachet of Robert Johnson, so the marketing boys swiped his story and attached it to Robert.
MBlanc46
PS MOD: Yes, “maths” is the British usage. Which is why you get it from Derbyshire. And probably Peter Brimelow. The Brits probably dislike “math” as much as you dislike “maths”.
Fundamental Transformation
PS Conductor AOC will arrive soon on the NYC to Hawaii high speed rail powered by Solyndra solar panels but first esteemed party member comrade kommissar Hanoi Heinz Kerry will swoop by in his unicorn flatulence powered Wonder Woman jet to thaw out the "historic" turbines of good feelz energy.
Maybe we could burn all the participation trophies for fuel as part of the Great Leap Forward.
The Alarmist
PS

I was to busy resisting my spell checker suggestion to use tonnes and forgot the Carl Sagan bit. Good thing I didn’t choose to check your maths.
Moderator
PS: Mr. Smith, thanks for the bigger picture. I didn't really follow the whole story - just put up that picture because I liked it, and I wanted to put up that Stevie Ray Vaughn song. I tend to think that this equipment wasn't designed for this extreme cold for the same reason deep South airports don't have very much de-icing equipment. There's a poor pay-off. Or were some of these problems really just not anticipated?

OTOH, the energy infrastructure is more important than the airport infrastructure. This ought to be a good lesson to potential Texas preppers.

RT was pretty fair about the Greta joke. They also called her a "sacred cow". Thanks for the links.
Moderator
PS: Alarmist, I did figure you had left out a bunch of zeros by accident. 477 tons, though, maybe that's just the amount under J.R. Ewing's ranch.

Mr.Blanc, I didn't realize that about the Cream song. What I like about the original Crossroad Blues is it's connection to the legend of Robert Johnson, the guy who sold his soul to the devil to be a good guitarist. I don't know if you've seen the movie "Oh Brother, Where Art Thou?", but it has a scene about that - the movie picks up on all these depression-era themes. Plus I really like the Soggy Bottom Boy's "Man of Constant Sorrow".

Didn't Zeppelin play the "Travelin' Riverside Blues" too?
Moderator
PS: I forgot to discuss the white man's vs. the black man's blues, Peter. I have a post coming tentatively called "The just can't get my shit together blues", and I'll write more about that. I do tend to like the Allman Bros. and other white blues better. Is it just because I heard that first?
Moderator
PS: Peter, I've read that "maths" thing, even from John Derbyshire who is pretty good at MATH (singular). I don't know where that comes from, maybe England, but I don't like it.

Wind power's big problem is storage, I think, just as with solar. I don't know if it could survive without tax credits. Then there's the killing the birds thing, something that will put your treehuggers into brain-lock.

Oh, yeah, Germany, did they not decide to just up and shut down all the nukes. Madness.
Adam Smith
PS: Good afternoon everyone...

The governor and media blaming the power outages in Texas on turbines and solar is a bit misleading. I blame the power outages on poor planning, namely not insulating their wells and not removing water from their gas lines...

"During a news conference Tuesday, representatives from ERCOT said there were 45,000 megawatts offline. Of that, 15,000 megawatts were wind and 30,000 were gas and coal."

"Failures across Texas’ natural gas operations and supply chains due to extreme temperatures are the most significant cause of the power crisis that has left millions of Texans without heat and electricity during the winter storm sweeping the U.S."

"gas is failing in the most spectacular fashion right now." Instruments and other components at gas-fired power plants iced over, and "by some estimates, nearly half of the state's natural gas production has screeched to a halt due to the extremely low temperatures," as electric pumps lost power and uninsulated pipelines and gas wells froze, the Tribune reports.

One of the two reactors of the South Texas Nuclear Power Station in Matagorda County shut down, knocking out about half of its 2,700 megawatts of generating capacity. Some coal fired plants were also offline. Texans should have better prepared their powerplants for winter.

I don't think there is any good reason for Texas to run out of electricity just because it's cold outside. Finland and Greenland manage to keep their wind turbines running in the cold...

It seems to me the real problem is that Texans failed to winterize their infrastructure.

"She needs to live a little, she’s only 16. She should be drinking Lambrini and getting fingered."

☮
MBlanc46
PS Try the original, Robert Johnson version of Cross Road Blues, preferably the second take. The Cream number is an amalgam of two Johnson numbers, Cross Road Blues and Traveling Riverside Blues. So far as the Texans go, they can freeze to death in the dark.
The Alarmist
PS

That should be 477 billion tons of coal.
PeterIke
PS
"a classic white version of the famous blues song"

I was never a big fan of "Crossroads," though I love, love, love Cream's "Disraeli Gears" album. On the larger point, for me, the top like 10,000 blues songs are by white bands, and then maybe a black song shows up, and that one's by Hendrix. Blues is yet another area where whites outshine blacks by leaps and bounds. Namely, that all those dull black Blues songs sound exactly the same, but the white ones are different and way more creative. The Clash did the same thing with reggae. But I digress!

Back to the ongoing Global Warming disaster of really, really cold weather.
The Alarmist
PS

The World’s Indispensible Power, sitting on 477 tons of coal (more energy than oil and gas combined), letting its people freeze or gas themselves to death to save the planet. How noble.
PeterIke
PS

Arrrghhhh, all the math, it burns!! Or do we say "maths" now?

Anyway, I believe the Green Teching of Tejas may have been due to that old standby punching bag, George Booosh, when he was the guvnah. Another Booosh disaster! Thanks, Masonic Dolt!

I think windmills are one of those dividing points in American culture. You're either for them, which makes you an idiot, or against them, which means you may actually understand how stuff works. There's a third option, too, which is that you're a shameless Al Gore style Green grifter, who flies in his private jet to his ten zillion megawatt house, while insisting the rest of us eat bugs to "save the planet" or whatever. Gore doesn't believe in anything except his bank account, which is quite full, I'm sure.

The Lefties are having fun blaming "dumb Republicans" for what's happening in Texas, even though it's dumb Republicans pursuing Green policies, but such distinctions are never part of the Discourse of Humiliation, which is 24x7 these days. And we never hear much about the ongoing disaster that is the California power situation. Or Germany, for that matter.

Shaping the Narrative means never having to say you're sorry.