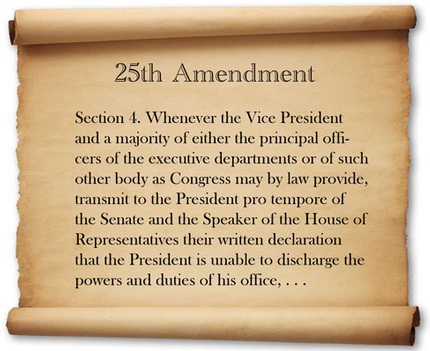 Due partly to the at-the-time recent assasination of John Kennedy, and subsequent installation of the Socialist bastard Lyndon Johnson as Presidedent, the proposed Amendment XXV (that's "25" for those of our readers in Del Boca Vista*) was passed by the US Congress in July of 1965. It was ratified by the 38th State (Nevada, in this case), per the required 3/4, in February of '67, about 54 years ago.

This one is not as succinct as most of the Amendments and the Constitution itself, for that matter. The writers tried to cover all of numerous situations that could occur, and some that had occurred:

In case of the removal of the President from office or of his death or resignation, the Vice President shall become President.

Whenever there is a vacancy in the office of the Vice President, the President shall nominate a Vice President who shall take office upon confirmation by a majority vote of both Houses of Congress.

It's hard to see that very many partisan or ideological arguments could be made against Amendment XXV. This seems like a lot of overdue housekeeping, some rules to keep thing straight for the next incident. There haven't been so many involving physical incapacity or death recently. As much as the US Feral Gov't leadership is resembling the old Soviet Gerontocracy, the science/tech side of healthcare has improved so much since the 19th century, keeping them all around. Unfortunately, often enough, they stay well past their "best governed by" dates these days, while back in the 19th century, there were Presidents dying from having frozen their asses during their inauguration and stuff like that.

The Constitution Center's Amendment XXV Interpretation Page, written by Law Professors Brian Kalt and David Pozen, has some good history notes to explain the evolution of the ideas of the succession of Executive Branch powers. Note that Article II, Section 1, Clause 6 of the Constitution stated from the beginning:

The question of whether the office itself "devolves" to the VP or just the powers (till an election of some sort?) is discussed by these professors. It became clear from the precedent of the death of William Harrison and subsequent elevation to Presidency of John Tyler, that yes, the VP becomes President. Section 1 makes this clear in writing.

Section 2 became very important during the later Nixon years. When Spiro Agnew (in my hindsight, a good guy) resigned, Gerald Ford was nominated by Nixon and confirmed by the Congress. I kind of wish he'd picked a stronger guy, as we know than Ford became President per Section 1 not that long afterward. Here's an interesting bit from the Interpretation article:

Second, what should happen when a vice-presidential vacancy arises? The original Constitution did not provide for filling such a vacancy. Prior to the adoption of the Twenty-Fifth Amendment, one Vice President resigned, seven died in office, and eight took over for Presidents who died in office: all in all, the vice presidency was unoccupied more than 20 percent of the time. [My bolding]

How much do we need that bucket of warm spit** anyway?

The first of 3 uses of Section 3, as a temporary measure, per The Reagan Library Education Blog was by old Ronnie while he underwent surgery***:

On July 13, 1985 President Ronald Reagan became the first President to invoke Section 3 of the 25th Amendment. Or did he? Like the Amendment requires, President Reagan sent a letter to the President pro tempore of the Senate, which was Senator Strom Thurmond of South Carolina at the time, and Speaker of the House, which was then Representative Thomas “Tip” O’Neill of Massachusetts. In the draft above there are a couple lines which indicate that President Reagan had some misgivings about using the Amendment for a brief surgery. “I do not believe that the drafters of this Amendment intended its applications to situations such as the instant one,” is a line from the draft that made it into the final letter.

A couple of decades later, President George W. Bush continued with the precedent of temporary invocation of Amendment XXV, Section 3, basically "calling out sick", twice, in '02 and in '07. These were both done for colonoscopies, and, each time, VP Dick Cheney was temporarily elevated to assume the duties of probing the nation in the ass.

I'll point out another item I question here from the two professors of law:

In practice, power was never transferred and presidential inner circles typically concealed the President’s condition. This pattern came to be seen as increasingly irresponsible with the advent of nuclear weapons during the Cold War; the nation needed a fully functioning presidency at all times. In 1958, President Dwight D. Eisenhower sought to break the pattern by being more open about his health and by entering into an agreement with Vice President Richard Nixon that provided for Nixon to serve as Acting President in the event of presidential “inability.” [Again, my bolding]

Yeah, well, the Cold War is over. Unless there is a DECLARED war going on right now, what's the hurry if the Prez is down with the Kung Flu for a coupla' days****, or puking his guts out after a night of hookers and blow? Not our business. What if some very important legislation is on his desk awaiting a signature or not? Hell, I've got mail on my desk from couple of years back. No own cares. Let it rot. The less legislation, the better. I'm all for a Calvin Coolidge style Presidency.

Especially right now, in this era of the Black Plague 2.0, we should not expect so much out of the executive branch. We may expect soon a sign on the White House door:


"No tours today. Coffee Shop and Oval Office closed due to COVID-19. President working from home. To arrange an appointment or bill signing, scan barcode below to download our myPres app."

At first glance, Section 4 seems to just laying out more details of the powers of the House and Senate, the procedures, and the timetable involved, if the President is unable to perform the duties of the job. However, as opposed to Section 3, this section describes procedures for the case in which the President is deemed unfit for the duties, by others. Ahhaaa, this is where Amendment XXV opened a big political can of worms.

I was going to finish, but it seems like the politics that have resulted from Section 4 of the 25th Amendment deserve a separate post. Part 2 is coming tomorrow.

** Most attributed to Texan VP-to-FDR John Nance Garner, with, as usual, references to possible earlier uses. Oh, and it was "bucket" or "quart" or "pitcher", depending on whether anyone can properly record details from 60 to 100 years ago. See, now we got youtube!

*** The surgery was for the removal of a polyp in his large intestine.

It wasn’t so much the Cold War 1.0 as it was ensuring positive control of the use of the nuclear arsenal. The release of the nukes is ostensibly at the sole discretion of the President, so you need to be clear at all times who is in that role and whether or not he or she has sufficient capacity to make the call. Now that is all fine and good, but behind the scenes, the pinnacle of the military chain of command is the National Command Authority, which is the (surviving) President acting innconcert with the (surviving) Secretary of Defence. So while the President has the sole discretion, he or she still needs a concurring vote of the SecDef to set the wheels in motion. So behind the scenes, you have people following the comings and goings of everyone in the chain, and figuring who will be in place if the balloon goes up. It makes for interesting moments, like when the Secretary of Commerce dies after a rodeo accident, for those who have to follow these things.
Moderator
PS: CB, your point is also going to be in the post tomorrow. That's what I was thinking about. In the past, there weren't any Constitutional crises on this (before, and so far, after) Amendment XXV because the cabinet could cover for the man or advise him. That worked pretty well before the Trump admin, due to Trump's hiring of people who were pretty much against him.

Cloudbuster
PS Note this one part:

The convention has been left at default, that it's the President's cabinet that gets to make this call. The cabinet can be assumed to be at least nominally loyal to the President. However, a Congress with a supermajority could by law set up a Congressional panel charged with making this determination. At that point all they would need is a complicit Vice President to remove the President from office.
Moderator
PS: Agreed, Mr. Blanc. It needs a Part 2.
Moderator
PS: Mr. Hail, I never liked the Euro systems in which elections could be called at any time. I do think Americans should use the power of recall on judges and (talking to you, Cali) governors much more often.

However, I agree that impeachment is become part of the business model like Chapter 11 bankruptcy for airlines ever decade or two (each). I was going to mention that in the follow-up post tomorrow.
Moderator
PS: I hadn't even thought of that Peter. I guess I'm too good a person, no, just kidding that CAN'T be it. Yeah, when did those Congressfools start wearing masks and staying 6 fit apart anyway? Are we just very unlucky that the Kung Flu spared the People's House? 455 people here and 100 people there, not to mention the Sergeants-at-Arms and Surgeon Generals and not too many spring chickenshits, you'd think we'd have lost a couple more.

Hey, that reminds me - was anything said about the fact that the Insurrectionists were spreading the Rona all around the place? Did they fumigate it afterwards? Otherwise, I think the D's (and plenty of R's) got too carried away making it into the worst thing since 1812 and kind of forgot to say "yeah, and they could have killed us with the Kung Flu, the bastards!"

If we could only break in without face masks every couple of weeks and force them to quarantine in the Watergate Hotel for 14 days each time ... nothing would get done... it's be great!
MBlnanc46
PS That Section Four certainly leaves the way open for a real bleepstorm to be raised.
Hail
PS

I'm debating whether it's a weakness or a strength of the system to rigidly assign the presidential elections to once-every-four slots with never any changes allowed (as if election days are Holy Days and it's blasphemy to just do them any old time). Regardless of deaths or resignations or impeachments, there are to be absolutely NO fresh elections; Why?

By this point it's obviously the weight of historical baggage that prevents a fresh-election mechanism from operating. "This is the way it's always been done" for 200+ years. (It made more sense in horse-and-buggy days.)

I wonder if impeachment, which is apparently now a mundane political tactic, could evolve into a US version of parliamentary systems' "votes of no confidence" to trigger a fresh election, or to be a US federal presidential equivalent to the California Governor Recall thing. It would only fair.

But a system plagued by constant new elections is not exactly enviable either...
PeterIke
PS
"Unfortunately, often enough, they stay well past their 'best governed by' dates these days"

Awwww hells yeah. When the Rona was just getting started, I thought, "This is awesome! A disease that's killing every old fart in America. How glorious if it shoots through the entire Senate!"

Yet... how many Congress Creatures died from the Rona? Wasn't Ron Wright the only one? I was so happily awaiting the croaking of Pelosi, Schumer, McConnell, etc etc etc. Yet not a one of the old swine died. God is mocking us!

Makes you think they know something we don't know.