Our Lady of the Forest - Book Review Addendum 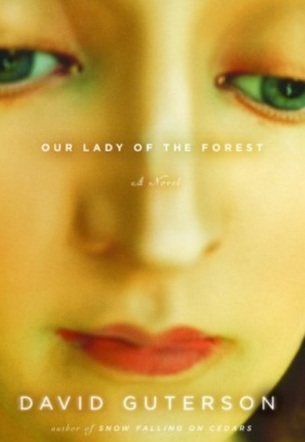 In Peak Stupidity's review of Our Lady of the Forest, I completely left out an aspect of the story that I had intended to discuss. There should be a number (4) to add to the 3 points I mentioned to explain what "Mr. Guterson [the author] really knows his stuff on".

This is a subject for which we should really add a new Topic Key. (I am working on a good name first.) Right now, this has the Feminism key, as that's the closest we've got. Feminism is the root cause of this big part of the stupidity space, if you will. Let me explain it in terms of the novel.

The character Tom Cross is either divorced or separated. I don't have the book on me anymore, so I can't check. Either way, in the story, he is mostly the cause for the divorce with the tragedy of his son (I'll won't get into all that detail), but his wife has some part of the blame too. Tom Cross ends up living in the motel room, leased from the •Indian owners, because he has been thrown out of his house by the legal system. This is most often the case in real life.

What David Guterson seems to know very well is the situation men can find themselves in, between family court law, their ex-wives, and their children. I'll state right here for the record that I am happily married and have never been divorced. However, I've known a few guys over the years that have been through the deal character Tom Cross has in this novel. Because of restraining orders, other court rulings and the like, men get constrained to a ridiculous degree. Any normal manly ways of getting things done can be perceived as threats to the ex or violations of the court.

The scene in this book that rings so true to life is the one in which Tom Cross must get his pick-up truck camper top back from the ex-wife's yard. If you know that region of the country, one can't go long before some rain comes down, yet Tom has all his belongings in his truck. Well, the restraining order says Tom can't even go on his property. As his wife is inside the house with some other women who have been all set against him, he would like to simply get the camper top from the yard with no messy interaction and get out of there. It's not like the wife is going to get big bucks for it on e-bay (she'd let the thing corrode out there), so it's not about stealing, just getting this important task done.

It turns out the ex's or one of her sympathetic girlfriends' little POS car is in the way. There's no way to drag the thing out without moving that car. Rather than start a scene inside by asking her as nicely as possible to move it, he decides to move the car, the women come out screaming bloody murder, and then Tom is in trouble with the law yet again. (Luckily, since the Marian apparition madness is in full swing by this time, the law is way too busy with other things for a while.)

This makes number (4) of the list of things the author knows well because he describes so well the situation a man can get in. It got almost impossible for Tom Cross to get his life in gear and his truck in gear with his camper top to save his belongings due to the legal stupidity and feminism inherent in today's family court world. This is a subject area of stupidity that Peak Stupidity would like to get into more in the future.

Now, since our commenter Dieter Kief recommended this novel in the first place, I will paste in a few thoughts of his from the comments under the main book review post:

- - - - Wonders, craziness (and mental disorder), drugs (mushrooms), beauty of various kinds (not least natural ones) and religion and the unifying spirit (unio mystica) which connects all these spheres - - -

Thanks. Great review. The book has three centers: 1) Nature (you did focus on this one). 2) Life of regular folks in the rural Pacific Northwest (that theme was important for you too) and - 3) the longing for transcendence that springs from that hard life (here you are a bit on the defensive side).

Transcendence is big throughout. That and natural beauty - not only of the forest but also of Ann, the skinny, a bit run down but nevertheless (sexually) attractive visionary) and how (not only her) multi-faceted attractiveness affects the logger, the priest and the greater public - all on their own terms, so to speak. The unemployed logger, the greater public who is more and more drawn into the scene, the priest, and his supervisor. David Guterson makes it easy to follow these people and how they are attached to the many forms of inner-worldly transcendence, which the scenery and his characters embody and/or encounter in many different ways. The subtext of the novel is religious in the sense of a feeling of belonging, which people strive for - good people as well as other ones. In the end, that is what comes through - that longing for belonging, even if in a form, that finally might look as if this main theme of the book would be diminished by it (it isn't).

The founding equation is natural beauty (of all kinds - not least of the Pacific Northwest but also of the main run down desperate and skinny character Ann) - ajá: The main equation at the center of the book works like this: This multi-faceted natural beauty that is on display here equals transcendence and this transcendence equals longing and: A reason for belonging and the oneness of all kinds of folks - a feeling of universal unity. This mystic feeling which - in order to be achievable for us - must be turned into something that can speak to everybody though. So here is sublimation at work: The transformation of the primal (instinctual) drives of our bodies and our souls into something that encapsulates those (at times: dark) forces without falling for them: And that then must be - something else to mark the difference and thus - enable release/redemption. To cultivate primal (instinctive) longings means ideally to transform them into something that - can be shared. - A (religious) ritual, a speech, a song, a poem, a dance...***.

Since we talked about the Allman Brothers here: The movie Almost Famous shares quite a bit of the subtext of Our Lady of the Forest (and a skinny and charming groupie - Penny Lane (cute but too sugar-coated to be quite real: Kate Hudson. In this regard Guterson's Ann is much more realistic). But the religious/transcendental subtext of the novel is also to be found in lots of the Allman Brothers Band's songs: Not least in Blue Sky - with its "Early sunday mornings - bells are ringing everywhere" - and the "river flowing" under "blues skies": Nature and transcendence (religion) and - joy.

In case anyone is wondering why that favorite Allman Brothers' song isn't here, Peak Stupidity has featured it before, way back near the beginning of this blog, when we started out with our very favorites: here.

Dieter Kief
PS Allman Brothers density increasing even more around here. Amazing.
Mr. Achmed - your camper example in our Lady of the Forest is one of those scenes that you keep in mind as a reader without knowing them - almost (or kinda). At first glance they look too real to be reminded (as if they'd be self-explanatory - which they are. It's tricky. Regular things that become meaningful all of a sudden. - That's the quality of good art. Again - I'm glad you described it!)
Moderator
PS: I remember Julia, Track 2. Thanks for the comment.

"Southern" with a capital S is racist. Hey, guilty as charged.
Song Number 2 Track 2
PS Julia the cartoon character from the first two terms of fundamental transformation is my favorite feminist.
She is mommygov dependent from age 3 to 67.
She is wymyns hear her roarz.

Blue Sky is a winner and Eat A Peach is their magnum opus, the last album with Duane Allman.
One of the best slide guitar players ever.
Southern Rock? Dat's wayciss!