Disclaimer: Straight off of VDare article linked-to blow. Peak Stupidity has no idea who the tweeters and tweetees are. We don't care. The whole thing is stupid. 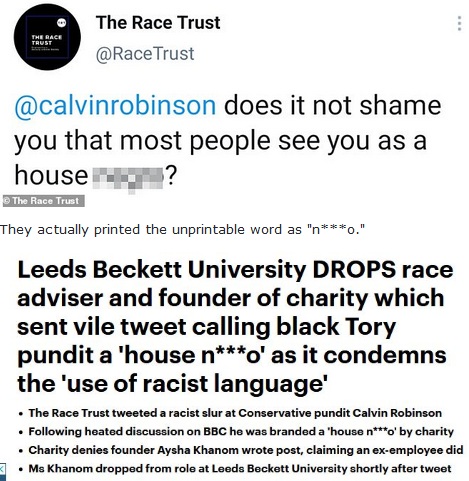 If you can't even mention the word "nigger", as we discussed recently in Cancelling the Cancellers, then can't "negro" be used in some situations? How about for black crayons ... in a Crayola set made for the Latin American market...? No? Still no?

I know what the proper description is for people is, "Black" with a capital "B", right? "Afro-American"? "Colored"? "African-American People of Color"? That sure takes a while, so I'll just use that when I have ctrl keys handy to cut/paste it from somewhere.

Peak Stupidity is just the messenger here, as the image above is straight from a John Derbyshire VDare post titled Woman Of Color Cancelled For Saying "Negro". What had triggered somebody was the phrase "house nigger". That's a derogatory term meaning "acting too white" that can only be used by Colored people about other Afro-American people. However, someone got triggered, so the whole class has to go to detent... errr, we need to all tweet back to stop this behavior, errr, behaviour, these are British kooks here, not our own.

Yeah, but people, the word "Negro" is still used in a lot of places. I wonder if all you zombies tweeters have thought through this a little bit. I see a costly problem right off the bat, involving changing the name of a beloved American institution (at least we love to make fun of the TV commercials):

Boy, that was a long set-up just for that lame-ass joke, huh? I also think that the single byte (256 bit) character set allows for quite a few anyway, and we need not worry. Maybe some computer guys here could tell me if the world has updated to 2 bytes. Man, that would cover anything the world could think of for a long time.

And all this time I thought "House Negro" was a compliment.

Reverential capitalization alone is not anti-racist enough so I've been putting an exclamation point on Black! because it seems more vibrant that way...

The africans in America sure have gotten uppity.

☮
MBlanc46
PS Ganderson: I can come up with some possibilities, but I’d really like to know the actuality.
Trotsky's Icepick
PS Leon Trotsky came up with racism in order to destroy the West.
Democracy is just the Petri dish for Marxism and utopia is not on the menu from comrade Karl the 19th century German bum.
Ganderson
PS
Mr. Blanc: In my short time as a resident of DuPage County in the late 70's the firemen who worked for us (we were a wholesale florist- the firemen worked as drivers on their days off) had a term for the Dan Ryan Expressway that was offensive then, and now it's REALLY offensive.
ganderson
PS
NatLamp to the rescue:

Well, you know what Fabolous sez ...


https://youtu.be/FJ2_y4wzJog
Moderator
PS: I just can't keep up with them, Mr. Blanc. I thought that Afro American was not one of the best choices they ever made, as who wants to be known as a race purely based on his hair style? Even in those days, there were a few Afro Americans that didn't sport Afro's.

How about "Weaved Americans" now?
MBlanc46
PS “Negro” was the polite term tor them when I was a youth. “Colored” was also acceptable, but a bit old-fashioned. Then “black” was made de rigeur by the, um, whatevers, themselves, and the other terms became proscribed, much as the, um, “N-word” had been. When I got to college in the mid-1960s, the edgy, white crowd that I fell in with preferred “spade” or “shine”. “Jigs” or “jigaboos” were still understood, but known to be not polite. I often use “Negro” when I wish to be provocative, and the dreaded word if I’m spoiling for a fight.