I can see a few guys wearing masks, but it's probably for the cold. 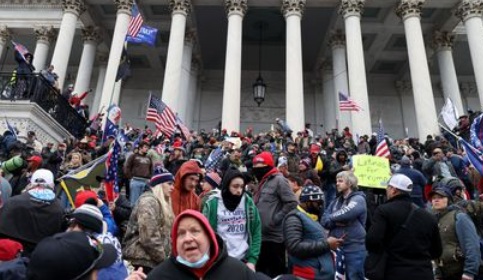 In the comments under our post When the masks come off, regarding the Capitol Gang, seen above past January 6th, E. H. Hail (of the "Hail to You" blog added a good point:

If it were an "insurrection," and especially given the ubiquity of masks, you'd think many would wear masks. (It doesn't hurt that it's literally the law to wear them outdoors, under a theoretical $1000 penalty as ordered by the typical big-blue-machine DC local government). But almost none were wearing masks.

Clearly they did not think they were doing anything illegal, or even near the borderline of illegality, or they'd have taken basic steps to conceal their faces. Many were probably against masks on principle, others may have believed 'Covid' was kind of a giant scam to get Trump, others just didn't care and didn't think they were comfortable/breathable for vigorous activity such as marching and protesting.

This is a different angle to the No Masks at Capitol Protest observation than the one you discuss here because it shows the protestors' motivations; No Masks = No Insurrection. (As if this point even has to be proven, but that is good proof of intent.)

I was going to put this into my own words, but when I went back to Mr. Hail's comment, I saw that this is the same way I'd have put it. There was no big plan to take over the Capitol ahead of time. Had there been, the idea of masking up would have been brought up by someone - the timing, as I wrote, would have been just perfect. Or, does the left just think those who don't have the very same ideas as they do and comply with the same politicians they do are just stupid? 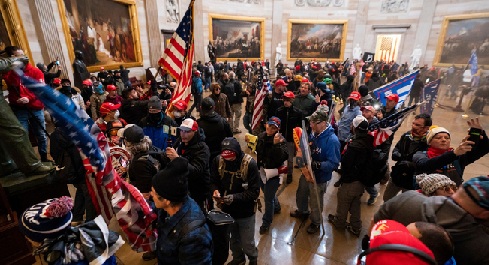 I don't really think that. The idea that there was an INSURRECTION AGAINST THE UNITED STATES OF AMERICA is just such a blatant lie. This point is another one that helps all Americans with common sense see this blatant lying.

Dieter Kief
PS
Excuse me Achmed, I would not bother with RU's sentence that the 2020 election fraud was comparable to parallel actions (Robert Musil) in 3rd world countries - if this sentence was actaully right.
It is not rigth though. Media and big tech made that wet dream of gaining power by falsely accusing your competitor of being Hitler come true - and that would not have worked out in the Central African Republic or in the Republique du Congo or Tschad or in Brasil. This could only have happend in the US. So. Zero points here for our scribbler over at Unz.com, hehe.

(He did gain a lot of points in other contexts in this essay about the election, I'd concede that. Oh - and on James Thompson's blog he asks today at what real numbers this excess death debate in the US is hinting at).
Adam Smith
PS: You're welcome, Achmed. ☮

Moderator
PS: Thank you, Adam.
👌
PS Lügenpresse
Moderator
PS: Dieter, Mr. Unz thinks that all social/political phenomena can be analyzed with stats (kind of like iSteve too, but iSteve has more common sense). In the case of the '20 Pres. election, yes, the numbers that the D's and their Lyin' Press branch refused to even talk about, will show that the election shenanigans were indeed a huge factor.

In that article (read it before, but not the comments) Mr. Unz enjoys telling Americans that this election was a sham such as one in the 3rd world. I think that is his point, not erroneous, but a point made just as a dig at the country. Unz doesn't seem to care who got elected. This is from the article, though it's in a part he had blockquoted from one of his own comments on the site:

"Frankly, both sides are so totally agitated and extreme, the Trumpists would be saying and believing it, even if it were entirely false and impossible. It’s hard to figure out what’s happening when everyone involved is so dishonest and corrupt. " Bullshit, Unz! The Conservatives have been too civil and too tolerant about the whole thing. No, if there weren't evidence of dozens of different TYPES (not just instances) of cheating, there would be no complaints from the right. No, everyone on the right is NOT dishonest and corrupt.

See, this just reinforces to me the point that Ron Unz just doesn't ever get out and talk to people.

Anyway, yeah, Mr. Unz doesn't like the cheating/dishonesty. That's good. The rest of the article is a nice take on the hypocrisy of the Capitol Gang getting treated like INSURRECTIONISTS!, while all kinds of other incidents like this in the past (I remember that Wisconsin legislature thing too) are shown as harmless fun and part of the political process.

If he got out more, Ron Unz would know that this kind of thing is why Conservatives seem a little agitated now... We all know already everything we read in the bottom half of that article from common sense and perspective.

Just to link this to Ron Unz's Kung Flu Panic mode, it's exactly this: He thinks that because he's a numbers guy, and this "expert" in the government has this certain model of the spread, then it's cut-and-dried - 2 million will die! Mr. Unz forgets to think about the quality of the numbers input to said models. He was a computer guy, so he ought to understand "garbage in, garbage out", but this is the real world. You have to decide what's garbage and what's not. There has been a whole lot of garbage in.
Dieter Kief
PS - I had this article of Ron Unz about the 2020 election in mind - which is not too long and- : - not the least bit anti-American btw., Achmed

Thank goodness this insurrection failed ... can you imagine how feckless the Revolutionary Council would have been if they had attained the reins of power?
Moderator
PS: Mr. Blanc, I get lazy with the accents/various marks too. I also think it's not my job as an American writing in English to include them anyway.
Moderator
PS:You're welcome, Mr. Hail.

Mr. Kief, I saw others on unz.com make the point about the so-called "insurrection", but I didn't know Mr. Unz had written an article on it. I'll go look for it.

I guess the Lyin' Press sets the priorities on which story is the story of the century. They were going gangbusters with the Kung Flu Panic, but they couldn't pass up on making these light festivities by the Capitol Gang take the top spot.

Per the Lyin' Press:

well, I could have a full top 10 of problems, actually.
Moderator
PS: Another funny rant - thanks, Mr. Grobnik. Naked Pelosi Pics on the laptop - see, now THAT'S how you get them to make policy for you. Perhaps the hackers will be the ones to save the country.
MBlanc46
PS Hey, Slats, you still living on Milwaukee Avenue in the old neighborhood?
MBlanc46
PS True enough, but, unfortunately, even many of those with common sense still get all their (mis)information from the Lugenpresse (sorry, I don’t do umlauts on my tablet).
Dieter Kief
PS
I've seen the point made numerous times that this was no insurrection. Not least by Paul Craig Roberts and Scott Adams.
And I agree, the masks could otherwise have been a means of choice.

OTH - if you assume that your opponents were flat out despicable creatures creeping out from the dirty remnants on trhe bottom of the basket of deplorables from the possibly furthest away hinterlands - : - You could also quite easily assume that they'd be too out of their minds and too empty inside their heads altogether to bother about even wearing a mask. So - round as many as possible of 'em up an throw them in jail for a decade and that was then that... - will hopefully scare the hell out of their retarded siblings back home too.

Then comes something a bit subtle: The accusers are not in their sharpest mood because they know that they have something (quite important, that is) to hide, even though senile Joe had already made it public in the boldest possible way: That this was the biggest organized voter-fraud in the history of the free West.

(I might assume even that this is the story of the century so far and that Co-19 comes in second, - - and here btw. - Ron Unz did a good job in covering this story - and he did not even use too many words telling this story).
Hail
PS

What's funny about this "the insurrectionists are maskless; the loyal, patriotic, non-traitors are masked" thing is how it stands out as a point no one ever got around to making (at least I never saw it) in the kabuki-theater of three-plus weeks of outrage at the Trump Insurrection, in three-plus weeks of moral indignation that a Russian Puppet President was Attempting a Fascist Coup ("or whatever," as C. H. Hopkins says when trying to summarize the Trump Derangement Syndrome position).

The loyal-opposition Fox News and even Newsmax, which Iis really a low-rent Fox News in the end, from what little I saw, largely took the same line but just less shrill.
Slats Grobnik
PS A day which will live in infamy as toothless hill scoggin deplorable kulak untermenschen scum emerged from the backwoods and attemped a Munich beer hall putsch with horny Vikings, twist ties and selfies!
How dare these profane vandals soil the halls of the best government that money can buy in the shining cesspool of clueless feckless corruption on the hill.
A Florida man actually stole the sacred Blutfahne lectern.
Another barbarian carted off with Nancy Pelosi's laptop hoping to see her hot sexy naked selfies.
Off with their heads!