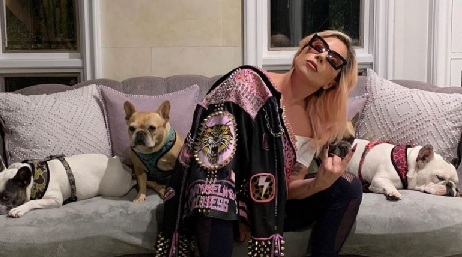 No, I really don't hear anything about or from her, but I have read something about her and the kidnapping of her doggies. Oh, and whenever I read her name, that Queen song Radio Gaga comes into my head. It never fails, in fact. Because it's not one of my favorite Queen songs though, I won't feature it in this post.

Rather than that, Peak Stupidity will feature something completely different. This is a snippet of a proposed movie treatment*, or screen-play, of a film to be called The Pink Panther's Dog Day Afternoon. 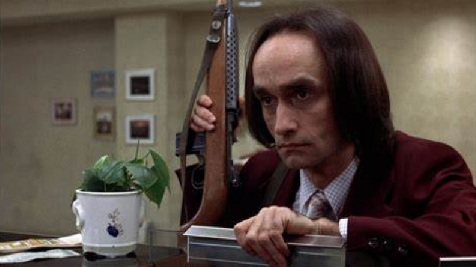 All three hostages are in the house. From the dialog between Sal and the hostage negotiator on the phone with Sal first:

“Get that squad car off my driveway! One more move like that and the dogs get it!”

“Of course, Sir, that was a stupid move by the LAPD. We’ll be talking to them about that. (Sargeant, get your men away from the house, now!)… OK, I’m a hostage negoti... errr, your friend, and I’m here only to help you get everything you want, so the everyone can walk out of there nicely. Now, you say you want a pepperoni pizza for yourself and you need a 10 pound bag of Purina Puppy Chow and two cases of Fancy Feast. What should we bring for the dogs? Now, can you put the gun on the kitchen counter for me, Sal?”

“Yeah, they're French Bulldogs, so I want a case of canned escargot, extra large snails. Also, I want a jet ready to go for me at Van Nuys, with enough fuel to get me out of the country… to Wyoming. You got it, copper?! Also, do your dogs bite or sing?

What’s happening in there, Sal?! Did you shoot one of the French bulldogs?

“No, that was Lady Gaga. I thought you said your dogs don’t sing!

“She’s not my dog. OK, the pizza and escargot are on the way.”

Man, writing a screenplay, ain't easy. Well, it's a work in progress. I've got Rob Reiner the Meathead looking at it right now - he may have some tweaks. In the meantime, I'm already thinking of changing it a little bit since Lady Gaga got her dogs back and is still singing.

If it's not funny at all, well, I hope it's just that you haven't watched either or both of the two movies, The Return of the Pink Panther, from 1976, starring the hilarious Peter Sellers, and Dog Day Afternoon, from 1975, starring Al Pacino and John Cazale as Sal.

Here's the great scene with Peter Sellers. I highly recommend Dog Day Afternoon. There's part of it that's got me planning on writing a review on it soon.

Seriously for a second, I understand the loss of one's pets, and really do feel for someone who has one taken like that. However, what about the poor dogwalker guy who got shot 4 times in the chest? Well, he's breathing on his own, at least, I just read.

Something I've learned from this is that the occupation of Dog Walker is not always a cush job like Diversity Coordinator or Peak Stupidity Blogger. I don’t know where it falls exactly in the list of dangerous occupations, but I’d guess it’d be somewhere between Bush Pilot and Nuclear Disaster Clean-up Coordinator, right now probably # 5 with a bullet.

If I ever change careers to be a Dog Walker, I will refuse to service ANY dogs worth more than 20 bucks apiece. Oh, and Labs, because they are known to get Stockholm Syndrome when they get kidnapped.

Catnapping, well they're on their own. They can take care of themselves pretty well, and if it happened, you may expect a call from the kidnappers offering YOU money to come get them back.


* That's what we call it in the Biz, though I have no idea why.

Moderator
PS: Thanks for the comments, all.

I suppose that wasn't her given name, Robert, but then I just found out that Stevie Wonder's real name is Stevland Hardaway Morris. Man, his Mama could probably have joined the country club, before they saw her. I

I can't say I've heard anything Lady Gaga has sung. I just give most everyone after, I dunno, John Cougar, a hard time, based on probabilities. She may be hot, but they sure do dress up weirdly to ruin all that.

Yeah, how about Lady Gaga in a meat suit v starving toy poodles (to make it fair) at the Colosseum, soon as the COVID-21 lets up. Be there or be square. It's free Cheese Head night. We saw the Colosseum a couple of years ago, along with about 10,000 Chinese tourists.

I just listened to the Queen song Radio Gaga, and it's better than what I had in my head. It's just that there is no Brian May guitar in it, at least not anything I can make out
Adam Smith
PS: Good afternoon everyone...

Miss Gaga seems like a really good role model for young ladies. I kinda like her face diaper.

The thing about La Gaga is that she is not without brains or talent(ish), but to thrive in the pop milieu you have to basically produce over-the-top crap directed not at the lowest common denominator, but at whatever denominator is a hundred feet lower still. It's shock and awe for the plebs. Trust me, we WILL get back to people being eaten alive by animals in the Coliseum. The glide path is inescapable.

Gaga is not unattractive and has all the raw materials for being a good wife and mother, but Weimerica had other plans for her. What a waste.
Monday Night Rehabilitation
PS Lady Caca? I wouldn't know one of her "songs" as I don't listen to any contemporary audio queef Pro Tools warp voice noise for drooling dullards who think that a return to Stalinism is a brilliant new plan for the glorious utopia.
Didn't she wear a meat suit at some back patting circle jerk participation trophy shindig or something?
How about that getup in a cage with some burly dogs that haven't been fed for a few weeks.
Then I'll be impressed with Lady Caca.
Robert
PS: Whenever it was that I first heard of (or heard?) Lady Gaga, I somehow assumed it was a dude. Only some strange poof or transvestite who likes to re-enact scenes from "Whatever Happened to Baby Jane?" would name themselves like that.

But, what do I know?