Stevie Wonder going back to the Mudderland

Face it, with their ungratefulness and almost innate leftist stupidity, there are many millions of people who we feel really ought to go back. Some are not even close to being newcomers, but, hey, they are still quite welcome, as far as I'm concerned. 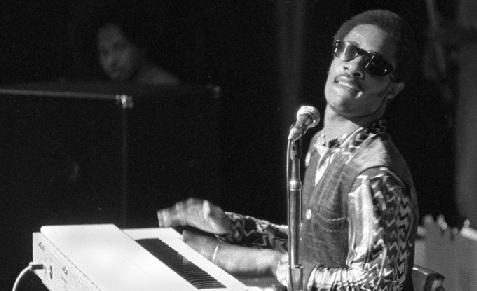 I would never have said that about Stevie Wonder. I've like lots of his music, going back to the 1970s. His Boogie On Reggae Woman is a hell of a good tune with a great funky sound. Though that post was from last summer, I remember using that song to test the youtube embedment process (still not working on Internet Exploder, AFAIK) back when I was putting the band blog together.

However, in a case of blind stupidity, as reported by a site called Page Six, Stevie Wonder [is] moving to Ghana to protect grandchildren from racism.

Stevie Wonder, good old Stevie Wonder ... worried about his grandchildren .. racism is not .. it makes you wonder, doesn't it? I guess that whole Ebony and Ivory thing ain't workin' for old Stevie. He's fine with the Ebony but tired of the Ivory. I wonder what's up with old Stevie. Oh, man, now I've got this guy doing Trump again in my head. Make it stop! Commenter PeterIke quips "I bet he's not Ghana like it there."

Anyway, his career is over for me, as the last hit I recall (aside from the duet with Sir McCartney cited above) is I Just Called to Say I Love You, and wiki says that's from 1985, so I'm just not gonna let myself get all bent out of shape about this. From the short article:

The “Sir Duke” crooner, 70, told Oprah Winfrey in a recent interview that the decision came out of the growing racial injustice he believes is pervading American society.

I would say "take a look around you, and see where the racial injustice is" but he can't. He can listen though.

You wonder how he and his grandchildren will get treated in Ghana if they ever find out that Stevie's real name is Stevland Hardaway Morris. Consider yourself doxxed, bitch. They may not take too kindly to people with names like that, or if, say the US dollar dies, and the grandchildren don't live like Kangs and Queens anymore over there. I think that's what it's about anyway, being a famous big fish in a little scummy pond.

What I've seen all over the place lately is people from Ghana who've moved HERE. In fact people from all over the place have moved here, such that I met a woman at the auto parts store from Paraguay.* Paraguay! I was probably the only customer who knows where the place is on the globe. She liked that, and she's pretty good, but seriously, is Paraguay an auto parts mecca to where we need AP-1 Visas to get more people doing the looking up of make, year, model, and engine size on the computer that Americanos just can't do?

That digression over with, you go on, Stevie and family, and make good over there. If you come back with your tail between your legs, write us a good song about that. In the meantime we can get your stuff for free off youtube, like right here, one of my favorite romantic songs:

All Stevie Wonder's best music was from the 1970s. This one was from the Talking Book album from 1973. The first half of the first verse was sung by one Jim Gilstrap and the next half by the smoothed-voice Lani Groves. I think these two sound much smoother than Mr. Wonder, but he wrote the song, sang the rest, and played those great keyboards, so kudos to him on this one, my 2nd favorite of his songs.


* No, she wouldn't tell me exactly where the Bushes are holed up. I think it's in one of those gated ex-Nazi subdivisions. They're getting long in the tooth, but those ex-Nazis are still really strict about the H.O.A. fees and bringing the garbage cans back up to the house by 5 PM. Mach Shnell, Beaners!

Cloudbuster
PS "I haven't been to either, CB, though I've been to 2 S. American countries."

Me too. Brazil and Mexico. In fact for a while I spent quite a bit of time in Brazil, living there for a month or two at a time on a couple occasions as well as many one-week trips.

I occasionally draw on that experience to try to explain to people why the elite have no fear at all that the US will become Brasilia Norte: Life in Brazil is a pretty sweet deal for the elites.
Moderator
PS: I haven't been to either, CB, though I've been to 2 S. American countries. I was really ready to check out Uruguay before the 'rona Panic set in.

I'd say Paraguay if you want to REALLY get away from it all, but Uruguay if you want to have a more western-family style life in a more decent environment. I always remember Paraguay from the Jimmy Buffet song "Cowboy in the Jungle". The guy was hanging out with the gauchos down there, since his money all ran out. Sounds like a future Fred Reed column...

Oh, "living the dream" in Ghana, huh? Now that is something to hear, "best in class" even after you see Adam's pics!

I'm trying to think if there is anywhere in Africa, minus White strongholds in the south, that would beat ANYWHERE in S. America. The Guiana's are in contention. I'd first thought, man, if not one American in a thousand could even name those 3 places, much less the capitals, maybe they'd be the way to go. Then I looked at the demographics. The demographics of those places is ... unsound.
Cloudbuster
PS Between Uruguay and Paraguay I can never remember which one is supposed to be the secret White paradise retreat.
Cloudbuster
PS While you're perusing Adam Smith's images, keep in mind that Ghana is considered one of the most successful Sub-Saharan African countries. They're living the dream in Ghana compared to most of the continent.

https://en.wikipedia.org/wiki/Ghana#Economy
Moderator
PS: Mr. Smith, those were pretty brutal. Then again, isn't it right on the Ghanian flag itself, that national motto: "Hey, at least we're not Haiti, asshole!"

CB, I know Stevie has an excuse of not having seen pictures like that, but I guess anyone else spouting his mouth off will be quite disappointed after a few days of realizing, that no this is not on a fact-finding vacation. As PeterIke said "they are not Ghana like it", and now that, in fact, appears on the post. (Thank you Peter. My lawyers say that you electronically signed something by putting in the capital "PS") . ;-}

Agreed, Mr. Bobby, there's no AA middle-class government jobs for them, ripe for the pickin'. "Don't get off the fucking boat!" [/Apocalypse Now]
Ricky Bobby
PS American blacks are not wanted in the glorious motherland.
It is eat or get ate law of the jungle with no social safety net or mommygov EBT cards.
El Presidente and El Gran Dictator will put any trash talkers against the wall and ban the Twitter domain outright.
The Great Society is an epic failure but at least the CPUSA (democrats) got some lifetime dependent voters.
PeterIke
PS
I bet he's not ghana like it there.
Cloudbuster
PS Thank goodness. Glad he's gone. Don't let the door hit him in the butt on the way out and all that. Now if only tens of millions of other chronically ungrateful PoC would follow his lead.
Adam Smith
PS: Good morning Mr. Blanc, Mr. Moderator...

☮
MBlanc46
PS It’s difficult* to live in this country without having heard of this Stevie Wonder person. So I have heard of him. Fortunately, I doubt that I would recognize any of his records. I might have been in the presence of one once or twice, but I don’t think I’d recognize any of them as his. But even if I did, and thought they were great (which is doubtful), I’d say, “Good riddance”. Ghana is where the old reprobate W.E.B. DuBois decamped in his last years, in order to enjoy the glories of socialism. My best friend has some very high level connections in Ghana. He spent a week or so there a few years back. From his descriptions of the place—and he saw the very best of it—it’s a place any reasonable person would avoid like the plague, and get the bleep out of as quickly as possible, should he, by some mischance, wind up there.

* Difficult, but not impossible. wager that the friend to whom I referred has never heard of Stevie Wonder.
Moderator
PS: Yeah, I wasn't sure what he meant by that, Adam - I thought one more concert or something. Godspeed, indeed!
Adam Smith
PS: 38,000,000 million... Lol...

Me too Stevie. I truly appreciate the fine example you are setting for your people. I hope all 38,000,000 million Africans in America follow your lead. Wakanda awaits.