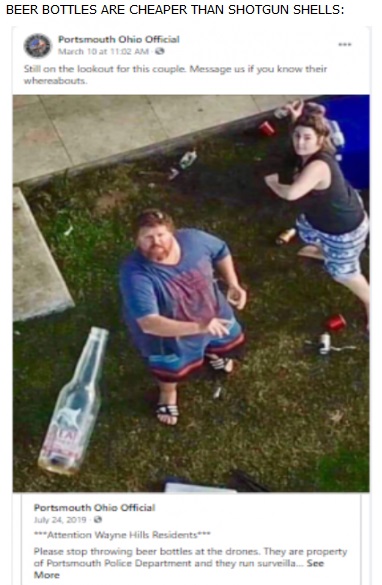 The nice comment at the top is by Charles Glasser, one of Glenn Reynolds' sub-pundits, from March 14th. Hey man, nice shot!

Mr. Reynolds is a pretty good Libertarian, and I guess he picks those with similar views to be his sub-pundits (he's got quite a few of them now, one or two handfuls). I like his featuring deals like this.

This tweet and picture are from Portsmouth, Ohio, in southern Ohio right on the Ohio River 30 miles or so downstream from Ashland, Kentucky. It looks like that beer bottle got pretty close. I'm no lawyer (Professor Reynolds is), so I don't know what the laws are about flying objects and property rights. I think we should have the option to buy airspace along with our land property (and often underground rights). How high would it go normally, if we are not under the traffic pattern of an airport? 500 - 1000 ft. above ground level would be reasonable.

We can't do much about those satellites that supposedly can read license plates from orbit. OTOH, I don't think they can't just focus on on one given area on demand, as you see on the Jason Bourne movies*. Will drone battles be a part of the next Civil War?

Kirsten is nicer to watch than Greg Kinman or Kyle Myers...
https://www.youtube.com/c/KirstenJoyWeiss/videos

You got me. I was thinking of controlled airspace only as the NAS. Must remember that, because it will be on the next flight review. ;)

I think the upper limit for non-commercial drone operators is 400 feet AGL in uncontrolled airspace, subject to a host of restrictions. Land of the free and all that.
Ganderson
PS

Baseball. Not much hockey played in southern Ohio.
Moderator
PS: I just watched that video, Peter and Adam. Yeah, she could introduce a lot of guys to shooting. That was NICE.
Adam Smith
PS: Good evening Peter...

Lol. It gets easier to watch, give it a chance...
Watch it a couple more times. Enjoy...

☮
PeterIke
PS
"I think you guys will enjoy this last video..."

Not I! I wouldn't DREAM of enjoying a hot white girl shooting a rifle! It's.... anti-feminist! It's... objectification!! It's... pro gun!! Honestly, I'm horrified. I am LITERALLY shaking from that video.

"I guess a shotgun with some buck shot would do the trick, but one could experiment with bird shot too, I suppose. Start with the small stuff for experimentation's sake."

I would guess it depends on the size of the drone and how close or far away it is. Someone (obviously not one of us) could shoot down a large drone from a pretty good distance with a .22 rifle. Drones are pretty fragile and any hit is likely to knock one out of the sky. Birdshot is probably better than buckshot or a rifle as it has more pellets thereby increasing your chance of a hit. #8 birdshot would probably work nicely at perhaps up to 40-50 yards.(?) No doubt these drones have lithium ion battery packs that would reach thermal runaway if penetrated by a projectile. You can probably down a good size drone with any decent air rifle. Let's see what happens when you shoot a lithium ion battery pack with a couple pellets from a daisy .177 pellet gun...

So what are the Portsmouth Police flying?

Most of these drones are quite small. Birdshot would be more appropriate. The largest drone is the Matrice 210 which has a max takeoff weight of 13.5lbs. The Mavic Spark weighs in at a mere 300 grams. Matrice 210 hunting is probably a little like turkey hunting. The smaller drones are perhaps like rabbit or squirrel hunting.

This would probably work pretty well on the small drones and perhaps on the large drone too, especially at a closer range.

☮
Moderator
PS: Thanks for the links too, Adam. Maybe a "friend" could use this information.
Moderator
PS: Regarding the mineral rights, I do remember your comments from a long while ago on this, Adam. Allodial title was the deal, as I recall you explaining to me. Texas does sound like it's got it's act together well on this. There are a lot of other reasons to like Texas too.

On the FAA regs, that "purpose of landing or take-off" language is an out for anyone near an airport (for small planes within a mile or two), but, in a legal battle, one would have to prove that he actually flying at that altitude in that spot due to actually taking off or landing. Otherwise, the rules are 1000 ft. agl in congested areas (not so well defined), 500 ft agl in others, and in "sparsely populated" areas, one can fly 10 ft above the desert but must still stay 500 ft. from any man-made object. You can go up the coast of New Jersey at 100 ft off the water (been there, done that), but must stay 500 ft. horizontally (or "slant range" to get technical) from a sail boat, for example, or back up to 550 ft. over the water to clear its mast over the top - TECHNICALLY.

Drones can land and T/O vertically, so they have no excuse regarding that aspect of the law. There is separate law being still developed for them, especially to keep them away from airplanes.

I guess a shotgun with some buck shot would do the trick, but one could experiment with bird shot too, I suppose. Start with the small stuff for experimentation's sake.
Adam Smith
PS: If you don't "own" the minerals you don't "own" squat.

“I think we should have the option to buy airspace along with our land property (and often underground rights).”

We do. The mineral interest holder (underground rights) has superior title, which includes the air rights.

The "Portsmouth Police Department” has no business flying their "Anti-Drug Activity" drones over anyone's house. If the local sheriff was flying "Anti-Drug Activity" drones over houses around here their drone would get shot out of the sky and I think everyone has a right to do so. That said, I doubt these people really "own" their land. For all I know these people may be renters and their landlord might have two mortgages on the place.(?)

"Whoever owns the soil, it is theirs up to Heaven and down to Hell."
What I would call "All right and title in and to the land forever."

Texas Land Patents phrase it as...

"I __(Governor's Name)__ Governor of the State aforesaid... Grant to __(Grantee)__ heirs or assigns, Forever, __(Leagues and/or Labors)__ of Land, situated and described as follows: __(Full Legal description)(Many blank lines)__

Hereby relinquishing to the said __(Grantee)__ heirs or assigns Forever, all the right and title in and to said land, heretofore held and possessed by said State, and I do hereby issue this Letter Patent for the same."

This sort of title includes all the minerals, water, land, air, wildlife and everything else you can think of within the boundary. (Originally it was not subject to taxation. I believe that if there is no lien and no split interest it is not “subject to taxation” today. Yes it can be done.) If someone flies their drone over this sort of land the title holder has every right to blow the drone out of the sky for trespassing.

However, some municipal corporations hold the mineral interest to the land under the municipality. In this case the "land interest holder" doesn't have nearly as many rights because the “mineral interest holder” has superior title to the “land interest holder”, air rights included. There may also be power line easements which encumber these peoples “air rights”. I don't know if municipal police departments can use power line or other easements as a sort of “right of way”. Also there is what is called "navigable airspace".

“The exact altitude(s) at which the airspace over private land can become subject to "substantial impairment" is often debated. Case law in the past has used the height of 500ft (150m) in urban or suburban areas, and 360ft (110m) above the surface or tallest structure in rural areas as the demarcation of where impairment of property rights can occur.”

I suppose Peter is right. It is foolish to expect “government” to respect property or any other rights in Weimerica. So, perhaps it's time we start using radio frequency detection and/or jamming equipment to commandeer these police drones. Take control of the damn thing, launch it into the sky as high as it will go, and then let it come crashing back to the earth. If it damages anything blame it all on the recklessness and incompetence of the police department.

☮
PeterIke
PS
I suppose the expectation of privacy or having your property rights respected is long gone in Weimerica. You only have the right to privacy if you're a ten year old boy that wants to become a girl, or a 15 year old girl that wants an abortion.
Moderator
PS: Alarmist, Class G airspace (for students, "G" can be for "ground") goes down to the ground. However, no aircraft needs any clearance, even flying instruments, believe it or not (it'd just be stupid, because it only goes up to 700 ft or 1,200 ft AGL), in there. Thank you for the info on the 80 ft. That'll keep a drone above beer bottle range, but not some other homemade AA weapons, and, of course, guns.

For Mr. Ganderson, I assume you mean hockey?

BC, it's tough to throw up, too. I don't mean just the obvious ballistics disadvantage, but it's hard to aim like that. I might have tried to sneak up on the roof with a 6-pack of empties and gotten a better spot. It'd be a blast!
BC
PS: I wonder if that Portsmouth Legion team is still around. That lady is showing pretty good pitching form ( not throwing "like a girl"). I'd hate to be on the receiving end of that beer bottle.
The Alarmist
PS

There is case law to support the principle of you “owning” the airspace you actually use above your own property, with a practical value being circa 80 feet, e.g. by trees. At 500 feet, it is clearly part of the National Airspace System, and anything between your airspace and the NAS is generally public airspace. Depending on how close you are to an airport and other considerations, you can put a radio tower up a couple hundred feet.

Beer bottles are cheaper, but shotguns are more fun. Interestingly, the last time I flew my drone in Florida, it was attacked by what I thought was a hawk
Ganderson
PS
In the mid 60s Portsmouth had a Legion team that had Larry Hisle, Gene Tenace, and Al Oliver, all of whom went on to become good major leaguers.
Adam Smith
PS: Good evening Mr. Moderator...

Beer bottles are easier to find too...