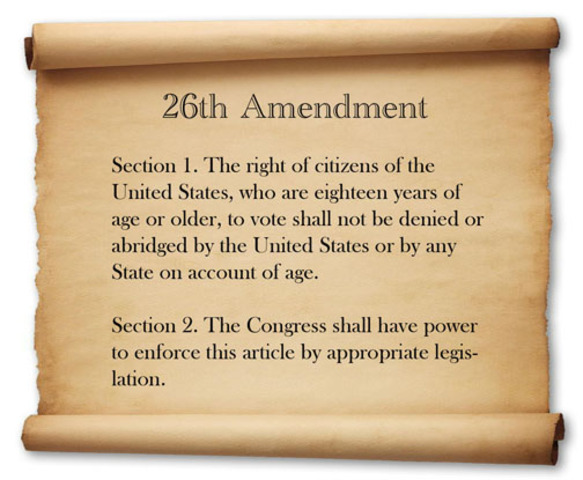 It's been another month since our last Morning Constitutional. "Don't do that", says the Doc. We're moving right along to the 2nd of the last one, so far.

"Well that was easy!" said the US Congress in March of 1971, and 3/4 of the States by just over 3 months later. Amendment XXVI was a copy and paste job from Amendment XV, with "age" subbed in for "race, color, or previous condition of servitude". The wording is otherwise exactly the same.

The voting age, as with so many other things back in the days of Federalism, was up to the various States. Nowhere in the original Constitution does it specify any ages for anything but office holders. It wasn't until Amendment XIV was railroaded through the ratification process in Southern States under "Reconstruction" in 1868 that States were required to allow any male of 21 years-of-age and older to vote.

Per, the usual Constitution-Center's interpretation page (more on this one at the bottom):

By the time of the Vietnam Conflict, most states still limited the franchise to people 21 and older. Because so many men between 18 and 20 were being drafted to fight in Vietnam, Congress came under substantial pressure to expand the franchise to them. Congress consequently enacted the Voting Rights Act of 1970, which lowered the voting age to 18 for all federal, state, and local elections.

In Oregon v. Mitchell (1970), a deeply divided Supreme Court held that Congress had authority to lower the voting age in federal elections, but lacked power to do so for state and local elections. Thus, states were statutorily required to allow people between 18 and 20 to vote for President, U.S. Senate, and the U.S. House of Representatives, but retained discretion to limit state and local elections to voters who were at least 21. In response to Oregon,

It was not just the Vietnam War - "If I'm old enough to kill people for the US Government, I'm old enough to vote". After all, a year into WWII, the draft age went to 18. Is it because this was the "good war" that nobody bitched about not being able to vote about it, yet being conscripted to fight?

I'm guessing that, because the Baby Boom generation, at the time of this Amendment, were 26 y/o, with 18-25 y/o's too, and huge in numbers, their voice was heard. It's not that I don't agree with their sentiment on this too, though. However, lets get to the ROOT of the problem. To do that, we go right back to the US Constitution, way on back, y'all, to the beginning. In Article I, Section 8 (mash that "keep reading" link), we see that the powers of the Legislative Branch include :

To raise and support Armies, but no Appropriation of Money to that Use shall be for a longer Term than two Years;

To provide and maintain a Navy;

To make Rules for the Government and Regulation of the land and naval Forces;

To provide for calling forth the Militia to execute the Laws of the Union, suppress Insurrections and repel Invasions;

To provide for organizing, arming, and disciplining, the Militia, and for governing such Part of them as may be employed in the Service of the United States, reserving to the States respectively, the Appointment of the Officers, and the Authority of training the Militia according to the discipline prescribed by Congress;

I don't see anything about conscription in there. Drafting of men to fight in the Revolution was done by the States themselves.

Wasn't the problem that Amendment XXVI was designed to fix rooted in the loss of State rights to begin with? If the State of Georgia were drafting men at 18 years-of-age, then perhaps Georgians could decide that those men ought to be able to vote, and so on. In fact, if you look at that case Oregon vs. Mitchell mentioned in that interpretation page excerpted above, you find that the Voting Rights Act of 1970 usurped almost as much States' rights as this Amendment did.

So, there they went again. Amendment XXVI took away States' rights regarding the election process, just as Amendments XIV, XVI, XVII (in a more fundamental way), XIX, and XXIV did. Anyone starting to notice a pattern with this Constitutional Amendment process? We've got one more. Let's cross our fingers for a lucky #27. I know, the suspense is killing you, right?


PS: About that interpretation page, again, they have got plenty of factual information to make it worth reading, but it's got the good writer/bad writer thing going on again. We don't learn directly which writer is the agenda-pushing bad writer, as it's all one essay, as usual. However, since there's this "she" pronoun for an unknown gender thing going on, I'm going to take a wild guess and say SHE is Jocelyn Benson - Secretary of State for the State of Michigan.

Hitler, in Mein Kampf, contended that people should stay away from politics until they reached the age of thirty and had formed a well-rounded view of the world around them (Weltanschauung). He was right.
Adam Smith
PS: "Without the right people you can't have a Constitutional Republic..."

☮
Moderator
PS: I agree that 30 or even 35 and literate, AND owning property for that matter, would be good limitations on voting. (And male, I forgot) However, as these guys were getting drafted, most of them not making this decision to go to Vietnam, I can see their wanting a part in the decision to sent them. I do understand that part of all this was a big lefty push to change, well, ruin, the system, war or no war.

What it comes down to is the draft itself. States' rights may not sound important in this, but if the forces were raised at the State level, then maybe there wouldn't be so many votes for war. Oh, wait, they don't even bother declaring war anymore, and the Senators aren't picked by the legislatures, yeah, you can't go back to 1800...

Mr. Icepick, that brings me to what you wrote. Hey, I'm 16 out of 17 Amendments (didn't discuss the 10 in the Bill of Rights) into this thing, so I can't stop now. These posts are mostly to point out that most of these Amendments weren't very good ideas. Maybe the Founders shouldn't have put in the Amendment process. As you say though, they've been trashing it anyway, so without the right people you can't have a Constitutional Republic. Ron Paul needs to learn that, BTW.
Trotsky's Icepick
PS Constitution? Bwahaha! That is so cute.
Just a GD piece of a paper as Shrubya Bush said.
We are in the second Bolshevik revolution and that got thrown out as part of the Fundamental Transformation build the CCCP back better plan, comrades.
Plan accordingly.
Robert
PS: Mr. Ike. I quite agree with you on
"If I'm old enough to kill people for the US Government, I'm old enough to vote." Your limits on voting seem reasonable too.

Absolutely stupid reasoning. Young males are -- or maybe were, before they all got estrogen addled -- very good at reckless acts of bravery, team camaraderie with other males, incredible stamina and actual fighting. Stuff you want in soldiers.

Young males are NOT good at planning ahead, having wisdom about how the world works, and avoiding blatant appeals to emotionalism. All things you need from a responsible voting citizen. So saying "I can fight so I should vote" is nonsense. They aren't related at all.

The voting age should be 35 and anyone on any kind of government subsidy or who doesn't make enough to pay taxes should not be allowed to vote.
MBlanc46
PS Adam Sminth: Don’t give them any ideas.
MBlanc46
PS They did it because they’d had all those 18 year olds getting their posteriors shot off in SE Asia, and the poor buggers weren’t even allowed to vote.It didn’t do me any good. I couldn’t vote until I was almost 22 (1968j. The nitwits didn’t understand that it doesn’t take any sense or judgment to get one’s posterior shot off, but it does (or should) take sense and judgment to vote (although the value of voting is open to serious doubt). I’d raise the age to thirty for men. Women shouldn’t vote at all.
Adam Smith
PS: Good afternoon y'all...

Section 3. The Congress shall have the power to deny the franchise to anyone who can not pass a literacy test.

Without a literacy test we might as well extend the franchise to 6 year olds.

☮
Moderator
PS: See?? ;-}
ganderson
PS. I got to vote in '72 because of this amendment. Threw it away by voting for McGovern!