How to insert the Crazy Al shooting into the narrative

OK, "Crazy Al-Issa" to be precise. I would think that's what his friends might have called him, seeing as his full name is Ahmad Al Aliwi Alissa, or "Ahmed Triple-Al" might work. Of course, we Americans are supposed to be tolerant enough to know exactly how to pronounce these the RIGHT way, or else the immigrant may get very pissed off, black out, and ka-boom-yow! 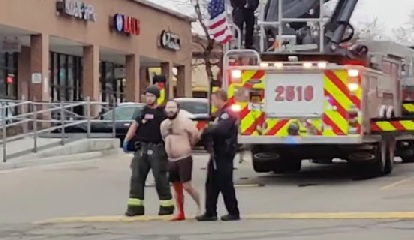 See, now the Lyin' Press has a really hard job with these acute stories, that is, ones that must be discussed with appropriate solutions right away. Hell, Peak Stupidity is on this one a coupla' days later, and the Lyin' Press outlets need to stay ahead of us. It's tough because you have to get the story out, at least within a few hours of the twitterers, facebookers, and instagramers, yet you need to know how it will fit into one or more the ongoing narratives too.

Sometimes, this rush to opinion, called more properly "the late-breaking news", causes fuck-ups. Actually it happens quite a bit if we all save Lyin' Press screenshots and keep their initial rantings in our memories.

Because he looks white enough, you know, with that un-suntanned pot belly and all, Crazy Al there in Boulder, Colorado was said to be a White Man for most of the 1st day of that story. That depends on the Lyin' Press outlet. If they don't pay their subscriptions for their Journ-o-list e-news, some (as per Adam Smith in the comments here) may stick with the evil gun-owner White Man Shooter way too long and look even stupider than the pack. (You don't want to do that - bad for career progression.)

Between the Atlanta mass shooting and this latest Boulder one, it looked like a real lock for the Establishment. The Lyin' Press department was doing its job diligently in providing infotainment that complied with the narrative of:

1) White men hate Oriental people because Donald Trump keeps using the phrase "China Flu", and it has riled them up enough now to shoot people willy-nilly.

2) Normal law-abiding sane White People should not be able to have guns. Look what happened. It was especially bad in the grocery store in Boulder, as unarmed people are sitting ducks, so there ... so there should not be guns ... cause .. that's, like, the only way to kill people.

What hadn't gone into the narrative in the infotainment being provided Americans was the sex-trafficking and illegal immigration angles of that story. These aspects were simply not useful. There's no there on TV there.

It was going well, but that freakin' Crazy Al fellow turned out to be Crazy Al-Issa instead. Dammit! Yeah, his friends and even his family saw him as a normally good Syrian-immigrant kid, a member of the wrestling team and all, who just went a little overboard in his anger on occasion. It was nice that he had an out, threatening to call anyone giving him too much shit back a racist or xenophobe.*

Man, that has GOT TO SUCK! You've got the news that you can use ready to insert into a couple of the big narratives, but one of your premises gets changed last freaking minute! This 2nd shooting didn't support narrative (1), because, unfortunately, there were no Oriental people in the line of fire that day, or the guy only wanted to shoot White People. If that wasn't bad enough, then narrative (2) couldn't use this story either. Yet, the story was already out there.

It was that stupid, stupid little piece of punctuation in his name, maybe an arithmetic operator symbol for those math-inclined, that came out last minute. No, it's not Alissa but Al-Issa. Who knew? Without that stupid dash that has something to do with being a Moslem Arab , we would have had support for the narrative through the rest of Spring! "Yeah, he and his family were from Syria, but that's Syria, Kentucky, pronounced 'Seye -Ray'", we could have told them.

It's time to just switch the whole story to GUNS! GUNS! GUNS! period. That's what you are going to hear and read now, people. The Lyin' Press has wasted a lot of their time with this story, already, but there's still that piece of "news you can use".

Really, readers, this is basically how the mass media operates in 2021. '

As for young Ahmad Al Aliwi Alissa, is he the guy Paul Simon was writing about in his 1986 hit You Can Call Me Al? The lyrics are a bit uncanny:

Holy moley, there's even a line saying "Mr. Beerbelly". I shit you not. Due to this blogger's chronic lyricosis, most of the lyrics are ones I had never known and could only have gleaned off the internet.

You Can Call Me Al and lots of the other songs on Paul Simon's 1986 album Graceland are not in the style of his older music written/sung as a single artist. It's just my opinion, but the best of it was his entire There Goes Rhymin' Simon album from more than a decade earlier (1973). He liked to experiment with different styles. I like the horns and sax, and I like this classic old music video with Chevy Chase:


* Peak Stupidity will have more on the immigration aspect of this mass murder in another post. ---

He doesn't often block my comments, I was a little surprised he didn't let this one fly. I had never tried reposting before like that, I guess I was just seeing if he was paying attention. Maybe I'll try one more time with this slight modification...

I know, right…
I’m still holding out for that sinecure as a diversity consultant…
CNN can go spatchcock a chicken…

I get canceled by Sailer every now and then. I think that after more than a decade reading and occasionally posting on the site I've never made it to the no-moderation list because he thinks he can't trust me to occasionally say things that are a little too blunt/unapproved.
He's probably right.
Cloudbuster
PS I have always liked that video. I remember when it first came out. The best thing about it was that in an era when most videos were ostentatiously "cool" this one was so good-naturedly nerdy.
Moderator
PS: Adam, it's got to be just that last line, of course. Steve Sailer is sometimes sensitive, not about cusswords in general, but just when their unusual ones that may sound sexual. I remember that I had one pretty good smart-ass remark (not an insult to him or any commenter, but to the idiot writer of is NY Times or whatever article. It has some bathroom reference, as I recall, and he whimmed it.

3 times, though, you say? I wonder if you can catch him at odd hours when he's skimming very lightly.

I'm not sure what all the civility of his is going to do for the country, but Mr. Sailer is very reasonable and lets a lot of stuff slide.
Adam Smith
PS: Good afternoon everyone...

Completely off topic...
Hey Achmed, I tried to reply to this comment three times but Sailer canceled it all three times, so I'll reply here...

Hey, Adam, CNN could really use a guy like you.

I know, right…
I’m still holding out for that sinecure as a diversity consultant…
CNN can go cocksuck a chicken…

☮
MBlanc46
PS Well, we know why this mope is in our country. He’s a very small part of the Great Replacement, by which Those Who Rule Us intend to increase their wealth and power exponentially. The questions are: What do we do about it? Is there anything that we can do about it?
Adam Smith
PS: Good evening Mr. Ike...

I agree wholeheartedly...
“Question 1: why is this guy and his family in my country?”
Question 2: See question #1?...

☮
Moderator
PS: 50 Ways, I dunno, the same stuff may happen, but if the Lyin' Press ignores it...? They want to have some Communist laws ready, when they've got a good story.

Yeah, the song said "Betty", Alarmist. I'd thought "Daddy", but then, I didn't have half the lyric right.

PeterIke, that's the next post on this.
PeterIke
PS
Question 1: why is this guy and his family in my country?

Question 2: there is no Question 2.
The Alarmist
PS

I can call you Deadie,
And Deadie you can call me Al ...
Aliwi Alissa

Yeah, kind of fits.
Fifty Ways To Leave Your Lover
PS Ever notice how this only happens when CPUSA demonrats are in office at the sulfur stench cess ridden swamp?
Hmm...so hmm.