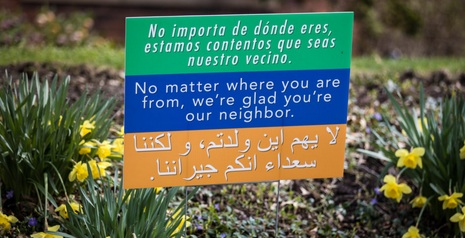 Have you seen the above signs? I have seen them here and there for at least a few years now, maybe since the time of Donald Trump's election. One was at a nearby left-wing church, made into a big banner hanging right next to the big "Black Lives Matter" one. I'm guessing, just guessing, mind you, that the city of Boulder, Colorado has more than it's fair per capita share of these welcoming signs.

Boulder is a big university town, with the University of Colorado in that nice locale right up against the front range of the Rocky Mountains. University towns have a larger share of the ctrl-left than anywhere else but Washington FS, New York City, and the big cities on the west coast. Why? The whole academic establishment has been infiltrated by the ctrl-left over the last 5 decades, and many graduates, especially those who don't find the professional jobs, are hangers-on that stay for life in their ex-college towns. They tend to be of the left too.

So these signs are all over Boulder, saying that the homeowner does not care where you are from, neighbor, in English, Spanish, and oh, what's that bottom one that's really hard to read? Now that's a weird-ass foreign alphabet. It ain't Russian, and they are definitely not Chinese or Japanese characters. Oh, where have I seen .... ahaaa, that part is in Arabic, welcoming the Arab newcomers to the Boulder area, from, say, Syria and places like that! No matter where they are from, they are great to have around.

See, the people of Boulder, Colorado, and the rest of us too, since the post-graduate degreed people there know what's good for us, feel bad that the United States had bombed the hell out of some of these countries. Over the years, they felt that we should let the poor refugees, from places bombed or not bombed, into our welcoming country. The people of Boulder are good, welcoming people. These new immigrants will be so grateful we accepted them from the country in which we may or may not have attacked, maimed, or killed their cousins and such. No, they won't hold a grudge when they get here, cause "Merica! Though almost all the people from the Arab world American invites to be our neighbors are Moslems, that should not be a problem. Diversity is GOOD, especially with religions.

There are highly-educated people, the welcoming folks in Boulder that put up these nice signs. They've thought these ideas through. There's no way that they would miss anticipating any problems, such as a foreign misfit going crazy and killing 10 members of the nice Boulder community. Right? 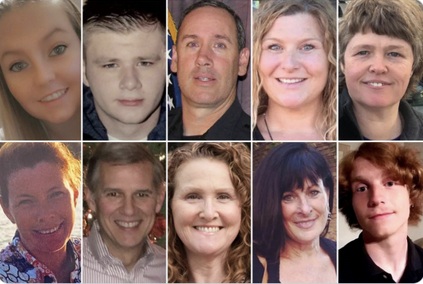 This was unanticipated! Some of these people may even have had their own welcoming signs, so how is it possible that they have been shot dead? It's not like the people of Boulder would have had access to VDare articles over the last 20 years. Even for the purpose of foreseeing further mass murders, the lefties of Boulder just wouldn't feel comfortable reading James Fulford's recent article "Another Muslim (Immigrant) Mass Murder". There are 22 mass murders by immigrants listed, with "134 actual murders, and about 1300 wounded. (9/11 isn’t on this list, for various reasons.)" Well, you can add 10 more White People of Boulder, Colorado, shot dead, to the list.

What's the solution? For the lefties of Boulder, it'll be putting up more welcoming signs for Moslems. That can't hurt, right, because for now, as the New York Times reports, as related by Steve Sailer, "Motive in Boulder Shooting Is Still a Mystery".

I am pretty sure though that there are at least 10 families in Boulder, Colorado right now that are just not that damned glad that Ahmad Al Aliwi Al-Issa was their neighbor.

Rainbow Stew Bubble Up
PS The glorious people's republic of Boulder?
Twenty miles of faculty lounge surrounded by reality is what Commierado (CO) natives call it.
The coexist Benetton rainbow utopia?
Pack up another choom bong and inhale harder.
Moderator
PS: Mr. Blanc, I can't say FOR SURE that these exact signs are in Boulder. I've seen them in a number of places, so I thought they'd be everywhere, as with the BLM signs. I've seen the "hate has no home" one, along with the "We belive:" ones. I'm sure Boulder has lots of some of these types, anyway.

Mr Smith, I just looked at your 1st 2 links so far. a) You are in a great area. b) that 2nd is very funny and I'll use that for another post.
Adam Smith
PS: Good afternoon again...

I'm pretty sure that Ahmad Al Aliwi Al-Issa was not a good neighbor...

“Given this history* and the fact that Al-Issa was an avid reader of mainstream media, questions now must be asked about his real motivation given that all the gunman’s victims were white and whether he was radicalized by anti-white racism that has been institutionalized by the press.”

*Ahmad Al Aliwi Al-Issa was known to his classmates as someone who had a very short temper and was prone to violence..

I have never seen one of those signs or those of the “Hate Has No Home Here” or the “We Believe” variety in real life...

There were a bunch of these on the lawns around here before the last selection...

☮
Moderator
PS: That I don't feel comfortable taking that bet, Peter, doesn't say much for the people of this country.
MBlanc46
PS I have not seen such a sign in my area of the Chicago suburbs. Perhaps they are a regional thing. What I do see are the “Hate Has No Home Here” signs. Not so much in my middle-class, upper-working class suburb, but in the tonier, railroad suburbs* to the south. When I see those, I know that hate has a home there: They hate me. Whilst I do fantasize confronting such people with their hatred, I really don’t want to deal with them. (Unless, of course, things ultimately devolve into a shooting war.) I leave the signs alone. Let the vermin signal their virtue all they want. But these Colorado signs are something else. They’re positive invitations to the invaders. Something should be done about them, and the people who post them.

* For those unfamiliar with Chicago and similar cities, the suburbs that developed along the (commuter) rail lines are generally older and have higher property values than this built further from the railroads.
PeterIke
PS
“I am pretty sure though that there are at least 10 families in Boulder, Colorado right now that are just not that damned glad that Ahmad Al Aliwi Al-Issa was their neighbor. “

Just wait. You’ll be nearing from the families and they will “forgive” him. I’ll bet a hundy that at least one family says it.