The real story of the week

I wanted to post this at the end of last fiscal-blog-week, but I got interested in the big ship in the Suez Canal and didn't get to it. We've said most of this before, so this will just be one more comment on what Peak Stupidity dubs Media Stupidity. It is really more a mixture of evil and stupidity, but we've got our URL, so we're stickin' to it!

Last week was Active Mass Shooter Fest Week, for the Lyin' Press' Infotainment programming. Hey, it got Americans to forget their Kung Flu panic and hysteria for a while, so there's that ... "Thank you, Lyin' Press - nice job! I couldn't take my eyes off the screen, even during our Kung Flu Anniversary dinner."

I refer the reader to this recent post with PeterIke's comment for an understanding of what the Lyin' Press is up to here. It's a big country. No, there aren't mass shootings every day, but there are plenty of incidents of violence, as Steve Sailer and the stats types notice that could be reported on instead or in addition, for perspective. The Lyin' Press can pick and choose whatever fits one of their main narratives. Once they pick one and make it part of their country-wide, often worldwide Infotainment, they have to pull out of the story only the facts, and give only the opinions, that go with one of their big narratives.


Part 1: White people HATE HATE HATE Oriental people, because Donald Trump has us WHIPPED UP, I tell you, from his saying "China Flu"! 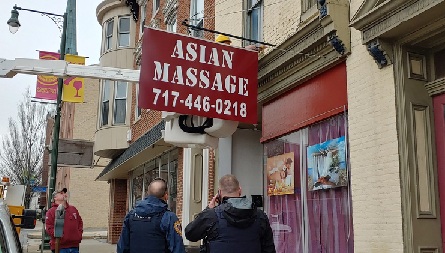 There was not much mention put into the story along the lines of "hey, Mr. Long did shoot two White people too. Could this possibly not be simply about his hating Oriental ladies?" How about anything about the entire illegal indentured servitude of people illegally in the country, worse yet, in an illegal business? Isn't that a big story? Women are being trafficked. I had been told that was bad. They are being exploited for hand jobs for, I dunno, what 50 bucks? (Just wondering is all.)

A commenter with the handle Trinity wrote a very good comment under a John Derbyshire post, here, with good insight about what might have been the true motivation of Robert Long. It involved the shady money dealings likely to be going on in one of these places, and Mr. Long's bad spot to be in if he had been "clipped" or just treated with disdain by the ladies. It's not like he'd go to the cops, out of embarrassment, if nothing else. (I think I will see if "Trinity" doesn't mind my posting his entire comment.)

There are some good, interesting, and important stories about society, not just Robert Aaron Long, underlying what happened in Atlanta, Georgia. The Lyin' Press didn't want anything to do with those stories though. They don't report, really - they just feed infotainment into the narratives. The narratives that the Atlanta massage parlor shootings story were "for" are GUNS! and White people hate Orientals!* 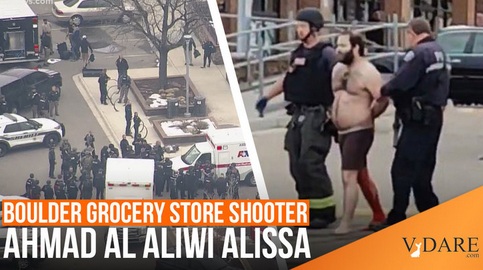 The Moslem connection was not brought up very much with regard to "Crazy Triple-Al" Al-Issa. That "Moslems as terrorists" thing is so 2002. That was just to scare us into enacting a Police State to protect our freedoms, is all. We're over there, see, fighting them, so we don't have to worry about fighting the ones over here, who are coming in droves now and love America for our welcoming and freedoms, except for last week ...

How about the mental case factor regarding they young Al-Issa? Were there any stories stuck in there in the Infotainment, maybe late at night after the important "guns are bad" stuff ,about what's changed with mental health since nut-cases were let out from State Hospitals into the streets 30-40 years ago? (See Outsourcing of the Funny Farms.) There were many people, including the guy's own family, who knew he was not right. What was the story about why people wouldn't speak up, again? Was it something about being railroaded and canceled for doing so? I guess I missed it.

There are good, interesting, and important stories about society, not just Ahmad Al Aliwi Alissa, underlying what happened in Boulder, Colorado. The Lyin' Press didn't want anything to do with these stories though. The narratives that the Boulder grocery store shooting story were "for" are GUNS! and "White people suck" , OK, just GUNS! now, as the latter got screwed up for them by that stupid detail with the shooter's Arabic name.

Here is what Peak Stupidity thinks is the real lesson for Americans of Active Mass Shooter Fest Week: There is the internet now. There is youtube (though bitchute is the near future) Many of us can get some news that's outside of the Infotainment world of narratives. Many more Americans have gotten to see exactly what parts of these stories the Lyin' Press includes and what they don't, and they often well understand the reasons for each.

I hope what Americans have learned from last week is that the Lyin' Press is just another department of the US Feral Government now. I will discuss that more in an upcoming post.


* I'm sorry, but I'm just not agonna write "Asian" when I mean "Oriental". Peak Stupidity has been over this before. Enjoy! errr, WARNING: Oriental Asian bikini picture..

Moderator
PS: BTW, there is a new Ron Paul column about bills in Congress on gun control. It's getting pretty serious:

https://www.unz.com/rpaul/second-amendment-in-the-firing-line/
Moderator
PS. Peter and Mr. Hail, it's been many years since I used to watch the TV news at night, right before Andy Griffith. They would show what they knew of any stories of violence, including pictures of the criminals when they had them. I don't know how it is now, but at the local level, they only have so many of the "if it bleeds, it leads" stories, so they show them all.*

The national outlets have many more stories to pick and choose from.

I'd like to get into that newspaper archive for my place, Mr. Hail.


* That is, unless you are the big city, like Chicago, in which there are shootings every night in the hood. At least most there know that's all in the hood and to stay TH out of the hood.
The Alarmist
PS

Even before I was trapped for thirty-plus minutes in the “It’s a Small World” ride at Disneyworld (hot day, European wife needed A/C), I always thought it would be funnier as a shooting gallery ... mount small guns on each boat and let people have at it.

Maybe the US needs to adopt the German custom of the Schutzenfest, and let guys and gals shoot up shit for medals and trophies throughout the year rather than taking things out on their colleagues once. I remember blowing up things in the Air Force being fun ... almost therapeutic.
Hail
PS

The US media DID used to do more-or-less what you describe, though shying away from any kind of histrionics about it.

A fun game is to find a newspaper archive you have access to for a city of your choice with some traces at least of demographics of a modern major US metro area. Take a half hour to read through that day's paper from "today's date minus one century," paying special attention to local news reporting.

A rewarding little exercise in its own right, this "News of a Century Ago" game lets the reader into a parallel world; the places and many of the basic structures are recognizable, but the tone is all different, like you've slipped into a dream-world. One can imagine how (or if) the same story would be reported today, what kind of shift in tone or emphasis.

One guarantee for those who 'play' this 'game' is surprises are in store, for inherited-history as we learn it is often not how it really was. There are some historical threads you can see with some kind of continuity to our time, but if you play a multiple-step game (news from the same place and same date 150, 125, 100, 75, 50, 25 years ago), there is clearly a major discontinuity in the middle 20th century in how things are reported. Not that anyone didn't know that.

It used to be that newspapers printed little "On This Day...years ago" sections from time to time, and presumably many still do. But today we have the ability to access the full papers ourselves, rather than an editor's ten-word, curated headlines. We can see it all.

(Another reward of this News of a Century Ago game is one regains one's respect for the profession of journalism, for it used to actually be based on reporting, rather than that which we have today.)
PeterIke
PS
Imagine if, just for a month, the media portrayed crime in all its reality and actual proportions. Screaming headlines every day: "Another white killed by Black(s)" (my capitalization is strictly woke). Numbers revealed with cute little infographics explaining "per capita." Every night, crying white families shown on the boobtube.

The entire mental state of the nation would wrench itself free from the woke sandbar it's currently stuck in (thank you, yes, it was quite clever of me mixing the Suez sitch into this comment).

People's entire world view would be shattered. I would even guess that a surprising number of insane white liberals would kill themselves, unable to cope with the reality that they've been duped idiots their entire life. They're emotionally unstable at it is.