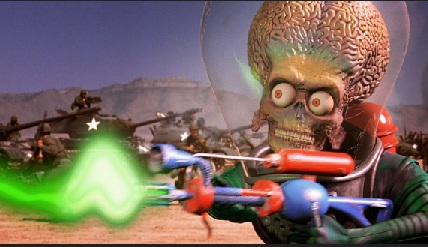 As is a regular thing lately, I'll look up a book or some old movie (most of the new ones are just too PC) based on the direct recommendation, or a just a mention, by an unz or Peak Stupidity commenter. Someone had an embedded youtube clip on unz with a scene from the 1996 movie Mars Attacks. I'd might have heard mention of this from a friend or maybe a character in Seinfeld, but I'd never seen it, so, I watched it recently.

Like Plan 9 from Outer Space or any of the classics mentioned in the great music in The Rocky Horror Picture Show, Mars Attacks is not supposed to be taken seriously. You watch it to enjoy how stupid it is. This one was, I'm guessing, made years after those early ones as a retro thing for those nostalgic for those old ones. I don't know my old movies that well, but perhaps some of them were not campy on purpose, but the special effects were so crude that they were unintentionally funny.

Mars Attacks has a slew of very famous actors and actresses of that time, most of them still popular today. I'm not a big fan of the Hollywood scene by any means, so it's not that I care that much who is in what. You will see just a slew of them though, most likely having a better time than in normal movies, as in this movie, stupid is good. That's had to be fun for them.

What I thought about afterwards is that this would have been a pretty good movie to see with kids. I can't remember any bad language or "adult scenes". (It beats the crap out of Rocket Man in that respect.) The little ones may think it realistic, but any boy over 9 or 10 would enjoy it, IMO. The Martians are stupid-looking enough to be cute, and their speech is made of nothing more that sounds akin to Mike Judges' Beavis laugh (or is it Butthead? I think Beavis.) The aliens put her little Chihuahua's head on the kidnapped TV reporter, Sarah Jessica Parker's body and vice versa, for another example of silliness. Yeah, the more I think about it, Mars Attacks is a great movie for kids of all ages.

That scene that got me to obtain the movie was place on the thread due to it showing this Grandma in the nursing home exclaiming joy when the Martians shot up the US Congress. "Right with you, Grandma. Yeah, I gotta see this!"

Anyone in the Lyin' Press watching? Now, those are what you call insurgents!

Then you are a scholar and a gentleman. Comic Book movies are a plague upon American culture.

I mostly view movies as a Director's art, so I tend to see movies based on who sits in the directors chair, although sometimes I am simply persuaded by the topic (Unbroken was directed by Angelina Jolie, so I didn't expect much, but it was surprisingly good). Spielberg was fantastically talented in the 70s - even his TV work was good. Peter Jackson is self-indulgent and dull. Quentin Tarantino is good, but a degenerate - I didn't see anything by him since Pulp Fiction until Once Upon a Time in Hollywood, which was actually pretty good, and - by his standards - almost wholesome. Ridley Scott is great when he's good, but mostly directs forgettable movies.
Moderator
PS: I didn't see "Independence Day" (yes, I know it was a blockbuster), but I would have been standing up cheering in the theater back then too.

Thanks for the info on the cards, Mr. Anon. I just looked up Tim Burton movies. Some of the weirder ones ("Edward Scissorhands" and "Ed Wood") were OK, I guess. I have no interest in "Batman" or any comic books made into movies, and I've seen Pee-Wee Herman, cause, you just did! I don't follow directors, but I will say I enjoy much of the Coen Brothers' stuff, and I seem to have liked most of the ones John Hughes made.
The Alarmist
PS

I was driving from Amsterdam to Geneva one evening, and for some reason a Dutch radio station decided to broadcast the audio of Mars Attacks. To this day, I don’t know why ... that’s the Dutch for you.

@Mr. Anon, I saw a trailer for Independence Day in a NYC theatre, and nearly everybody applauded when the White House was nuked (and that was in the Clinton era). Interestingly, several films came out in the Clinton years that portrayed a young, handsome, virile President either already widowed or becoming widowed and with a young daughter. Hmmm ... wishful thinking of the writers and producers?
Mr. Anon
PS

"That scene that got me to obtain the movie was place on the thread due to it showing this Grandma in the nursing home exclaiming joy when the Martians shot up the US Congress. "Right with you, Grandma. Yeah, I gotta see this!""

When Independence Day came out in 1996, my office mate at the time told me that, when he went to see it, about half the audience erupted in cheers when they showed the aliens blasting the White House with their death-ray.
Mr. Anon
PS

"If the Wuhandemic doesn't deliver the global soviet then Mars Attacks could do the trick. A dumbed down dullard telescreen addict society of perpetual spoiled children will love it."

I've recently come to suspect that may be a real thing. Global Warming (excuse me, "Climate Change") wasn't cutting it. The COVID Freakout seems to be doing the trick, at least for now. But I wonder if plan C isn't a (completely faked) revelation that "we are not alone" and that hostile aliens have designs on our planet. The blank admissions by the Pentagon and other official sources of things they "can't explain" is intriguing. They used to just summarily dismiss such reports as sightings of Venus, Swamp Gas, Etc. But now they publicly disclose such things and say - we're stumped, make of it what you will. Are we being set up for an alien invasion hoax? Say a bunch of government wallahs and assorted other "experts" were to tell us that we are being visited by aliens. Who is to gain-say them? Do you have any satellites? Any space-telescopes? Do you happen to have a space-shuttle handy to go up there and investigate it yourself? It would be the ultimate phony war. "It's war, Citizen! Do as your told! It's your patriotic duty as an Earthling!"
Mr. Anon
PS

Mars Attacks was a good idea, and I found it occasionally amusing, but ultimately I find everything by Tim Burton to be tiresome. I don't think he's a good film-maker.

By the way, the premise was based on a set of (notorious) trading cards introduced in the early 60s:

The scenarios they portray were even more violent, graphic, and over-the-top than what was in the movie. They also included the Earth counter-attack on Mars. It was a real cold-war thing. From that website, dig #13: an image of Martian civilians watching the attack on their TVs, while enjoying cocktails - shades of the various Gulf Wars and people watching the CNN coverage of it (back in 1991, I remember a co-worker leaving at the end of the day, saying "I'm going home to have a beer and watch the War").
Brawndo Tall Can
PS If the Wuhandemic doesn't deliver the global soviet then Mars Attacks could do the trick.
A dumbed down dullard telescreen addict society of perpetual spoiled children will love it.
We need a mutiny of deviated preverts. (Dr. Strangelove)
This just in from Slim Pickens as Major Kong-Yeee hawww!