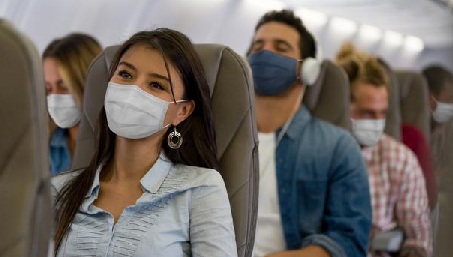 If you've done any airline traveling in the last 9 months, you may have noticed that they have gone mask-crazy. That is, both within the terminals and on the airplanes. A month or two ago, the Feral Gov't stepped in to make it a Federal Offense not to keep one of these stupid things over one's nose and mouth. I don't recall a big debate or anything - it's all "stroke-of-the-pen, law-of-the-land" nowadays.

Well, they've got their new procedures for boarding and de-planing now, involving somehow staying 6 ft apart during this process. (Hopefully, you'll have an early arrival.) They don't get into too much detail on how the 6 ft distancing is maintained as we are seated. Perhaps, 6" or a foot suffices once we are seated, due to reasons like "better airflow", no, more like "listen, we're just doing this stupid charade so we won't get fired, OK?"

Well, we were getting up to get off, nothing near 6 ft. apart, as no one is actually fearful enough of the Kung Flu to pay attention to that stuff, cause, flight connections. This one guy I had been chatting with for just a minute or so already said something like "I think they ought to do some anal probe on those people that don't wear the masks right." I thought "now here's a cool guy, not afraid to make a few low-brow jokes about this whole ball of stupidity." Alright. "Yeah, this whole thing is getting pretty stupid, huh? This whole mask thing is a joke and ..." "No, I mean they need to punish these people. They should wear them right or..." something.

That was unbelievable to me. This damn guy, who looked like a professional businessman, was serious. He thinks they should punish the mask-deniers by sticking things in their asses. I get shocked each time I meet one of these true-believing panickers.

MBlanc46
PS Humans are religious animals. Even the atheist philosopher Daniel Dennett acknowledges that. A solid minority, if not a majority, of Westerners (and, I suspect, East Asians) no longer find the anthropomorphic gods of traditional religion credible. Wokism is a substitute adopted by many. The Plague Panic is something like a Crusade for Wokists.
PeterIke
PS
BillH, you're right about Americans competing "to see who can display the most cowardice." I've noticed that most of the double-maskers I see are 30 years old or younger -- in other words, 99.9999% safe from Covid, yet determined to show us how concerned they are. In fact, they are actually suffering from oxygen deprivation and lowering their immune systems.

The other thing you see is a lot of that same age group putting masks on their kids. I have to say that most kids beyond baby age around here are masked. It's really pathetic: a four year old going by on a scooter with a mask on, while mom and dad are double-masked. Absolute insanity, and genuine child abuse.

Then you have those people who are "proud" to say "I haven't eaten at a restaurant for a year!" I went back the minute I could and happily sat indoors with no mask. But you do see some people sitting there with masks as they await their food. I'm happy to say most don't. And I am starting to see more people mask-less outdoors in nice weather. And this is New York City, woke-capital of the world. The ice may be starting to break, but there's a long, long way to go.
Bill H
PS Americans today make a virtue out of their lack of courage. It seems they actually have a contest to see who can display the most cowardice.
It's Got Electrolytes
PS The throwaway masks are chock full of bad stuff but the depopulation agenda comes first.
The dumbed down doped up dullard population of mommygov dependents will go quietly to the slaughter pen.
Ganderson
PS
Selfishly, I get to attend the NCAA hockey finals next weekend in Pittsburgh- severely reduced crowd and all sorts of restrictions- I’ll have to wear the face diaper, and I wonder if they’ll be serving food, but its live at least. Maybe that’s what they want, me being happy about crumbs from the table. Go UMASS!
PeterIke
PS
@Alarmist "I sometimes wonder if that is what the True Believers are wishing for for themselves."

Absolutely. There is a significant number of people who love, love, love Covid. It gives their lives meaning. They get to be morally superior scolds over everyone who deviates even slightly from today's orthodoxy ("one mask good, two masks better!"). They get to pretend they are overwhelmed with emotion because "Trump killed 500,000 Americans." They love saying that lockdowns are "no big deal if it means saving lives."

And 99% of them haven't missed a single paycheck thanks to the Rona.

I sometimes wonder if that is what the True Believers are wishing for for themselves.
Moderator
PS: Thanks for the comment, Peter. I'm sure there are plans for more things that the average American wouldn't fall for absent the idiot box, Apple "updates", facebook, twitter, and the like.

In the case here, my shock was the change from my initial impression that this guy had some common sense to the reality that he was another hysteric.

PeterIke
PS
"This damn guy, who looked like a professional businessman, was serious."

Oh yes indeed. The level of Corona belief among otherwise intelligent people is truly amazing. Millions of people submitted without a peep and without a single random thought of "hey maybe this isn't all they say it is." Since the Cathedral Meisters saw how simple and effective it was to get this level of buy-in, it makes me wonder what other stuff they're planning right now.

I guess they're already trying to get Asians to believe that white people are their #1 enemy. But that kind of thing has been going on forever.