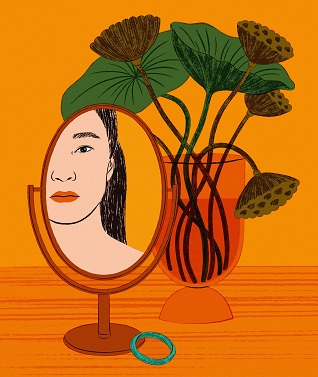 This self-portrait of one #SadBich is from her New Yorker magazine article America Ruined My Name for Me.

Peak Stupidity will continue trashing the stupidity of some Bichy writer in another post to follow the previous one. Firstly, this one is to discuss a point made by commenter Cloudbuster about the arrogance, ungratefulness and lack of imagination of the shoe on the other foot*.

Before I include his comment, let me insert this, seemingly some virtue signaling that Peak Stupidity is not racist, xenophobic, whatever, but no, that's not the case. The long-term reader has got to know that! This is more about the fact that I'd hate to have some certain people read this post and not understand. It's just the truth that I know a Vietnamese family that got out of there under extreme duress** in 1975 after the Commies had taken Saigon, ended up on a Philippine freighter, got rescued somewhere and ended up in Pennsylvania first. The family members that I am closest with are as American as apple pie in actions and views, one calling himself a Vietnamese redneck.

All of them, including that Vietnamese redneck, are doing very well, and have been since the mid 1980s. I know, I know, per Paul Kersey terminology, that's just IKAGO (I Know A Good One), applied by him to the black contingent. I am pretty sure that this Bich Nguyen is a real outlier in her ungratefulness.

It's not the case that this one experience has Peak Stupidity asking for lenience on more immigration from, well ANYWHERE. As we've written (see ) many times, assimilation doesn't happen with large numbers. No, we never needed ANY immigration, but a small amount would not have been particularly harmful. This Vietnamese family as part of that small number has been very good to know over the years. Some would say that due to America's war in SE Asia, it's only fair they come. I don't agree with that one either, as I think it's something that's being used as a most ridiculous excuse now, but that's another post...

I'll get back to them at the end. Here's is Cloudbuster's good question:

Wikipedia attempts to explain the pronunciation:

But the section ends lamely explaining

Cloudbuster has a very good point there. I can only write something with any knowledge about this linguistic question in regards to the Chinese. Without having had interaction with the Western world, the Chinese would be still be doing everything with those 3 to 10 thousand characters (3,000 is ~ the amount necessary to be newspaper-reading literate.) What we see written in "Chinese" with Latin letters is called Pin Yin.

There were a number of other deals like Pin Yin 100 or so years back. Pin Yin was like the VHS vs. the other Betamaxes. I thought "why didn't they make this easier for us? It's still freakin hard!" It was partly because they didn't interact with just English speakers, so it was developed to help Germans and whomever else. They have a number of sounds that are not particularly hard, like rolling "r"'s in Spanish or guttural sounds, but they have some that are close together. There are a number of sounds like c, s, sh, ch (more than those 4 though). Hence the stupid "x"'s in Pin Yin. Why "q" is pronounced "ch" is possibly due to the first reason.(?)

As for Vietnamese, rather than guessing, as I did in my reply comment, I got slightly less lazy and went to Wiki:

Some of these characters are also used in China; others are used only in Vietnam. Chinese characters were introduced to Vietnam when the Han Empire invaded the country in 111 BC. Even after Vietnam became independent in AD 939, the country continued to use Classical Chinese (Hán văn) for official purposes. In the 1920s, Vietnam shifted from traditional characters to the Latin alphabet.

This page has more.

The question remains for the names though. I mean, if they are moving here, why not just start freaking writing it the way that gets Americans to say it the way they want Americans to, as close as we can? Maybe Nguyen could be Nwin. That's not so hard. Make up your own Pin Yin style word that works.

Cloudbuster brings up a point I wanted to write about before, though I've covered it partly before. Let's put the shoe on the other foot. How do the Chinese say "Seattle", for example? I can tell you. They say See-at-too. That's the best they can do. Do you see me complaining? If I can't understand, tough shit for them.

On the other hand, when I was in China, I didn't expect the Chinese people to say my name "right". I was not about to Bich them out for trying their best, even if I had known enough Chinese to do so.

Learning languages is not my thing***. I don't think Americans should have to. That is becoming a real problem with Spanish, and it could be the same for large areas with Chinese people. As much as I agree with PeterIke, for one of the two groups covered in his law, the •Indians, at least they speak freaking English, in some manner anyway ... It's a travesty that there are job markets in the US other than translation jobs that require Spanish to enter. Chinese could be the next case, so then you can just forget it. "Come back when you know Mandarin, Round Eye", say the nice Chinese HR lady.

As for our pronunciation of foreign names, it's something we shouldn't have even had to worry about! We've all seen the reporters on TV, giving us the narrative in perfect English than saying "Nicaragua" in the perfect Spanish, well, as far as I know. They are so proud of themselves. Hey lady, I don't expect the TV station in Managua to say "Washington, Federal Shithole" correctly, OK? I don't CARE what they say down there on Nicaraguan TV, in fact. How about acting like an American and speaking in English. We say Nicaragua, and we say Seattle or Washington, FS.

Back to my friends from Vietnam, all of them took on Christian names when they came here. Some of the names were just pulled out of some nun's ass (they were all Catholic, of course), while, others like Ann for Ahn, worked out nicely. That's the way you at least try to fit in. Other Vietnamese people I've met have had first names that are at least easily pronounceable - a guy named Vin, for example. I guess it was Vinh, but well, there's Vin Diesel, so Vin is fine. It's not my problem if I can't pronounce it. Your family was a guest in the country, so act like it.

Back to the article from this ungrateful Bich Nguyen, she noted that her parents made her keep that given name. That took a lot of damn arrogance from her parents****, at least once they found out that Bich reads a lot, well, exactly, like the word bitch, which at some point their daughter or some knee-slapping Americans told them it means. Did they expect us all to not think this is funny, or add another definition in our dictionaries just for them, or was the Dad going along with Sue's Dad in the Johnny Cash song?

"Bic", "as in the lighter" (she could have said) or "Bick" would have sufficed just fine. Just GTTFC! Go To The Fucking Courthouse!

* Anyone got a good word for this?

** The Commies were looking for people with any English or French books, so they tossed all that stuff and tried to lay low. I think they knew that wasn't going to work in the long run, though ...

*** They are best learned young. Spanish is the easiest for most actual Americans. When I was much younger I took a 6-week "extension" Spanish class. The older lady instructor - an American - was so good at explaining the origins of words and grammar, to get it to sink in, that I learned so much in that short time. It's not completely about memorization. When people brag about their language skills, I tell them I know 4 or 5: FORTRAN, Perl, C, Basic... see, there you go!

**** From the pictures of this Miss Nguyen I pulled up, she is no spring chicken. Since she wrote that she left Saigon as an infant, a good guess would be that her parents left Vietnam around when the Communists took over. It really takes a lot of gall for them to want to keep all their cultural heritage after being let in to America to escape murderous Commies.

Ganderson
PS
One of the signs seen during the ‘91 World Series: Hey Hrbek- buy a vowel!

Alphabits was the nickname of the foreign exchange student in the NatLamp HS yearbook.

My daughter in law is Chinese- her English name is Janet.

Indians are the English of Asia- not all that attractive.
Moderator
PS: Ask the next guy if he wants you to contribute to his GoFundMe page to help him buy a vowel. (Unfortunately, Vanna White is not involved in this anymore.)
The Alarmist
PS

@Mr. Moderator, a lot of the Chinese women I worked with in Singapore adopted/used Western names, which made life easier for us foreigners. I’ve met a few Indians named Priti, and the name did not fit in most cases.

@Mr. Ganderson, you remind me of my Air Force MTI telling a guy with an unpronounceable eastern European name he was just going to call him ‘Alphabet.’
Always Uncivil
PS She could some put some fishnet stockings on as it worked for Jill Biden.
Shake it baby, twerk that thang. Oh not so much junk in the trunk? (big butt)
Newsflash for Bichface-airports, train stations, interstates, sea ports, helipads, are all open to leave mean ol' wayciss (gasp!) sexiss America.
Moderator
PS: Mr. G, we knew some girls that were taking college-level English in China. They each picked English names - Lillian, Carey, Suzie, etc. One girl dubbed herself "Sweetie", haha! (Too bad she was not hot at all.)
Ganderson
PS

In a previous life I taught at an international school in NYC. I gave all of my foreign charges American names, very roughly based on their own names. A kid named Ming became "The Emperor", Walid became "Walter", Aditya became "Adidas", Теодор was "Teddie", etc. There was a Turkish kid named Dogan Baruh- I dubbed him "Billy", from Caddyshack. It was all in good fun, and guess what, the kids liked it, too.

There's another point to be made here about the decline in nicknames- and the sensitivity of people about the way their names are spelled and pronounced- thoughts for another day, I guess.

I'd probably get fired today.
MBlanc46
PS My general rule for non-Europeans (and perhaps some Europeans) is: If your ancestors arrived here before 1924, you’re grandfathered in. I can deal with Wang or Kim or Matsumoto just as I deal with Kowalchuk or Mastrioni. If your ancestors arrived after 1924, you have to leave. I realize complete repatriation might be a tall order, but it should be the guiding principle.
Moderator
PS: Ha, I was about to write that one, Alarmist, but I just learned a bit one time and never used it.
The Alarmist
PS

I’ve learned a few languages, including PASCAL ... for what it’s Wirth.