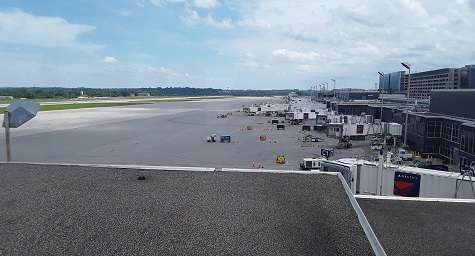 Back last summer, Peak Stupidity posted Pictures from the end of America. That one was about the desolate economic scene during the height of the Kung Flu summer re-panic. Because I had been in that great observation deck accessed* from the D Concourse at Minneapolis/St. Paul airport. I did speculate also about whether one could tell that the city was undergoing riots and the like, if I had been there the previous month. (The city is visible about 10 miles away to the north.)

Maybe because it's nice and quite up there, with not many passengers knowing about the place, and with the classical music playing, it's a good place for thinking, as just an hour or so up there recently resulted in 2 more blog posts. These are just your pretty typical anecdotal posts, and I am writing them in reverse time order, just due to wanting to write about this new black outrage thing first, then the lighter and brighter theme of the abating of the Kung Flu madness later.

One guy up there happened to be one of the few passengers who already knows about that observation deck. I got to talking to him, so he told me that, and that he travels nearly weekly and is from the local area. (I.e., he knows MSP very well.) This 65 - 70 y/o guy was in a specialty field as a technician, wanted as much as he wants to work. He told me that he gets paid by the hour, and that includes all the travel time, so often 50-60 hours a week at what I'm sure is a good rate.

We were up there watching the planes take off on runway 30R, as in, to the northwest, which had them rotating to get airborne a little prior, or just abeam us in this little tower. It was a great view. We're there talking about planes and talking about the amazing machines he works on. He's got to be a good guy, I figured. Besides a little bit about the masks, and that, no, I was not wearing one where nobody could give me shit about it, I saw no reason to talk politics.

On the SE side of the airport, across that runway, there is a Minnesota Air National Guard outfit with a dozen or so C-130s. We were watching the 2nd one already get across the runway, taxi down to the southeast, and take-off, when he asked wondered what they might be up to. "Probably just training or something", I said. "Oh," he surmised, "I think they are going to that Brooklyn Center thing ..." and something else. With his mask down on his chin, I should have understood, but then I am no news-hound, so I had not heard of the new outrage there, due the shooting of Duante Wright, another worthless black criminal. 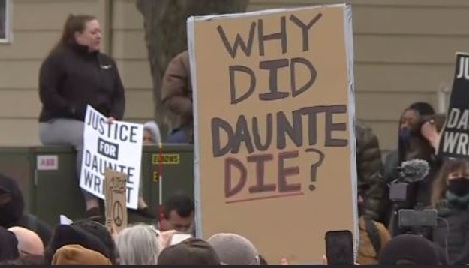 Well, first of all, what the heck would these lifter planes be going there for? For observation there are helicopters. Luckily, the current-era rioting/looting events are not up to the level that requires Puff the Magic Dragon AC-130 gunships... yet. Still, I didn't know what he was even talking about. "What's going on there?" I asked. "This black guy was shot by the cops." Ahaaa, well, here we go again, but I couldn't tell what he thought of it all. An older, white, technical guy like this ought to be conservative, by all rights. I didn't intend to talk racial politics, but just to set the record straight and for fairness' sake I noted "yeah, a couple of days ago, this black ex-football player shot and killed 5** white people, including 2 kids, down in South Carolina".

At this point this guy just clammed up like a ... clam, I guess. I was surprised. He had nothing more to say, for pretty much the whole rest of the time I was up there. I'm telling you, it's something about the Scandanavian-background folks up there or something. They can't believe that everyone is not so nice like themselves. OTOH, they can believe the white cops are bad guys though, but not those poor trodden-upon black guys that they've been lucky to never meet certain examples of in the wrong place.

** It's 6 now, as the other HVAC guy shot in the yard died at the hospital a few days afterwards.

Dieter Kief
PS Tom Wolfe's Back to Blood is a great tool to get parts of the social / mental reality chunks that form the basis of our public discourse.
I've recommended Back to Blood a lot, not least because Tom Wolfe is here at these roots of the Western societal crossroads (Robert Johnson/ Eric Clapton).
In Back to Blood he combines three things, that constantly bother our public sphere: 1) Deconstructivism/postmodernism as a root cause of the intellectual short-sihgtedness (=blue-eyedness) of the liberal mindset, when it comes to the hard part of race relations. 2) TV versus real world experience (lots of pages in the book dedicated to this subject: Just how deceptive it can be to see something on TV vs. seeing something in reality (this is a huge issue, because TV/film/video are now, what most people refer to, when talking about what's up***) and 3) Just how hard social reality can be, and how cruel, and: What it means to be in a fight with a rather big man - physical strength as a part of the race relations, that has quite some consequences. Not least because that is something that is completely neglected (that's part of the Freudian part in my musings). and that's true not least by the nice white middle class people, because their lives have overcome so to speak physical aspects of live almost completely - they don't have to bother with the physical aspect of reality any longer (something Klages and Nietzsche have looked into one or two centuries ago in depth already).

*** what's up is now what's up in the media - and that is not well understood, because the two things are not the same by a long shot.

(What I've written above can not only be applied to the Babbit-case, but even more so to the George Floyd case. That I'm the only one to point the visionary power of Back to Blood out in theses contexts is something that amuses me and - surprises me to to quite some degree, I have to admit. Steve Sailer is very well read with regard to Tom Wolfe, but even he - - - does not want o look at this treasure...I'm curious to find out more about this stuff, - and how it works).

My wife is calling for breakfast (she's read Back to Blood - and is rereading it right now).
Moderator
PS: Dieter, I was particularly referring to those "Minnesota-nice" (or other parts of the northern midwest) quality. You could ask our commenter Ganderson, who is from that area about them. They are just too gullible. Not all whites, even upper-middle-class types, are so clueless about the racial issues.

BTW, I have read your 3rd book mentioned, Wolfe's "Back to Blood".
Moderator
PS: Adam, I'm on an apple device right now - I can't seem to do anything with it on this. I'll check the metadata(?) later on the regular computer.
Moderator
PS: Adam, I do remember learning about images from you on that previous post. I will keep that post in mind for info and the links to the info inside, if it's available.

Looks like https://imgbb.com/ does not strip the data out of the jpgs.

Dieter Kief
PS
Mod, you write: "They can't believe that everyone is not so nice like themselves. OTOH, they can believe the white cops are bad guys though, but not those poor trodden-upon black guys that they've been lucky to never meet certain examples of in the wrong place." _ I think you got it almost right. What you don't get is how far away from the social reality of the - poorer folks, te average middle class white person is. - They are looking from afar at these ratherr depressign scenes these white cops are in and see hardl anything - but the whiteness of the cops. Then they get terrified. Not least about reality itself. And when they look for an explanation, all they can think of is the one detail they did for sure perceive from their far away observation point in the safe distance: The whiteness of the police officers.
One more little detail: They don't think of reality as being problematic or dangerous or dirty any more.

(what makes these things almost completely impenetrable is, that in the head of those who watch such scenes, all of what I wrote above (and quite a lot more) happens very fast and - develops in the heads of those who later talk about their experiences very fast and shows mental pictures (frames...) we all know already.

People like it that way. They've the impression, to experience something dangerous and - to tame the beast right away, so to speak.
Bottom line: Deception as strength. Social decomposition as control. Illusions as a stand in for reality.

(For a closer look on such things: The Anatomy of Human Destructiveness (Erich Fromm). And: Culture and its Discontents (Sigmund Freud) - and: Back to Blood (Tom Wolfe).
Adam Smith
PS: Looks like postimages strips some of the data out of the files...

Getting tired, will do better tomorrow...

I hope you all have a good evening...