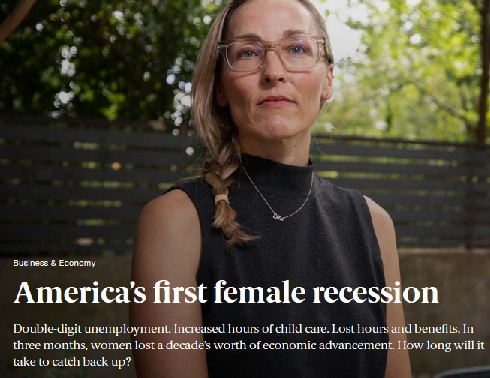 Feminist writer Chabeli Carrazana, author of the 19th News*, had such an all encompassing work of feminist stupidity that we spent 7 months here sporadically fisking it. (Amazingly, the article, America's Kung Flu Recession is still up.)

One can refute every detail of an article like this, as we did. Is it a waste of time? Yes, most likely it's a waste of time. What a Conservative can see in this article and others like it from feminists, is that it's not so much the small points that should be argued, but the entire premise that all Miss Carranzana's arguments are based on. That premise is WRONG.

I don't need to know the numbers of women vs. men employed in this field or that one. Though it's simple logic based on men's vs. women's working habits and preferences, the differences in pay aren't something I need to argue either. I don't need to argue over whether men are doing as much "caregiving" as women. No, the whole premise that women have equal roles as men in society is simply wrong. That's the basic argument against the whole damn rotten field of feminism. When you get into those arguments on the details, you have already left this basic idea behind and are accepting the erroneous premise of feminism.

Let's get to the root of the issue, call it "Roots Conservatism". Most Conservatives are afraid to go this far. They've been scared for a half a century to bring up the simple "yes, you ARE a baby-making machine", and "yes, I like it better when you're around the house a lot", and "yes, our kids will be better off if you are home with them". It's really been more like 55 years, since the middle 1960s, during which this wave of feminism has been trying to obscure or strangle the roots conservative argument that men and women are simply different and made to have different roles in life.

Now, I've heard there have been various waves, actually, and we are on wave 3 or 4 of feminism in America. From my knowledge of American history, it's been since the middle 1960s though, when feminism started being taken seriously, by men. (However, it still had it's fun moments in the 1970s.) Men didn't put a stop to this nonsense, and they, along with the women, have been paying for that mistake ever since.

Chabeli Carrazana based her whole long whining article on the usual "I want it all" and "can we have it all?" business, meaning having a rewarding career, as (only some) men do, and raising a family too. They have been brainwashed for those 55 years that they DO want that, and they deserve that. The whole idea that "having it all" for a woman might not even mean that takes wisdom to understand. That wisdom is something that will not come to most of them until it's just too damn late. (At that point, they want to argue, that, yes, we can have kids at 45 years old - no problemo!)

I will put that excerpt by the Unz Review commenter in the next post, in which there will be more philosophizing on the subject of the stupidity of feminism.

* You know that's trouble, as that on-line magazine's name refers to the US Constitution's 19th Amendment, if not necessarily THE biggest fuck-up of the amendment sequence, it'd be in the top 5 with a bullet. See Part 2 and Part 3 of Peak Stupidity's take on Amendment XIX.

“I'm not sure how it would go if I gave her links to the 9-part fisking herein!”

Well, I guess there's one way we could, possibly, find out.

“just a Corgi”... When you started this series many moons ago, I read in miss Carrazana's twitter feed that she is a bonafide dogmom. I couldn't find that tweet anymore. Maybe she flushed it now that some people make fun of dogmoms.

“"how I met your mother stories". Nah, probably not.”
Maybe, but I too kinda doubt it.

Mostly off topic, but sorta not because cubans living in Miami...
Have you seen the Baker and the Beauty on Netflix? I'm usually not into such shows, but this one was easy to watch.
I have a mild infatuation for Noa Hamilton. Maybe it's her accent.

☮
Moderator
PS: Thank you, Adam, for digging in a tad. I have her site up. I'm not sure how it would go if I gave her links to the 9-part fisking herein!

I see she was born in Cuba and is married, but with no kids, just a Corgi. She is a proud Gator, so I'll give her that. If neither of us were married, maybe an exchange between us could have lead to more, you know, one of those really cool "how I met your mother stories". Nah, probably not.
Adam Smith
PS: Good afternoon Mr. Moderator...

I applaud your dedication and tenacity. Miss Carrazana should feel honored that you spent so much time and creative energy on this fisking. Maybe I should send her a link to this series and perhaps we'll see if she appreciates your commitment as much as I do...