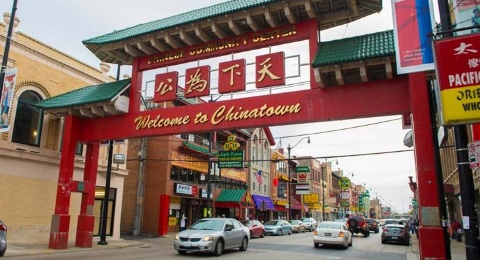 This was quite a while ago in one of the Chinatowns in New York City. They've got the real Chinese food if you like that sort of thing. My wife does. It's a tad healthier than the American style "Chinese Food" with the added salt and sugar, but then I'm still partial to Panda Express and Wok n Roll.

In these place full of non-assimilated Chinese people, one would not know he isn't in China but for the vehicles and lack of smog. You might think "when in Chinatown, do as the Chinese do". What the Chinese people DON'T do in China is tip for anything. It's just not common practice at all, or at least wasn't last time I was there (over 3 years ago).

Therefore, my wife figured "no, you don't need to give them a tip", on our $12 total breakfast. I was about to lay down 2 more bucks, not a lot, but at least cash, and "Cash is King"*, and was especially for Chinese people back then, before they were Harmonized**.

"I see they are Chinese, but this is New York City. It's still in America, and so they expect us to give a tip." "No, I'm pretty sure these Chinese people don't expect a tip. In China they don't, so ..." She was insistent about it. Rather than bet her money, which I've done before, I just gave up. "OK, fine."

We got about 20 yards out the door before one of the Chinese women caught up with us. "Wait, you have to tip!" Well, first of all, I don't HAVE to tip - that wasn't at all my point. I played along. "No, but you're Chinese right? Chinese people don't do tipping." "This is New York, not China! You have to tip, you know." "It sure looks like China, and it's too late now. I'm not giving you squat."

"That's too bad.", said my wife, as we walked off, "I wanted to eat later at that other place down the street, but these people know each other. They'll spit in the food."

MBlanc46
PS No, different guys. This Brett Stevens runs Amerika.org. He posts a lot on Gab. A bit of a nutter, but he’s sometimes amusing.
Moderator
PS: Mr. Blanc, are we talking about the same Bret Stephens (differnet spelling?) that Mr. Sailer just wrote about in a post today, in which the guy was channeling iSteve in regards to the cop/black shootings? Commenter have already noted that they don't appreciate Stephens' stance on immigration stuff.

It's funny how "Art of the Deal" guy Donald Trump was so bad at doing deals during those 4 years. I never heard of him starting from a hard-core position. He got rolled, if nothing else ...
Moderator
PS: I've heard about Americans being suckers for that in Europe, Alarmist. In China, there really was no such thing, and, at least 10 years ago, and to some degree 3, restaurant food was still very cheap when compared to the exchange rate. China has had a lot of inflation though, since.

One thing in China, is that they would charge you 1 RMB (~ 15 cents) for a small pack of extra napkins, but they were basically tissues, not good for too much. Over the centuries, that overpopulated country has taken down all the decent forests, to a degree anyway. I got the feeling that paper and lumber have not been easy to come by for a long time. What goes along with that is Chinese people do not know how to take care of good wood. ("Oh, just paint that" .. oak table. Sheeitt!)
MBlanc46
PS As Brett Stevens says, “They all have to go back”. I know that there’s precious little chance of that happening, but that should be our starting position.
The Alarmist
PS

Could be like the Italians, who automatically fold the tip into the bill through a couple mechanisms ... you think that bread was free? "Pane e coperto" is a compulsory charge for the provision of bread and table. I’ve even seen Italian joints in London who add that to the bill, and my American colleagues who already tip too much anyway merrily tack even more onto the bill rather than do the customary rounding to the next quid.