... yet what does the alt-aight care about "muh Constitution? From everything I've read of Nick Fuentes and his leadership of part of the alt-right movement, he seems like a good guy. What I'll ask later on in this post is, have these young non-principled Conservatives not helped bring this type of thing upon themselves?

VDare's Washington Watcher II, one of my favorite writers on there, uses mostly a series of tweets to report America First Patriot Nick Fuentes Put On No-Fly List.

In case you don't know him at all, Nick Fuentes became known as leader of the "Groypers" (don't EVEN ask me what the name means), a college-age alt-right group. This group has greatly influenced the university so-called Conservatives, after a political battle with Charlie Kirk and his "Turning Point" college network. He's been on the good side of the immigration, culture, and anti-white issues vs. the wusses of Turning Point.

Because of his much-too-truthful views, Mr. Fuentes has been banned from all types of "platforms", media, electronic payments, AirBNB, what-have-you. Per Washington Watcher II:

Fuentes believes he was put on the no-fly list due to hysteria over the Capitol protests. He has suffered numerous bans since January 6.

This first tweet shows what the Big-Gov/Big Biz coalition (often called Facism or Crony Capitalism) can do to an political enemy.. for now: 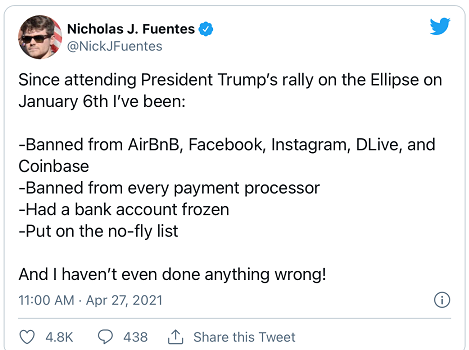 I believe Nick Fuentes here. After all this, I hope he's learned that if you get cancelled in this way by the Establishment, it's best to have very trustworthy friends. I also can't help here but think that these young people have put all of their eggs in the "TECH" basket over the last decade or so.* The Millennials I run into all seem to think that using cash is inconvenient and a practice from the Stone Age. Additionally, as Peak Stupidity has complained about numerous times, such as in Are the Millennials Retarded?, they do not seem to get the idea that I may not want to give out my life story to buy a voltage regulator!

I have something to say about that last item, Mr. Fuentes' being put on a (the?) "No Fly" list. This is the explanation from Mr. Fuentes of what happened back in December of last year, as he tried to travel on American Airlines: 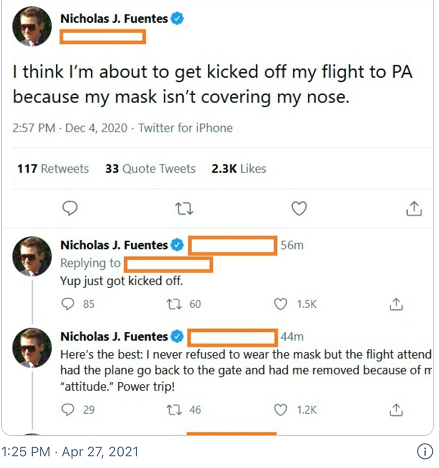 Don't ask me to explain the order of things. Tweets often confuse me in this way.

OK, so now we get to the Kung Flu stupidity again here. What CAN'T the COVID-one-niner do, for anyone desiring a good old-fashioned Totalitarian society, at least? I've run into much of this business on the airliners myself. Because the Feds passed some ordinance, law, or whatever they call Executive Orders now, in February, as I recall, that mandates the wearing of face diapers on the airliners AND in the terminals, the airline management is relieved, while the gate agents and flight attendants have had to become even more Totalitarian to keep their jobs. The nearly 2-decades-running Motherland Security TSA stuff is one thing. As we noted early last summer, well before the mandate, airport terminals are reaching the COVID / TSA twin peaks of stupidity.

Mr. Fuentes ran into this before the Feral mandate, but the airlines were already well down with the PanicFest (season 2). From my experience, some airline employees have been taking their Totalitarian additional job functions more seriously than others (whether due to being true hysterics or being more worried about their jobs, I don't know). I don't think that NIck Fuentes was put on that "potential terrorist" No-Fly list that the horrid agency called the TSA maintains, just going by his tweet. I figure that it was a policy of American Airlines, as when a plane has to taxi back to the gate to kick someone off, that will kick off some management decision, one possibly predetermined as Kung Flu PanicFest policy. I give Mr. Fuentes kudos for raising hell though, but this part explains the next.

Much more recently, Nick Fuentes tried to travel from Chicago to a press conference down in Palm Beach, Florida on the airlines recently, as he really couldn't communicate worth a damn in any other way than in person, being banned from everything but pay toilets. Per a short video clip by Mr. Fuentes in this Occidental Dissent article, he tried to book both American Airlines and United Airlines flights and was told they couldn't, and the TSA hinted he was on this No-Fly list. Yes, this IS the kind of thing you would have expected in the old USSR, Red China (had they had enough airliners to matter), or Cuba (ditto) last century. History is rhyming, with a century as the timing, and we keep saying that, over and over... 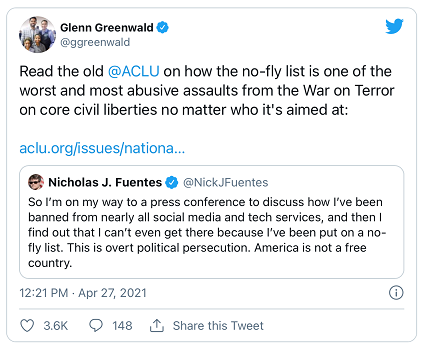 I give Glenn Greenwald a pass on what I'm about to say here. Though still somehow a deluded old-time lefty, he is a courageous stand-up guy, as evidenced by the Ed Snowden affair.

Maybe Nick Fuentes himself is even a Constitutionalist and not the typical Millennial in this respect. I don't know all he's said and written. I seriously doubt it though. In general the American young people have not been supporters of Constitutionalism and rule of law. They lean Socialist, as in "the government can do anything, but we just want it to do more for US, as Conservatives", or something. All I hear is the disparagement of "muh Constitution" and real limits on the Feral Government. Young people did support Ron Paul quite a bit in '12, but that's almost a decade ago. The government schools have been raising even more deluded Socialist Snowflakes, who are now maturing, or at least getting ripe.

Does Mr. Fuentes' Groypers group advocate for smaller government, the abolishment of the TSA and the NSA, DOE, IRS for that matter, the ending of the LOCKDOWN/face-diapering and other Totalitarian measures, and the termination of Dr. Fauci with extreme prejudice, in addition to their alt-right issues? You know, young people, that the Establishment doesn't have to defeat you in political debates for you to lose. They can just do what Totalitarian, and now Orwellian societies have always done, but often only dreamed of doing: banning you from financial transactions, banning you from traveling, banning you from communicating, and just plain un-personing you. You people never understood the reason for, and never supported, the basics of liberty, as laid out by the American Founders. Just what the hell did you expect was gonna happen?


* I'd say since smart phones, or maybe the original iPads, so maybe 15 years even..

PeterIke
PS
It's amazing how in about 100 days Team Biden has put multiple things in place to give us a genuine STASI-style East German government with spies everywhere, both human and technological. It's on the way to being formalized.

Unlike the lucky denizens of East Germany, however, who were fortunate enough to have a "no entry" policy and at least kept their country German, we're being flooded with "new citizens." We can't say "illegals" anymore, now can we?

I can't even get angry anymore at the daily outrages. It's just become amusing. Anyway, the depredations of the New York idiot club -- the Dueling Bozos Cuomo and DeBlasio -- has a more direct impact on me. The only change coming will be whether our next Mayor is a 100% Progressive lunatic or a 98% Progressive lunatic. What a choice!

Advocating for small government has never done any good. The left and big government just keep growing in power. Ideally we could use the government to crush the anti-white left but that's not gonna happen anytime soon. I don't see any solutions besides a general strike, which is never gonna happen. I am so black pilled
The Alarmist
PS

I pay for pretty much everything with cash.

TSA is just a training camp for the gulag guards.