Fighting the Lies on Unz.com

It's not like there aren't about 10 posts on deck with images all saved and ideas ready to expound on. Why I have been spending too big a portion of many days on the Unz Review is that it's easy to make comments on, the articles are indeed controversial as Ron Unz touts, and there's the usual: I've GOT to get busy. Someone is wrong on the internet.*

Though I spent a good while trying in this effort, writing in under Ron Unz latest American Pravda series column, this one called "The Truth" and "The Whole Truth" About the Origins of Covid-19 (Hint: the title is bullshit.) It's more on Mr. Unz's "The American Deep State did COVID-one-niner" origins theory. Hey, the guy has done some great dives into history before, coming up with some very believable theories, especially regarding Euro and American politics of the beginnings of Communism in Russia and the World Wars. That's all important stuff. However, his circumstantial-evidence-based hokey theory on the origins of the Kung Flu has been a sorry job, IMO, showing the lower range of his supposed 214 IQ, along with displaying his Kung Flu hysteria. I just realized that Peak Stupidity covered all this nicely in Where have you gone, Ronald Unzio, ... 3 months back, so I'll stop here. 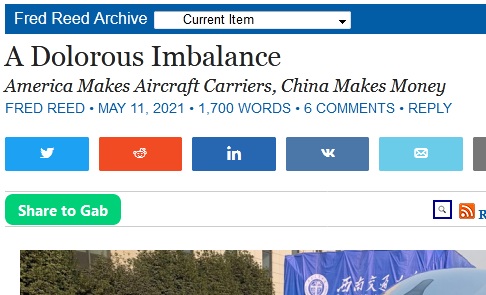 I will now segue into explaining my spending another 20 minutes writing back to the former curmudgeonly gonzo-style journalist, now less-than-worthless** Fred Reed. He has another column up touting all things China. No doubt, the amount of engineering and technological progress going on there is amazing, especially in the transportation industry. However, what I get from this column, a few previous ones' from Mr. Reed and Ron Unz's column mentioned above is that there is just plain anti-Americanism that is starting to piss me off.

You got problems with "our" Feral Government, the education system, racial stupidity? Hey, I'm with you. There are thousand of things to criticize. These two guys are all about "Americans just suck", period. Regarding Fred Reed, I'm guessing it makes him feel a lot better about having bailed out to say that his old country sucks in every respect. As for Mr. Unz, it's not so pervasive, but his Sinophilia, with no background of actually seeing China and no Chinese sources, is more a way of showing his anti-Americanism than anything. Mr. Reed, however, went for a 2 week vacation, so he knows everything.

I wrote a long comment to Fred Reed that one can see there. I spent the time in order to correct the record. Why bother, besides the reasons of more traffic to PS, as explained**? That gets to the title of this post.

All that has gone down in the ruination of America is not known all around the world. Even a majority of Americans don't know very much of the story. We are dealing with people, in China for example, that see the US as it is today only. They have never read any history, and besides the much fewer Chinamen that have spent time here in the old days, let's say pre-1995, they have no experience with the old freer, whiter, can-do America. I just bring up China because I read asinine comments from overseas Chinese commenters that, well, aren't really so asinine if you know only today's America, and as learned about from the NY Times, CNN, and sometimes people like Ron Unz and Fred Reed.

It's sad knowing that all the good in American society through our history and even in many of the people in current America may never be known about in the future. History is written by the victors, they say. I can go on for hours a day correcting the record on unz comments, with even Mr. Unz not knowing his country worth a damn - the guy just doesn't get out much, obviously - but is there a point to it?

I now know how regular Russian citizens in the USSR, your average German under Hitler, or many of the more intelligent Chinese people during their Cultural Revolution felt. Much of the world hates your country because of what the people in power have been doing.*** You have not been able to stop them. You know there are lots of good people who want no part of the stupid shit that's going on, but they don't know about you. The world thinks you are all stupid or evil. They want your country destroyed. If that happens, they will never care afterwards that you were there fighting all the stupidity and evil your whole life.

It really doesn't help to have assholes like Fred Reed lie about the history that has gotten America to this point.

* There is a good cartoon with this joke, which I'll find easily and use for another appropriate post.

** Why do I bother reading and commenting?, you may well ask. I have seen more hits from links I've put under his posts than any others. He must get read a whole lot, is all I can figure. I want to get traffic on here, and this is one way. That's all - I'm pretty sick of the guy.

*** In our case, I'd say only for the last 3 decades, in the extreme sense, with the beginning of the ruination going back just over a century.

Moderator
PS: Alarmist, I like your proposals for the Congress Critters. I would not say China is not A problem, but it sure isn't THE problem.
Moderator
PS: You make good points, Robert. I don't know if the Articles of Confederation would have been enough to allow defense of the whole set of States* to attack (early on, it would have been the British again). Would the States have stuck together?

Even the Constitution did not provide for a long-term standing army, per Article 1, Section 8 (Section 8, right? Remind you of M*A*S*H?): "To raise and support Armies, but no Appropriation of Money to that Use shall be for a longer Term than two Years;" The Navy was to be permanent.

I agree that militias along do not allow for the warfare "fight them there so we don't have to fight them here" BS.

Yes, if we laid out all our grievances as the Founders did in the Declaration, it'd take a couple of reams of printer paper.


* Actual States by the real definition that has been lost as applied to the current American States. (The term is used the same as for "province" or "prefecture", because people don't get it.)
Robert
PS: Mr. Alarmist, It's been many years since I read the Anti-Federalist Papers (The Anti-Federalists did not like the Constitution that our Dear Moderator so loves), but I believe their primary objection was to the possible raising of a standing army. (Taxation was another biggie, and both sides at least pretended to be against a Central Bank.)

Other than probably not being able to pull off the Louisiana Purchase under the older Articles of Confederation I don't see anything good that came about from that so-called Constitutional Convention (which had only been authorized to revise the existing system, not create a whole new one).

I'm sure that we could defend this once glorious Nation from invasion with a militia, and without a "professional" army it would be hard to do the invade the world part of the invade/invite the world so beloved by our betters.

P.S. As long as I'm here. The phrase "life, liberty, and the pursuit of happiness" is in the Declaration of Independance only because the former ideal for a government was to preserve life, liberty, and the protection of property. But the colonies were the Kings property, so that last part had to be changed.

If that Revolution was legitimate, then surely one would be today.
The Alarmist
PS

I forgot to include...

Former officers who retired, and are therefore still on the rolls of the US armed forces, who work in any capacity or company that receives public funds, would be recalled to Active Duty for a period of one year every five years until they reach the age of 76 (as in Spirit of ‘76) and deployed to forward operating bases in hot zones overseas in command capacities commensurate with their authorized grade, and would still be required to join armed patrols outside “safe zones” at least twice weekly to “show the flag.”

This last one was how I would have dealt with the retired generals who penned the letter telling Trump he must not use troops to quell the Burn, Loot & Murder riots last year, but it’s also good for keeping the Double Dippers grounded in the consequences of their greed. Skin literally in the game, so to say.

Yes, I’m all for going Roman Republic.
The Alarmist
PS

What, defend the United States? That’s so Twentieth Century.

Isn’t it Orwellian that the US renamed the War Department to the Department of Defense right about the time it stopped defending America and started waging offensive wars around the world?

There’s nothing so wrong with America that couldn’t be fixed be reinstituting the draft (for all genders) and sending their asses off to one our current never-ending wars to experience their government’s stupidity up close and personal rather than paying talented mercenaries lucrative sums to make it look like Uncle’s boots on the ground are minimal. We should also require Congress Critters (House & Senate) to spend their first two years in office as front-line platoon leaders, with no “green zone” to hide in.

China is not the problem ... it is American citizens and their leaders being almost totally detached from the consequences of their stupidity and, as PCR oft says, their insouciance.
Moderator
PS: I couldn't think right off of another big point to add to your great 5 points, Peter. Oh, here's one:

Control the US Southern border, add more immigration officers at all airports with international flight, and add more customs officers at the container ports. (Oh, it costs more money to inspect everything? Tariffs can cover it.) My point it that the legal methods of entry don't cover it all.

Your (3) covers it, but I'd still add (7) Have serious visa entry/exit control, as, of course, China does.

Re: Mr. Unz and his "Ft. Detrick, squalk! Ft Detrick!" story. He's doubling down in the comments about it. There's no way the man will EVER admit that it is pure speculation and that he's been wrong. To me, the origins of the Kung Flu are not the big story. The big story is how a PanicFest was deliberately created in order to increase the Police State.

I came THIS close to writing one more reply to him, but, ahhh, I think he'd try to ban me if I wrote what I was just about to write ... pretty much my last paragraph but with more disparagement.
Dieter Kief
PS - Peter Ike - your last line is irony of the rather dark kind. yin AND yong / in one song
PeterIke
PS
Is Ron U contending that America released the Rona to harm China's economy? If true, that's a pretty damn stupid way to go about it. Considering how many very easy moves we could make to hurt China.

1. Cancel all Chinese student visas. Why are we educating 350,000+ Chinese every year and allowing them to take up seats in many of our best universities?

2. Cancel all Chinese work visas. Why do we allow Chinese nationals to work in our industries? OF COURSE they're spying.

4. Stop allowing Chinese to park money in American real estate. Don't allow them to invest in it at all. Force them to sell what they already own at a loss or confiscate it.

5. Continue and expand Trump's policies of targeted import tariffs. Start re-patriating one manufacturing industry after another.

You could come up with many more ways to hurt China economically. Releasing a virus is monumentally stupid.

Then again, considering our government specializes in the monumentally stupid, maybe it's true.