Ann Coulter on that Wuhan Lab 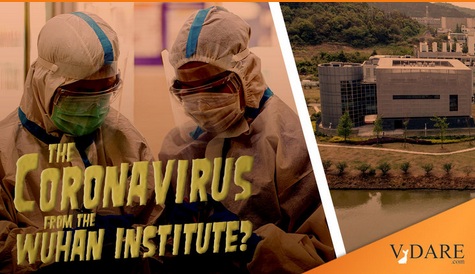 I guess it's not coincidental, Miss Coulter's writing of her latest column "I Will Not Be Scienced"—Experts Wrong, Covid Could Have Come From Wuhan Lab After All coming just after Ron Unz's defense of his speculation on the origins of the Kung Flu. A scientist named Nicholas Wade just wrote Origin of Covid — Following the Clues, which Mr. Unz referred to to support his theory (all it supports is that, yeah, the virus must have come out of A lab, not his beloved Ft. Detrick).

Mr. Wade's article is long but not difficult at all to wade through (get it?) either. Weirdly, I was ~ 1/2 way through when the article just disappeared. I had intended to excerpt some of it, but I may have to do that in another post. Here's the gist of what I read: Over a year ago, when the COVID-19 virus was noticed to have spread around Wuhan two scientists, one with a strong vested interest in the work in the recently-opened Wuhan virology lab, wrote opinion pieces with the backing of others, purporting to "settle the science" that the virus had NOT come out of a lab. Mr. Wade called the reasoning in both of these letters or statements, not scientific papers at all, "contrived" and explained in layman's terms.

OK, the article is back. While it stays up, from Mr. Wade regarding the first scientist (the one with the big vested interest):

Virologists like Dr. Daszak had much at stake in the assigning of blame for the pandemic. For 20 years, mostly beneath the public’s attention, they had been playing a dangerous game. In their laboratories they routinely created viruses more dangerous than those that exist in nature. They argued they could do so safely, and that by getting ahead of nature they could predict and prevent natural “spillovers,” the cross-over of viruses from an animal host to people. If SARS2 had indeed escaped from such a laboratory experiment, a savage blowback could be expected, and the storm of public indignation would affect virologists everywhere, not just in China. “It would shatter the scientific edifice top to bottom,” an MIT Technology Review editor, Antonio Regalado, said in March 2020.

Miss Coulter gets to the gist of the arguments, but I had a question that is answered in this paper, the question being right here in bold:

Why would anyone want to create a novel virus capable of causing a pandemic? Ever since virologists gained the tools for manipulating a virus’s genes, they have argued they could get ahead of a potential pandemic by exploring how close a given animal virus might be to making the jump to humans. And that justified lab experiments in enhancing the ability of dangerous animal viruses to infect people, virologists asserted.

Is it worth it? Why not try to avoid eating bats and rodents in the first place?

Dr. Baric and Dr. Shi [Dr. Shi being the lead Chinese researcher in the Wuhan lab, and Dr. Baric being a collaborator from UNC (Chapel Hill, N. Carolina)] referred to the obvious risks in their paper but argued they should be weighed against the benefit of foreshadowing future spillovers. Scientific review panels, they wrote, “may deem similar studies building chimeric viruses based on circulating strains too risky to pursue.” Given various restrictions being placed on gain-of function (GOF) research, matters had arrived in their view at “a crossroads of GOF research concerns; the potential to prepare for and mitigate future outbreaks must be weighed against the risk of creating more dangerous pathogens. In developing policies moving forward, it is important to consider the value of the data generated by these studies and whether these types of chimeric virus studies warrant further investigation versus the inherent risks involved.”

That statement was made in 2015. From the hindsight of 2021, one can say that the value of gain-of-function studies in preventing the SARS2 epidemic was zero. The risk was catastrophic, if indeed the SARS2 virus was generated in a gain-of-function experiment.

At this point the article goes into the specific research plan for this dangerous Coronavirus investigation as written for the grant, then describes some backtracking by the dastardly Dr. Daszak, and finally information about the state of safety at this recently-opened Wuhan level-4 virology lab with "BSL4 being the most restrictive and designed for deadly pathogens like the Ebola virus." Yikes! My skin is crawling just reading this stuff. (OK, never mind, just fleas...)

The Wuhan Institute of Virology had a new BSL4 lab, but its state of readiness considerably alarmed the State Department inspectors who visited it from the Beijing embassy in 2018. “The new lab has a serious shortage of appropriately trained technicians and investigators needed to safely operate this high-containment laboratory,” the inspectors wrote in a cable of 19 January 2018.

The real problem, however, was not the unsafe state of the Wuhan BSL4 lab but the fact that virologists worldwide don’t like working in BSL4 conditions. You have to wear a space suit, do operations in closed cabinets and accept that everything will take twice as long. So the rules assigning each kind of virus to a given safety level were laxer than some might think was prudent.

There ya go. Now we're getting to what this blogger has seen and understood from observations of China and common damn sense (too bad Mr. Ron Unz has neither). More on the safety aspect:

Before 2020, the rules followed by virologists in China and elsewhere required that experiments with the SARS1 and MERS viruses be conducted in BSL3 conditions. But all other bat coronaviruses could be studied in BSL2, the next level down. BSL2 requires taking fairly minimal safety precautions, such as wearing lab coats and gloves, not sucking up liquids in a pipette, and putting up biohazard warning signs. Yet a gain-of-function experiment conducted in BSL2 might produce an agent more infectious than either SARS1 or MERS. And if it did, then lab workers would stand a high chance of infection, especially if unvaccinated.

Much of Dr. Shi’s work on gain-of-function in coronaviruses was performed at the BSL2 safety level, as is stated in her publications and other documents. She has said in an interview with Science magazine that “The coronavirus research in our laboratory is conducted in BSL-2 or BSL-3 laboratories.”

“It is clear that some or all of this work was being performed using a biosafety standard — biosafety level 2, the biosafety level of a standard US dentist’s office — that would pose an unacceptably high risk of infection of laboratory staff upon contact with a virus having the transmission properties of SARS-CoV-2,” says Dr. Ebright.

This is a view he holds regardless of whether or not the SARS2 virus ever saw the inside of a lab.

Concern about safety conditions at the Wuhan lab was not, it seems, misplaced. According to a fact sheet issued by the State Department on January 15,2021, “ The U.S. government has reason to believe that several researchers inside the WIV became sick in autumn 2019, before the first identified case of the outbreak, with symptoms consistent with both COVID-19 and common seasonal illnesses.”

OK, there was nothing nefarious that went on with the loss of the page for a while, as it was probably just swamped with hits, but I'm too tired to finish it right now.

I'll tell you what though. I'm a little bit disappointed in Peak Stupidity's favorite literary pundit though. Ann Coulter:

One of Wade’s main points is that COVID-19 is the only coronavirus with a furin cleavage site. (You don’t need to know what it is—substitute the words “chocolate bunny.”) “So,” Wade concludes, “it’s hard to explain how the [COVID] virus picked up its furin cleavage site naturally.”

Whether the virus that destroyed the world economy and has already killed more than 3 million people came from a Chinese lab or a Chinese wet market, or a Chinese restaurant on the Upper West Side (unlikely), it’s China’s fault.

No, the contrived PanicFest destroyed the world's economy, or attempted to, and 3 million people?!! OMG! At 1% deaths yearly, just a nice round decent estimate, we have 70 million deaths yearly, so 3 million is 1/2 a month's worth of additional deaths. Hell, Africa can make that up in no time, if that's what you want.

What is mind-boggling about Wade’s article is the overweening and baseless pomposity of our high priests of SCIENCE.

That's a nice concluding sentence to go along with the clever title. However, I'm still disappointed. Ann Coulter's take still beats all hell out of Ron Unz's. It seems like we're all speculating. It helps to speculate with some common sense and experience. Mine tells me this:

- Quality is not Job 1 in China. That's not so good when you're running a BSL level 4 virology lab.

- Were a bad thing to happen, such as an escape of a deadly virus from a lab in Wuhan, the Chinese people would not likely come clean. Those that did come clean may have been terminated, and the rest would hide everything as long as they could for fear of the CCP, which would do it's best coverup from thereon. In the meantime, "Fort Detrick!! Squalk!! Fort Detrick!! It's the Americans who done it!!"

PeterIke
PS
I actually don't care at all where the Woooohan virus originated. It's a pretty catchy, rather feeble virus unless you're old, fat, or old&fat. The real problem was the response, not the virus. So who really cares where it originated. They could have run the same playbook for any virus, any season.

But they got those great psy-ops scenes early on from China, what with dudes in biohazard suits pointlessly spraying "disinfectant" into the air (was it really? or was it just water vapor?). And OHMYGOD people were being WELDED INTO THEIR APARTMENTS!!!!

And then EVERYONE IN ITALY DIED. So lock 'er down!

Gosh, it's been a fun 16 months or so!
The Alarmist
PS

It’s not weird that the article just disappeared while you were still reading it; anything that deviates from the approved CV19 narrative is being brutally suppressed as soon as it is disovered by the Keepers of Official Knowledge (KoOKs).

What’s all this about fur in cleavage? I prefer my women shaven or waxed, thank you.

There was an infamous pornographer, Al Goldstein, who had a late-night TV show on Manhattan Cable, and one of the running gags was that China was going to bury the US in takeout Chinese menus (if you lived in a non-doorman building in Manhattan, you’d get the joke, as you invariably had to climb over a stack of competing chinese restaurant menus just to get through the inner door to your building). I think that is still a more plausible scenario that the WuFlu making the jump in a wet-market or bat-serving restaurant.

Not long ago, I read a paper not at all related to CV19, where the researcher postulated that seasonal flu might be passed via insects, a hypothesis that might explain how things like Spanish flu seemed to spontaneously pop up in different regions of the world at the same time in absence of wide-spread international air-travel, where some thoughts of avian spread were falsifiable because birds migrate with seasons while bugs don’t (why would avian-spread viridae spread in places from which the birds had decamped for warmer climes?). It’s the bugs, dammit.

BTW, human-to-Human transmission for respiratory viruses has never been proven; in fact, ethically dubious human tests during the Spanish Flu failed to demonstrate H2H spread by having Navy test subjects (“volunteers” facing brig time) talk at great length with victims in close proximity and even having the sick cough and sneeze in their faces. Go figure. Any time an ‘expert’ says a respiratory virus is spread H2H, it is purely conjecture; they may as well be saying the spread is by Dark Matter or even Chocolate Bunnies. I think its the bugs in hospitals and care homes. Kind of like the Black Death (plague, not cops).