The Age of Entitlement - Christopher Caldwell

This one was recommended in the Peak Stupidity comment section quite a while back by Mr. E.H. Hail of the Hail to You blog. 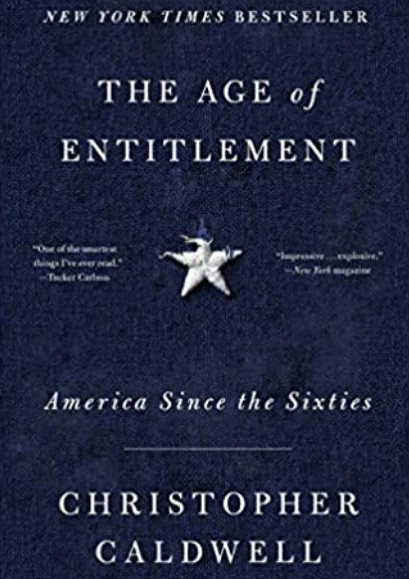 It's been quite a while now since I read this book. This is not the best way to write a review, though I have the book on me still and will refer to a few parts. The gist of Christopher Caldwell's '20-copywritten book The Age of Entitlement is that the Civil Rights laws and court decisions have become a 2nd US Constitution, one that is nowhere near in harmony with the original. The great body of legislation passed in the mid-1960s by a Democrat Congress and gladly signed by the Socialist scumbag Lyndon Johnson was not nearly the whole body of this new constitution. The rest of it was written up by activist courts over the ensuing years, and is on-going today.

I have no problem with Mr. Caldwell's big thesis here. I don't get the idea from this book that the author is any big Constitutionalist, though, who would have voted for Barry Goldwater if he could have.* Though he mentions the big loss of freedom of association, due to those early efforts to force black and white people together in the 1960s and '70s, one gets the feeling that Mr. Caldwell would have been, and still is, one of those well-meaning do-gooders that he rightly sees as the cause of all this horrible change to American politics.

In fact, after the introduction, entitled 1963, the next two chapters, (2) Race and (3) Sex, had me almost sending this book right back to the library prontomundo. Regarding the former, let me say that I'm pretty sure Mr. Caldwell wouldn't get caught dead reading any Paul Kersey material. In this chapter on race, Mr. Caldwell does a nice job explaining freedom of association and then some of the staged ploys to claim discrimination that the left did in the 1960s and still does. However, throughout the chapter, I got the feeling that this author had no idea of what the South had been dealing with. He sounds just like the arrogant Northerners of yesteryear, who had no clue how certain black people behave. The chapter ends with his noting that civil rights had been sold differently to the American people from the way it went down. He still mentions this "especially shameful history." Ahhh, bullshit.

Next, in the chapter on feminism, it's the same story. Mr. Caldwell noted that feminist policy too was implemented by courts with new "court-mandate rights - of all kinds". He did a good job on explaining the passing but non-ratification of the moribund Equal Rights Amendment. (They tried, from '72 through '77, with 35 States ratifying - thank you, 15 sane States!) However, my reading of this chapter, is that, from its beginning to end, the author is perfectly fine with feminism in principle. In the 1st half of Chapter 3 he pretty much just badmouths those bad old days (before Maude?) in which goils were goils and men were men ...**

In Chapter 4 on War, Vietnam, that is, Christopher Caldwell writes a nice summary of that era, but still has this bit about "those who were heroically fighting for equality" [p. 76]. In Chapter 5 on Debt, I did not agree very much with his take on President Reagan. Sure [p. 110] candidate Reagan may have promised to undo affirmative action "with the stroke of a pen", but he couldn't, and he couldn't just abolish the Dept. of Education as promised due to, oh right, a highly Democrat-dominated House of Representatives his ENTIRE time in office - it averaged 59% Democrat over those 8 years. The same goes for Mr. Caldwell's assertions on the next page about the debt, that Mr. Reagan just up and borrowed way more than he spent. Hey, Caldwell, Mr. Original-Constitutionalist! Have you ever read Article 1? Congress writes the budget. Reagan was damn close to auto-veto-override mode by Congress, with it only taking from 45 to as low as 18 R traitors out of the 435 critters to do this.

The rest of the book, on Diversity (incl. Political Correctness), Winners, and Losers is to me a nice job by Mr. Caldwell. He lays out the BS that Americans have been subject to very well. I would say a bunch of the thoughts there could have, or may very well have, been taken straight off of Steve Sailer blog posts. (He includes the story of the always colorful (well... ) Miss Rachael Dolezal even!)

Let me bring up one more pervasive problem I saw in the writing in The Age of Entitlement. It's something that I will explain better in a someday-upcoming review of Strauss & Howe's Generations/The Fourth Turning. Basically, Mr. Caldwell has too many episodes of Strauss-Howe syndrome, which, by my definition, means the explaining of his point with cultural/artistic/entertainment very specific happenings. To paraphrase this generically: "By the early 1980s people were more like this, as we note from these lyrics in this song by Frankie Goes to Hollywood, along with two different movies that came out that had people that acted just like that. One of them said "blah, blah, blah", which is just another example of how people were getting to be like this." There is way too much of this Strauss-Howe syndrome in the book, unfortunately, for those who can detect generalized bullshit that can be supported or debunked with many different examples from the same period.

To summarize, The Age of Entitlement is a very readable book with lots of red meat for Conservatives who understand the cultural destruction and destruction of the old at least semi-Constitutional US of pre 1963. It'd be great if others, who do not understand yet, would read it. However, likely because the author wants to keep his various editor and opinion writer jobs, he couldn't go all full-truth conservative on the race and feminism chapters. He's got the few screwed-up ideas I mentioned above and that annoying Strauss-Howe syndrome too.

I still recommend this book, with a warning that you are probably not gonna like Chapters 2 and 3, at least. It's a good short history of the misery that has been foisted on straight White men over the last 58 years by many stupid do-gooders along with a few evil ones in the name of "Civil Rights". It's not been civil at all, and we have almost no more rights. Decent job, Chris Caldwell, decent job.

Moderator
PS: "Did I miss something, or is Derb’s “We Are Doomed” not one of your reviews?" No, that wasn't me. This whole site screams "We Are Doomed!" though, if that helps... ;-}
The Alarmist
PS

Did I miss something, or is Derb’s “We Are Doomed” not one of your reviews?
Moderator
PS: Well, sure, there are people behind the scenes that likely write in their requested appropriation levels, but, either way, if Reagan could have gotten more of what he really believed in accomplished, we'd be better off for it.
MBlanc46
PS You don’t really believe that the House actually writes the budget, do you? Whatever the Constitution says/