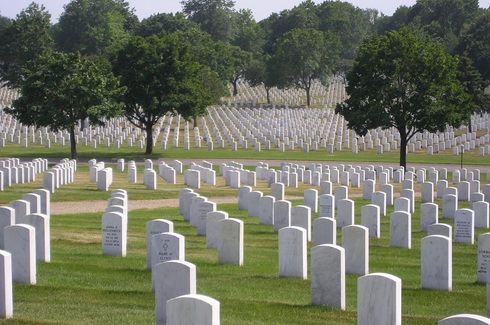 Fort Snelling was built early in the 1800s, when Minnesota was part of the American Western frontier. Parts of it were used as a graveyard for American military men starting in 1870. The original fort is on the east side, but the cemetery sits on the due south side of the Minneapolis-St. Paul airport, just north of the Interstate 494 and the Minnesota River, nestled between runway 30R and runway 35 of the airport.

While doing business in the area of the airport, I passed by the neatly organized grid of simple graves each marked by a white cross. The graves go out from the road as far as the eyes can see over the low rises, and it takes a minute to go past them all at 40 mph or so. Per wiki, there are just barely under one quarter of a million graves there, on 436 acres, which is over 2/3 of a square mile.

Then, I looked out at the streets again on the other side and the people in the light rail cars. This is likely not the most intense area of Somaliland in the formerly Great White North city of Minneapolis. However, there were plenty non-normal Minnesotans, if I can put it that way, in the area. The MSP airport area in general has very many, doing that work that Minnesotans apparently won't do anymore. (Well, it's hard when the Somalian lead won't hire Americans so readily ...) Don't get me started again* on the whole farce of a TSA that searches up American grannies and toddlers, yet allows Somalians to work out on the ramp among the airliners - oh, yeah, thorough background checks were done on all of them, THOROUGH, I tells ya'!

What'd those men buried in those quarter million graves with the white crosses die for? What would they think if they could see past the manicured green grass over to the road or out to the city on the other side?

* Something like it, though, is in this old post of ours - .Minnesota Nice, terrorists, and the Security State.

Moderator
PS: Rex, from what the iSteve commenter Reg has written, they are supposed to be a lot less trouble than the black people out of Chicago. However, they are even more foreign and inscrutable, is the way I'd put it. I have no particular wish to live in Somalia, so I resent it when I feel like I am there, while in Minneapolis. I imagine it was much different back in 1986.

The first time I'd seen the place was just after that, on a road trip across the country in the late 1980s. It was pretty nice then.
Rex Little
PS Last time I was in Minnesota was in 1986, so I have no first-hand knowledge of what it's like now. Are Somalis really a problem? (For various reasons, I'd expect them to be better behaved than American blacks.) Do they act as part of the "black community", or do they stay pretty much in their own enclaves?
Ganderson
PS
Both mom and dad would be shocked at what we’ve allowed the Twin Cities to become. Saddened, too.

My dad was a WW II vet- spent most of the war, to paraphrase Lonesome George Gobel, keeping places like Ft Bragg and Ft Sill safe from the Nazis and the Japs. If you check the record, you’ll see he did a pretty good job....

Nothing really heroic about his service- not that he ever claimed so- just another guy who did his bit.

I often wonder about my grandma- she sent three boys off to the war; only two came back. Did she entertain the notion that if she’d never left Sweden her son would not have died in the Philippines? Probably not, as people were more stoic back then. Uncle George is not at Ft. Snelling, he’s at an American Cemetery outside Manila. The
The Alarmist
PS

I have a “footprint” in several countries ... Life was much more fun when one didn’t have to choose the least bat-shit crazy place to center one’s life, much less quarantine for a couple weeks each time one crossed a border.
Moderator
PS: Were they both military vets, Mr. G. or was your Dad?

I was under the impression that The Alarmist resides in England. We'll find out shortly. Regarding the French police, something tells me that they are in general closer to the French people than cops are to us. (I mean city police forces more than rural Sheriffs and deputies.)
Ganderson
PS

Mr Alarmist, you live in France?

It’s common for we who live in the Anglosphere to make fun of France, but a huge amount of our cultural inheritance comes from there, never mind the food and wine. And if the French can reclaim their country, maybe we can reclaim ours.

I’ve said this many times; the Twin Cities was a wonderful place to grow up- it saddens me no end to see what’s happening there.
The Alarmist
PS

I used to occasionally do funerals with the base honor guard, and some of the national cemeteries are serene and almost surreal. I once saw gravestone with a guy from WW2 who had the same name and rank as I, who died at the old age of 24 ... I had made it to 25 at that time, so I guess I had cheated death, at least for that time.

I’m currently watching a very pretty Jeanne Quancard reading today’s news; the French people and the police are outraged at the level of violence directed at the police, and have conducted mass rallies in their support. If only Americans could show a similar level of concern, but then again, the French cops aren’t taking many knees. The French military has weighed in that they won’t sit on the sidelines if the government doesn’t crack down on the Vibrant denizens in the Banlieue. Interesting times indeed.
Ganderson
PS My mom and dad are buried at Fort Snelling