Peak Stupidity has mentioned VDare's Allan Wall before, in posts and even our almost 5 year-old review of the site. He's one of the originals and one of our favorites of the many great writers featured there.

Allan Wall's latest column, Soros Evangelical Russell Moore Still Shilling For Left, Teams Up With Dubya To Promote Mass Immigration* is great reading for one thing above and beyond the normal good immigration stupidity reporting. He's branched out just a tad, maybe as much as VDare would be happy with, into the Kung Flu stupidity.

Mr. Wall is a very civil, low-emotional-content writer, with just the facts and his gleanings from his experience. Though most VDare writers stick pretty strictly to the mission, reporting on all things immigration, in this one, Mr. Wall's opinion on the PanicFest shines through. It’s pretty hilarious too, and I haven’t noted his sense of humor before. I’ve never heard the term “Flu Manchu” before, but I like it and am kinda pissed at myself for not thinking of that one. Next, this guy uses the term “face diaper” right in this VDare article.

The subject of this column is an alleged Christian leader who's been discussed on the site before multiple times, one Russell Moore. Mr. Moore is a stupid pretentious cuck, and this column has plenty of his latest stupidity (maybe just plain evil against the American people) on display. 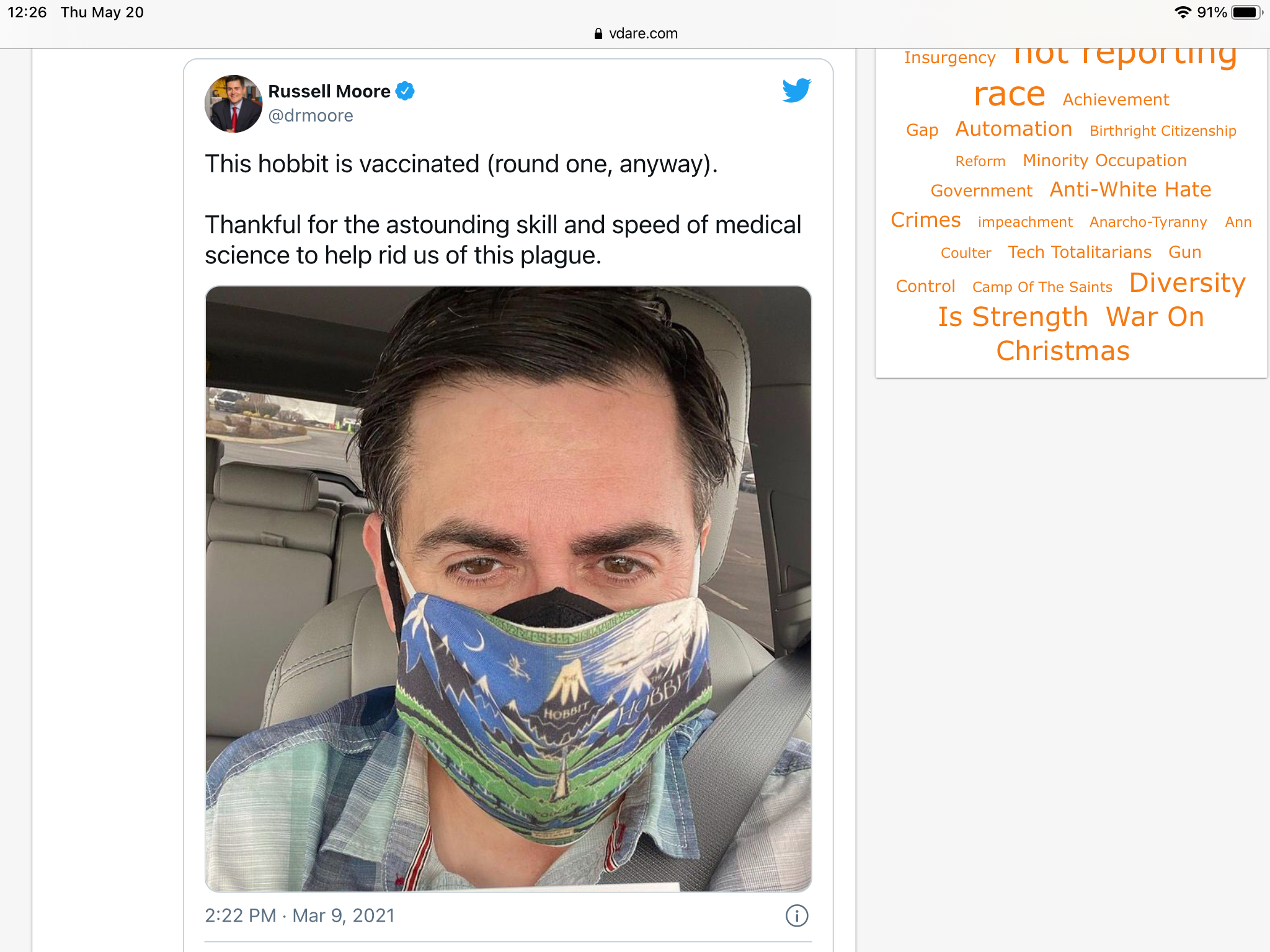 Allan Wall's words regarding the above tweet are some of the funniest I've ever read on VDare:

Such is Moore’s enthusiasm for what skeptics call the face diaper that he wore two the day he received the first of two inoculations. And he added this corny message: “This hobbit is vaccinated.”

Hobbits are probably smarter than Moore because they drink beer and smoke pipes and don’t fret about viruses.

LOL! You don't expect that out of the staid, serious, and erudite crowd** at VDare.

But wait, there's more!! In the process of eviscerating Russell Moore, Mr. Wall, brings up a zoom call between him and ex-Presidente Jorge W. Boosh. I had not read before of Mr. Bush's new open borders pushing book called "Out of Many, One", and I wish I never had. The author has a lot to say about this guy too, who is turning into possibly one of the worst ex-Presidents EVAH.

Please read this latest Allan Wall column, Peak Stupidity readers. You will enjoy it immensely. You rock, Allan Wall! VDare is likely to get a strongly-worded letter about this guy from one of us.


* “MEMO FROM MIDDLE AMERICA:” appears before the main title. It is just the heading for many of his columns, seeing as a decade or so ago it used to be “MEMO FROM MEXICO”, written when he and his family lived there. His other columns, in which he gives us the real scoop as a Spanish-speaker, are usually “SAID IN SPANISH”

** Excepting one Lance Welton, who is a bit off the wall sometimes.

W should go back to painting crappy pictures of all those soldiers he got maimed in his bogus war. What a piece of s**t. Who was the last President who really liked America and Americans? Trump, maybe, although for him America is pretty much just Manhattan and some golf resorts. Reagan? Kennedy?
Adam Smith
PS: Robert's Dog 4 President!

☮
Moderator
PS: Robert, I always like that band name. I may have heard a song or two I like by them embedded in an unz.com comment thread, but that's about all.

Robert's Dog '24!
Robert
PS: I notice that one of your categories is:
Dead/Ex- Presidents

Apropos of that, I recently heard that the Dead Kennedys are back. They never impressed me much, but I did like the (former) Singers name --- Jello Biafra. I know nothing about him, but I would take him over our current un-dead/not-president. Hell, my dog would do better --- she is very good at eating, barking, and pooping. Can Dear Leader say the same?

P.S. That was a good article, and Russell Moore is a Poop-Head.