A blast from the past, and Jimmy Buffett

We are extremely bad about missing anniversaries of historic events here at Peak Stupidity. I'd thought I was only a week late, but this one is a year and a week late, I realized today. 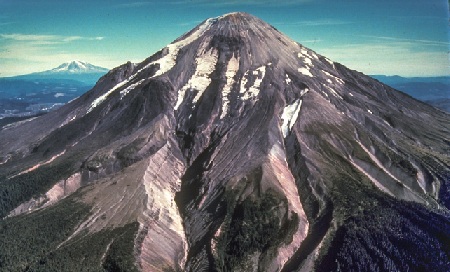 A couple of months over 41 years ago, in March of 1980, many earthquakes, not damaging at 4 to 5 on the Richter scale, and build-ups of magna pushing out portions of the rock gave loads of warning that "this thing is gonna blow". The few people that lived in the area, other than lodge owner Harry Truman** staying at the shore of Spirit Lake, evacuated upon orders of Governor Dixie Lee Ray. This story was on the news as I recall, quite a while before the event. On May 17th, 50 carloads of property owners went up to retrieve their important stuff. 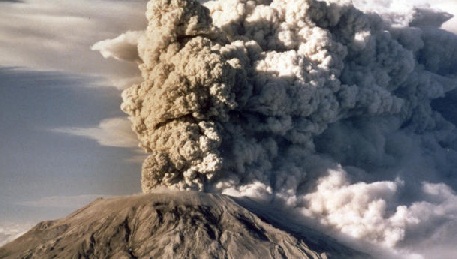 There aren't that many good pictures. Not everyone and his brother had a camera on him back then.

At 8:32 A on the 18th of May, after no significant warning signs earlier that morning, a huge landslide of 0.7 cubic miles of material moved down the mountain at 110 - 155 mph. That exposed the magma and steam under pressure which proceeded to blow up the top 1,300 ft. of the mountain. Wikipedia has a pretty good account here, and I'll give a few more factoids taken from there.

A pyroclastic flow consisting of very hot volcanic gases, ash and pumice formed from new lava, as well as pulverized old rock, moved down the mountain northward, accelerating quickly to around the speed of sound. It ended up covering 230 square miles. More than 4 billion board feet*** of timber was destroyed or damaged.

An ash cloud blew out and up to 12 miles high. The winds aloft ended up dropping it mostly to the northeast, covering eastern Washington State and many areas well east in fractions to a few inches of ash. The total area covered was 22,000 square miles. Ash continued exiting the volcano for 10 hours. A total of 540 million tons, or 0.3 cubic miles (uncompacted) of ash was thrown out.

From 55 to 60 people were killed by the volcano, most by asphyxiation and some by burns. Harry R. Truman was one of them. Spirit Lake, near which the man died at his lodge, is filled with blown-down trees to this day.

I was young at the time, and didn't realize what a major event the eruption of Mt. St. Helens was.


Mt. St. Helens from a Piper Chieftain, 20 years ago and 21 years after the eruption: 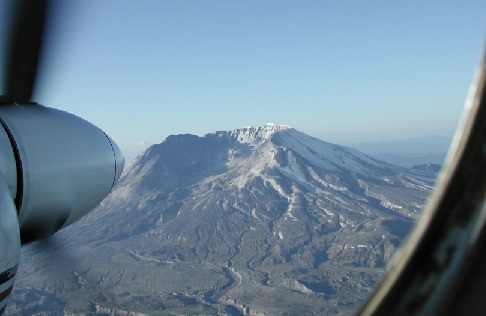 For the Parrotheads, this is a really fun song, even by Jimmy Buffett standards. It was released 9 months before the Mt. St. Helens eruption, as the title song of the Volcano album****. Hey, White Man's reggae. No bitching about the White Man, just about nature. Sweet!

OK, Mr. Buffett used to write lyrics that would date the music occasionally, and this is one. I'll include the last part:

Let's see. I get the reasons for about half of those. How 'bout you?


The Coral Reefer Band (at the time) was:

(Wiki has info on more musicians playing on this song.)


* It did have visible changes since early that Spring due to the build up.

** Harry R. Truman, not to be confused with Harry S. Truman, was a businessman, bootlegger, prospector, and lodge operator.

*** One board foot is one square foot of 1" thick lumber.

**** That album has quite a few good ones. The hit single Fins is good, but I like Boat Drinks better, along with Chanson Pour Les Petits Enfants ("Songs for the small children").

Robert
PS: I remember 'them' saying that nothing would grow there for hundreds of years. Now there is some kind of controversy about a road being put in, but we can't do that because it would upset the ecology. I should look up the details, but I am too lazy.

Mother Nature is far tougher than the Gaia worshipers give her credit for.
Moderator
PS: Yeah, that's a much better title, Alarmist. Fixed!

Hey, Rex, it's a pun too right? I wasn't sure which way to write it. If they spell it that way on the Karaoke screen I'll go with that. Fixed, too.
Rex Little
PS One of my favorite Buffett songs, and part of my karaoke repertoire. One quibble: it's "love-a", not "lava".

I figured the keyboard player had to be named Utley, since Buffett calls him by name just before his solo after the third chorus.
The Alarmist
PS