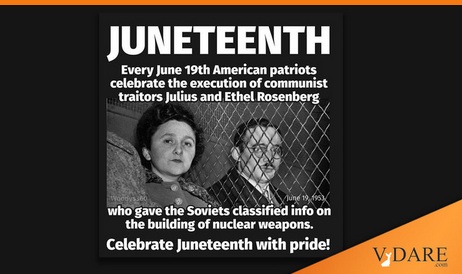 (Image off of VDare)

That's Peak Stupidity's feeling after not just hearing about this Juneteenth holiday bill being passed, but additionally by how many votes. I could go on about the cowardice of many of the American people, tempered with the thought that, yes, you often put your status in the neighborhood and even career on the line. However, the disgust in this post if for our supposed representatives and the elite Senators in the Feral Government.

VDare's always on-the-money Washington Watcher II gave us the sad disgusting story of the votes of these cucks in his pre-Juneteenth article GOP (With Brave Exceptions Like Rep. Matt Rosendale) Rolls Over For Anti-White Juneteenth Scam. The voting was sickening: Unanimous yea's, or at least no nays in the Senate and 14 nays in the House.* Though he helped encourage this whole piece of bullshit, Zhou Bai Dien himself didn't have to be a factor. Even the severely math challenged can see that this one would override a veto.

A commenter on the Unz Review argued to me that this was not cowardice but just the normal purposeful destruction of America by these guys. I don't buy it for most of the R's, at least those in the House. They will vote for the destructive wars, the immigration invasion, and the corporate welfare ("invade the world, invite the world, in hoc to the world", in Steve Sailer parlance). They have donors to please, of course. The voters come 2nd or lower. In my mind though, many of these guys are not out for the purposeful cultural destruction that the ctrl-left, of which the D squad is almost completely comprised, is.

These Senators and Reps must know that they have so many constituents seething with hatred for their cowardice, but then, that's not as bad as being called names. No, of course not!

The whole thing disgusted me so much, I didn't feel like even writing about it before. Here are the 14 Congressmen who voted nay:

All Red squad - should we congratulate them? What's the point?

* I am not sure how many abstentions there were in each body. That's a cop-out anyway. "Yeah, my alternator broke, and I missed my flight. I missed the vote by THIS MUCH. Yeah, CPAC audience, I had my nay vote in my hand even, yeah, that's the ticket."

Moderator
PS: I'd read of this Juneteenth only in the last couple of years, and that was on Steve Sailer comment threads, of course deriding it.

I've never heard it from a live person.
Robert
PS: Mr. Smith --- Did anyone here ever hear of “Juneteenth” before this (or maybe last) year?

About twenty years ago, in Austin Texas, it was a minor thing. I think some of the Dark complected locals took it as a day to barbecue and drink, but that was about it. I don't think anyone even in the Northern half of Texas cared about it then.

One guy (Light complected) got upset when I mentioned that Slavery actually lasted six more months, in these gloriously United States.

Fun fact: On March 22, 1873, the Spanish National Assembly finally abolished slavery in Puerto Rico. The owners were compensated with 35 million pesetas per slave, and slaves were required to continue working for three more years.
Adam Smith
PS: Good evening everyone...

Did anyone here ever hear of “Juneteenth” before this (or maybe last) year?

But, like you say, just an average weekend in Chicago.

☮
Moderator
PS: I love the Chicago song, Alarmist. I don't know that much of their music, but I had Chicago IX, which was a greatest hits collection.

Nowadays "Saturday in the Park" is followed by "shots rang out".
The Alarmist
PS

@Mr. Ganderson, the pop-group Chicago had a song that sums it up: “Saturday in the Park.”

Juneteenth wasn’t a thing back then, so they chalked it up to the Fourth of July.
Ganderson
PS

Mr. Blanc, From what I read on Hey Jackass, your county had a heck of a Juneteenth weekend, although I guess not much different than a normal one.
The Alarmist
PS

Let’s just call it is, which is a separate-but-equal holiday. If the US wasn’t being run by a MoG, I’d say it is a good start, but the heritage Americans are headed toward being the ones riding in the back of the bus. Jim Crow is now Eat Crow.
Dieter Kief
PS This might be one more piece in the puzzle which - when finished - will show, that Charles Murray is somehow depressingly right. - You are either willing to "face reality" with Charles Murray (et. al.) . Or you will lean towards compromises, attempts at calming down the beast, ...trying to win time... and by the way crawl ever deeper into this Gold Mine mine, where more and more weird scenes are waiting to be - aacted out...
The Doors - Weird Scenes Inside the Goldmine... - Play it Again, Sam...
MBlanc46
PS This is, and was meant to be, a massive middle-finger to Heritage Americans. It ought to be the wake-up call for some normies. It certainly shows that the Republicans are of no use. In fact, they’re a hindrance. The best that you could say for anyone who refused to dissent from this is that they think that this, finally, will pacify the Negroes (and the Left). No one that dim is of any use.
Moderator
PS: Peter, yeah, we won't have the big-letter posters hung around shamed White people's necks or pig blood being poured on them, but we may be already ahead with some of this. They just didn't have the sophisticated electronics in 1960s-'70s China to keep track of people in order to keep them out of jobs, their bank accounts, etc. as we have now.

OTOH, I don't know when, but at some point some guns WILL come out. That's something that was unfortunately not possible during China's experience.
Moderator
PS: Yep, Lincoln did that only for the sake of the (illegitimate) war effort, Robert. I guess they'd better figure this stuff out. Perhaps they could at least come up with a whole week. Besides being about humiliating the White Man, this was also about days off.

Black employees of the Feral Gov't were probably wondering, with the little sick time they probably have left, how else they were going to take a 3-day weekend.
PeterIke
PS
Our politics really has become one of ritual humiliation for the legacy white founding stock and any later white arrivals who identify with them.

Mao's Cultural Revolution was cruder with its images of shattered people forced to wear dunce caps and etc. We're just more sophisticated in how we go about it, but it's the same impulse behind it. It's notable too that in the Cultural Revolution many of the worst enforcers were women, just like today.

These things ultimately end in slaughter unless they are somehow cut off. I don't know if we'll veer that far into true French Revolution style politics, but we're sure trending that way. Remember how the Revolutionaries changed the names of the months? Well we now have a holiday based on a totally made up name, Juneteenth. The Frenchie name for this time period was Messidor, which in fact started on the 19th of June. It means "harvest." The question is, what shall we harvest? Or shall we reap the whirlwind?
Robert
PS: The really hilarious part of this Juneteenth crap, is that slavery was still legal (but only in those states that had fought to end slavery). Some kind of Amendment needed to be passed. Maybe you could have a post about that.